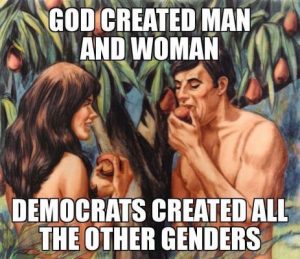 VANCOUVER, March 28, 2019 (LifeSiteNews) – A B.C. human rights tribunal has ruled that a Christian activist discriminated against a man who claims to be “female” by distributing flyers that referred to the man, who was running for political office at the time, as a “biological male.”

The court ruled for transgender activist “Morgane” Oger, born Ronan Oger, and against Christian activist Bill Whatcott by declaring it’s discriminatory not to accept transgender people as the gender they claim to be.

In a 104-page ruling released Wednesday (read full ruling below), the tribunal further declared there’s no room for any public debate in the matter, according to the Vancouver Star.

The tribunal also ordered Whatcott to pay Oger $35,000 in compensation for injury to his “dignity, feelings and self-respect,” and an additional $20,000 to Oger for Whatcott’s alleged improper conduct during and before the hearings, it reported.

Whatcott, 52, described the tribunal hearing as a “kangaroo show trial” and said he’s not surprised by the decision.

“Jesus Christ is still Lord and he will come again, I put my hope into that,” he told LifeSiteNews.

John Carpay, president of the Justice Center for Constitutional Freedom, which intervened in the case, decried the ruling as harming democracy.

“The Supreme Court of Canada has long held that freedom of expression is the lifeblood of democracy,” Carpay said in a press release.

“Society is full of people with diverse views and the Tribunal’s decision undermines the foundational principles of the free society and jeopardizes the health of Canada’s democracy,” he said.

Oger, who is vice president of the B.C. NDP, launched a discrimination complaint against Whatcott after the Christian activist distributed flyers in Vancouver-False Creek riding in 2017 when Oger was running as MLA for the B.C. NDP.

Whatcott’s flyer asserted Oger “is a biological male who has renamed himself ‘Morgane Oger’ after he embraced a transvestite lifestyle,” and can be found here.  Read more here