What and Who is a True Christian? 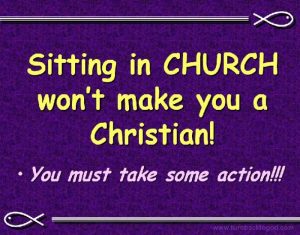 Simply put.. the person who has accepted Jesus Christ as Lord and Savior. You have become “Born Again” as Jesus said you must be!

You believe that he died on the Cross of Calvary, Rose again 3 days later and is now at the right hand of GOD the father. You have had a life changing experience. You know that you are saved without a doubt. You have ASKED Jesus to come into your heart and life. You want to tell others about Jesus, how the burdens were lifted from you and how cleansed you feel. You are hungry for more of the word of God and now see how you were deceived by Satan.

I get mails from many of you who have turned to Witchcraft and Satanism saying ” I used to be a Christian.” You are deceived in your thinking about what a Christian is. A Christian is more then just being a member of or attending church.

This will offend many reading this, but there are masses that have been in church all their lives and think they are a Christian. Does being in a Barn make you a Cow or Horse? NO! If you put a dress, hat and lipstick on a pig, is that pig a woman? Of course not, and merely doing things Christians do does NOT make you one!

Churchianity: “Christians doing Christian activity based on the concepts of man! This is Modern Christianity” – Jon Watkins

Someone who is truly born again would NOT fall away from Jesus. This does not mean that a saved person can’t as we say “backslide” or get angry with God. You were merely a church member or attendee just like so many of those who are there now. You never met the King of kings, professed him with your mouth and put him in control of your life!! There has never been, nor will there ever be a true Christian who will turn to Witchcraft and Satanism or become an Atheist. Your concept of what a Christian is has been corrupted by all the idiocy that exists in the church. You are not born a Christian or into a Christian Family. You have not been confirmed to be one by a priest or by being Baptized. You are not one because you went to a Catholic school, Catholic Church, or any other denominational Church. You are not one because you have a Bible, went to Sunday school or passed a bible study class.

What do you believe?

Do you believe the Bible is Gods Holy word? Old and New Testaments? Jesus said in Matthew 5:17 Think not that I am come to destroy the law, or the prophets: I am not come to destroy, but to fulfill.

Do you believe Jesus was born of a virgin and is the son of God?

Do you believe in Salvation by accepting Jesus as Lord and Savior? Jesus says in.

John 3:16 For God so loved the world, that he gave his only begotten Son, that whosoever believeth in him should not perish, but have everlasting life.

John 3:17 For God sent not his Son into the world to condemn the world; but that the world through him might be saved.

John 6:40 And this is the will of him that sent me, that every one which seeth the Son, and believeth on him, may have everlasting life: and I will raise him up at the last day.

John 6:47 Verily, verily, I say unto you, He that believeth on me hath everlasting life.

If you do not then how can you call or have called yourself a Christian? You cannot take bits and pieces and use what you want.

A saved person can stray from Jesus for awhile but that person will be miserable and will get back in Gods will. I know I have done it twice.

NO…. you most surely were never a Christian!!!!

Now go here, repent and say the Sinners Prayer if you want to be Saved, Born Again!