No, He did NOT! Not the True God of Heaven. He probably was listening to Lucifer whisper in his ear and gave into lust and desires! 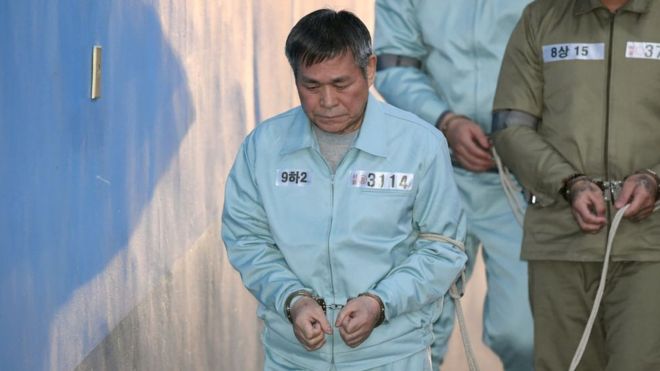 His defense? It was an “order from God”!

“I was unable to turn him down,” the woman said. “He was more than a king. He was god,” she added, noting that she had been a member of the church since childhood.

The church was ejected from the Christian Council of Korea in April 1999 over a “heretical claim” allegedly made by Jaerock Lee in July 1998, when he stated that he was “sinless and exempted from dying” Source: Wikipedia

South Korean megachurch pastor Lee Jae-rock was sentenced to 15 years in prison for raping eight female followers, and telling them it was God’s will.

The Korea Times reported that Lee, the 75-year-old pastor of Manmin Central Church, was found guilty on Thursday of using his power and status to force the victims, all in their 20s, to have sex with him, saying that it was an “order from God.”

The Seoul Central District Court also ordered the church leader to take 80 hours of therapy classes and banned him from working with youth institutions for 10 years after his prison term.

The court found that Lee had presented himself as a holy figure of sorts, with his followers too afraid to disobey him.

“The victims have been attending the church since their teenage years and regarded the pastor as a holy figure, thinking that obeying him would open the way to Heaven. So they did not disobey his orders, and he took advantage of this to repeatedly rape and harass them for a long time,” the court said.

One must wonder and ask the question, What was being taught and preached in that false church? It certainly was NOT the True Gospel of Jesus Christ, at least from the leader!

Lee, whose church claims over 130,000 followers, was arrested back in May on charges that he raped at least eight women on nearly 40 different occasions.

He insisted that the victims are intentionally defaming him and that they could have spurned his advances.

The court rejected the argument, however, noting that “there was no reason for the victims to accuse him falsely because they themselves would face shame and public attention.”

“The pastor praised himself as a holy figure. The victims believed him as such a figure and that the sexual acts were God’s will,” it added.

One of the victims, who wasn’t named, told local media earlier this year that Lee would call women to his apartment and force them to have sex.

“I was unable to turn him down,” the woman said.

“He was more than a king. He was god,” she added, noting that she had been a member of the church since childhood.

There you go, They are in a Cult!  They are like stupid Catholics who bow and kiss the ring of the pope. I am sure in a church of that size there were women who were groupies and made themselves available to him. I am not condoning his actions at all. Just pointing out there are Harlots in every congregation!!!  Again, the True Gospel of Jesus Christ is NOT being preached there!

Back in April, Manmin (which means “all creation”) defended its pastor, claiming that “false rumors” were being started against him out of jealousy.

The church argued that Lee has long been “stressing the importance of sexual ethics.”

Following Thursday’s ruling, the church said that it would appeal, insisting that the court did not accept material it had offered allegedly refuting the claims of the victims.

The church has claimed that its growth since starting out in 1982 to open 10,000 branch and associative churches around the world has been due to God’s blessings.

“Manmin has experienced such an astounding and rapid growth only in 30 years because, amidst God’s abundant blessings, there are always the messages of life proclaimed by Rev. Dr. Jaerock Lee, marvelous manifestations of the fiery works of the Holy Spirit, and the unceasing prayer of its members,” it says on its website. Source: One of many

Bottom line? He got to big for his britches and like many other fallen preachers, God slapped him down!!