Philippians 3:17-19 “brethren, be followers together of me, and mark them which walk so as you have us for an example. For many walk, of whom I have told you often, and now tell you even weeping, that they are the enemies of the Cross of Christ: Whose end is destruction, whose God is their belly, and whose glory is in their shame, who mind earthly things.” 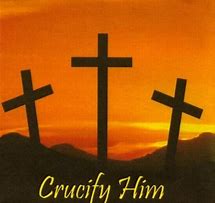 The Judaizers were Jews (or current apostates who wont preach about the cross) who had accepted Christ as the Messiah, but who also insisted that all Believers, both Jews and Gentiles, had to keep the Law. As such, their emphasis was on the law, and not at all on the Cross of Christ. Regrettably, the problem didn’t die with the Judaizers. In fact, it is the problem which plagues the Church even unto this hour.

How much of the modern Church would have to be concluded to be “enemies of the Cross of Christ”? I’m afraid that almost all would fall into that category. Through the Apostle, the Holy Spirit says four things about such Preachers and people, which are:

1. “Whose end is destruction”: If the Cross of Christ is rejected, ignored, or given a secondary position, then destruction is the only conclusion, inasmuch as the Cross Christ alone stands between men and Hell. If we reject the Cross, we have, at the same time, rejected Christ.

3. “Whose glory is in their shame”: The material things they seek, God labels as “shame.”

4. “Who mind Earthly things”: This means they have no interest in Heavenly things; they are merely using the Lord for their own personal gain.
Let us say it again:

If anyone rejects the Cross, they have, at the same time, rejected Christ! Source:  Expositors Word for Everyday November 5th