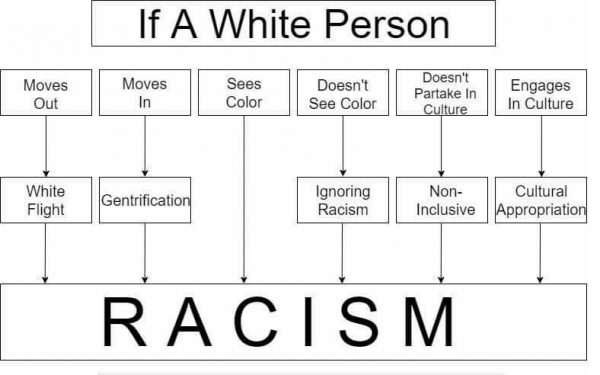 The covert campaign, coordinated mainly on the website 4chan, involved posting sheets of papers reading, “It’s okay to be white,” in an effort to bring awareness to the racist double standard white people face every day.

In the wake of the postings, numerous media reports struggled to describe the campaign, with some calling it the work of neo-nazis, “covert racism,” and “white supremacist.”

Other media outlets went as far as to claim that posting the signs is illegal, while some warned removing the signs could be dangerous.

In the US, posters reportedly hit Boston, North Carolina, Delaware and Texas, where residents in Fort Worth were told to call police if they witness the sign.

“I condemn any type of literature sign that is posted that may be offensive to some folks,” Fort Worth City Councilman Cary Moon said, advising residents that taking down the signs “might interfere with investigations and collection of evidence,” according to CBS DFW.

Elsewhere in the globe, “It’s ok to be white” posters were reportedly seen in several Canadian provinces, the UK, and Australia.

One man in Halifax, Canada, reported seeing a “group of 4 in black hoodies and white masks” posting the signs in the downtown area, which he says he tore down.

So a group of 4 in black hoodies and white masks are posting these signs all over the downtown core.
I've torn down a bunch.
Sone white people really do suck.#halifax #racismsucks @haligonia pic.twitter.com/eXECAAaZMF

“Whoever this moron is this [sic] should be named and shamed,” Hanson-Young wrote on twitter.

Just found this on the street outside my office… Whoever this moron is this should be named and shamed. Pro-nazi slogans like this are not welcome in Adelaide. Go back to the rock you crawled out from and stay there. pic.twitter.com/GViCmJLRY7

South Australian police say they are investigating “the motivation and intent of the persons posting the signs,” adding that they could be fined for littering.

“When the person/s responsible for posting the signs are identified and located they can be issued with a $315 fine plus $60 victims of crime levy for the offence of post bill without consent under section 23(1) of the Local Nuisance and Litter Control Act 2016,” a South Australian police spokesman said, according to The Advertiser.

SA Police also claimed there were rumors on social media that razorblades could be affixed to the posters and warned people to report the signs to police rather than remove them.

The posters appear to be a continuation of a similar campaign launched by 4chan last year, which had equally triggering results.