Grand-daddy Prince Philip: ‘Just too many people to feed’. The Duke of Edinburgh says global overpopulation is to blame for rapidly rising food prices. 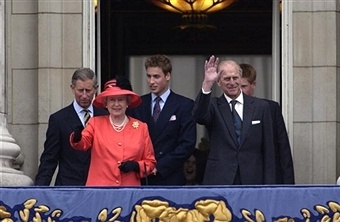 Exodus 20:5-6 – Thou shalt not bow down thyself to them, nor serve them: for I the LORD thy God am a jealous God, visiting the iniquity of the fathers upon the children unto the third and fourth generation of them that hate me; 6 And shewing mercy unto thousands of them that love me, and keep my commandments.

There it is folks! This Satanic Scum wants to see the rest of us dead because they are deranged, inbred Luciferians who hate God and those made in his image!

The Telegraph – Rapidly growing human populations risk having a “terrible impact” on the world, the Duke of Cambridge has warned.

The Duke said that as a result, wildlife was being put under “enormous pressure” and called for the issue to be addressed with renewed vigour.

His concerns echo those of his grandfather, the Duke of Edinburgh, who in 2011 advocated “voluntary family limitation” as a means of solving overpopulation, which he described as the biggest challenge in conservation.

“In my lifetime, we have seen global wildlife populations decline by over half,” he said.

“We are going to have to work much harder, and think much deeper, if we are to ensure that human beings and the other species of animal with which we share this planet can continue to co-exist.

“Africa’s rapidly growing human population is predicted to more than double by 2050 – a staggering increase of three and a half million people per month.

“Urbanisation, infrastructure development, cultivation – all good things in themselves, but they will have a terrible impact unless we begin to plan and to take measures now.”

This royal scum wants you to NOT to have children, but they can have as many as they like! If grand-daddy was so concerned, why did he not STERILIZE Charles? That would have stopped the IN-BREEDING! Why didn’t he have them snip William when he was a baby? Why is William adding to the world population by having children?

It is the old adage, “do as I say, not as I do” mentality. They are more than happy to put limits on you while they enjoy life in abundance.