When Infanticidal Democrats Are Accidentally Correct on Abortion

Trevor Thomas – Recent words by notorious Democrats again prove the old adage: even a broken clock is right twice a day. In this case, we have had two Democrats in less than two weeks accidentally speaking truth to one of the gravest moral issues of our time. 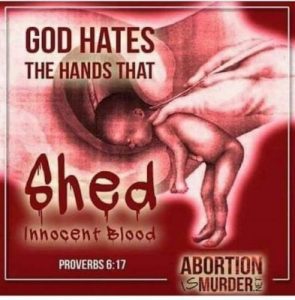 First of all, we have Alabama state representative John Rogers (D). At the beginning of this month, the Republican-controlled Alabama House overwhelmingly passed (74-3) pro-life legislation that would make abortion a felony except in cases where the life of the mother is at risk. The bill will likely not become law, as it will probably die in the Alabama Senate. Aware of this, pro-life lawmakers hope to use the legislation as a means to overturn Roe.

In debating the bill while attempting to defend the indefensible — the killing of unborn children — representative Rogers made clear the Democrats’ position when it comes to the most helpless and innocent among us when he declared,

Note that Rogers here provides us with several bits of rare clarity when it comes to Democrats and the unborn. Repeatedly using the word “kill,” Rogers reminds us what an abortion actually results in: the death of a human being. As a popular pro-life refrain goes, “If it isn’t a life, then why do you have to kill it?”

Also, Representative Rogers failed to resort to the anthropomorphically ambiguous language so common among those who wish to sanitize what is really happening when an abortion occurs. Instead, Rogers made the mistake of referring to unborn children as “kids.” To protect the “right” to kill children in the womb, for decades those corrupted by liberalism have sought to dehumanize the unborn.

Thus, we often hear children in the womb described as a “zygote,” “embryo,” or “fetus.” Though these terms are medically correct, the left employs such language in order to avoid using the more humanizing words such as “baby,” “child,” or “kid.” What’s more, in order to hide their evil behavior toward children in the womb and to further dehumanize the unborn, the left will often abandon medically accurate terminology for unborn human beings and simply make stuff up.

In 2015, writing about the scandal involving Planned Parenthood and the selling of baby parts, Jen Gunter of The New Republic declared, “These are not ‘baby parts.’” She prefers that the “tissue specimen” be referred to, not as a fetus or an embryo, but as a “product of conception.” Gunter declared that the term “baby” doesn’t apply until birth.

Likewise, on CNN recently, breaking trend with Democrats who have been accidently correct on life in the womb, while debating “heartbeat bills” that have become law across the U.S., former Speaker of the New York City Council, Christine Quinn — a Democrat, of course — said,

Thus, the so-called “party of science” again reveals just how much stupidity they will stoop to in order to justify their perverse sexual agenda.

Speaking of stupid, Alyssa Milano has tweeted again. Rightfully ignoring the threats of the ignorant Hollywood elite, Governor Brian Kemp recently signed Georgia’s version of a fetal heartbeat bill into law. Like so many others on the Hollywood left, because of the favorable tax laws passed by Georgia conservatives, Milano finds herself working in Georgia. Being a full-fledged member of the sex-crazed ignorant Hollywood elite, Milano can’t seem to help interjecting herself into Georgia politics.

After Governor Kemp signed the heartbeat bill into law, Milano decided it was time for action. On May 10, through her Twitter account, Milano called for a “sex strike.” She tweeted:

Our reproductive rights are being erased. Until women have legal control over our own bodies we just cannot risk pregnancy. JOIN ME by not having sex until we get bodily autonomy back. I’m calling for a #SexStrike. Pass it on.

It seems that liberals are more clueless about biology than we thought. Seemingly unaware of the irony of her call, pro-life conservatives on Twitter soon clued her in.

Of course, the world would be a much better place if Milano and her ilk — men and women alike — would remain on a “sex strike,” at least until they are in a committed marital relationship. Sadly, this is not the plan. As a Milano supporter in the New York Post reveals, the real desire for pro-abortionists is to turn states like Georgia into states like New York. Because, “if you’re in a place where you can still have abortions, like New York State,” then one can “f— all you want!”

And thus, we see Milano produce even more unintended truth from the left! Without stating so in such clear terms, for decades the left has sold their wicked sexual agenda upon the notion that if voters will just elect Democrats, then one can “f— all you want!” This has resulted in not only a war on the unborn, but a war on marriage, the family, and the ultimate target of the modern left: the truth.

Trevor Grant Thomas – At the Intersection of Politics, Science, Faith, and Reason.  www.trevorgrantthomas.com

Posted with Permission from Trevor Thomas