“They can be disposed of as you wish”

Paul Watson | Summit News – Ireland’s government health body has a section on its website that advises women to flush their aborted babies down the toilet. 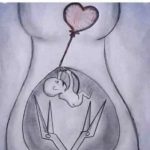 In a section entitled “pregnancy remains,” the Health Service Executive, which uses public funds for the provision of health and personal social services for everyone living in Ireland, tells women how to dispose of an unwanted fetus.

Following a referendum last year, it is now legal in Ireland to get an abortion during the first twelve weeks of pregnancy and later in cases where the pregnant woman’s life or health is at risk.

“If you have an abortion before 9 weeks of pregnancy, you can decide how to dispose of the remains. They can be flushed down the toilet or wrapped in tissue and disposed of as you wish,” states the HSE website.

I used to say that we live in a society which treats its young like a medical waste product.

I was wrong – it’s worse than that.

We live in a society that treats its young like literal shit.