Why? Because of Motivational Speakers like Joel Osteen and other Prosperity Preaching Pimps! They WILL NOT rock the boat and preach about SIN as Michael Snyder mentions in the article below.

One key word here is “WITHOUT” and a second is substituting “Cheating” for ADULTERY! What is a Christian doing going to a strip club? I suppose it makes it OK if you go with your spouse? NOT!

In man’s attempt to soften the tone of the word, many also refer to it as “Infidelity”. Infidelity (also referred to as cheating, adultery, or having an affair) is a violation of a couple’s assumed or stated contract regarding emotional and/or sexual exclusivity. Source

Matthew 5:27-28 “Ye have heard that it was said by them of old time, Thou shalt not commit adultery:28 But I say unto you, That whosoever looketh on a woman (for you ladies a Man) to lust after her hath committed adultery with her already in his heart.”

Psychical Adultery – Did you know, as a Christian, you could be committing Adultery and not know it?

This also ties in with a recent article about Moral decline: 81% said they were worried about the moral decline of America. Well, here you have a prime example of moral decline! 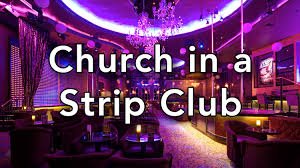 Michael Snyder – If a husband goes to a strip club without his wife and spends hours watching other women dance around naked, would that be considered cheating?  Of course the answer is yes, but I was astounded when I came across a recent survey that found that only 37 percent of evangelical Christians agree with me.  Perhaps even more shocking is the fact that the same survey found that only 31 percent of evangelical Christians believe that “watching pornography without your partner” is cheating.  Numbers like these make me wonder exactly what is being taught in our churches these days.

In America today, most ministers are extremely hesitant to preach hard messages about “right” and “wrong” because there is fear that some people might get offended.

But when morality is not taught, all sorts of crazy things start happening.

For example, there is a “devout Christian couple” down in Florida that claims that they are “spreading the gospel” by having sex with other couples.  Dean and Christy Parave are convinced that their unusual “lifestyle” enables them to share Christ with those that “might otherwise never hear about Jesus”.  When I first came across this story I couldn’t believe that they are serious about this, but according to Christian Today they actually are…

A devout Christian couple from Florida are championing an unusual evangelism technique – swinging.

Christy and Dean Parave met online eight years ago, and began swinging after being approached in a DIY store.

They now regularly swap partners with other couples.

In fact, Dean Parave insists that swinging is an ideal “evangelism technique” because “you can’t get closer to someone than having sex with them”…

“God has put me here to spread his word and our lifestyle community is a great place to do it,” Dean told Barcroft Media.

“You can’t get closer to someone than having sex with them.”

He believes that he’s been given a unique opportunity to share his faith with those who might otherwise never hear about Jesus.

“I’m getting to people that will probably never even visit a church,” he said.

When our churches have no discernible moral standards, just about anything goes.  This is why just about every form of sin that you can possibly imagine is exploding in the evangelical church today.  Since they are not being clearly taught about right and wrong, so many believers are simply doing whatever is right in their own eyes and making up their own doctrines on the fly.

If you can believe it, a new Barna survey has even found that 30 percent of all “practicing Christians” believe that “all people pray to the same god or spirit”…

In a web-based survey conducted in March of 1,456 practicing Christians, researchers asked the sample if they agreed with several statements that are rooted in so-called “new spirituality.” Sixty-one percent of them affirmed at least one of the questions.

Nearly 30 percent agreed that “all people pray to the same god or spirit, no matter what name they use for that spiritual being.” About that same percentage of people said they believe that “meaning and purpose come from becoming one with all that is.”

Progressivism is slowly but surely seeping into even the most hardcore evangelical Christian institutions.  Once it gets a foothold in a church or a ministry, it starts eating away at the foundations like a cancer.  In her most recent blog post, Alisa Childers shared five signs that your church “might be heading toward progressive Christianity”…

5 Signs Your Church Might be Heading Toward Progressive Christianity

1. There is a lowered view of the Bible

2. Feelings are emphasized over facts

5. The heart of the gospel message shifts from sin and redemption to social justice

If you are an evangelical Christian pastor and you are teaching your congregation a “progressive” version of the Christian faith, you need to resign immediately.

What we need are men and women that are willing to be like the great preachers of old and preach about sin, repentance and judgment.  I really liked how Shane Idleman made this point in his most recent article…

Where are the Tyndales and Husses who were burned at the stake for simply declaring the truth? Where are the Luthers who, when asked to recant or face possible execution, said, “Here I stand; I can do no other”? Where are the John Calvins who shaped the religious thoughts of our Western culture? Where are the John Knoxes who cried, “Give me Scotland [for the cause of Christ] or I die”? Where are the Whitefields who shook continents? Where are the Howell Harrises, Daniel Rowlandses, and Griffith Joneses who preached with such passion during the Welsh revivals of the 18th century that we still honor them today?

I say again, “Where are they?” Where are the John Wesleys who said, “Give me one hundred preachers who fear nothing but sin and desire nothing but God, and we will shake the gates of hell?” Where are the David Brainerds who spent so much time in prayer that even the great Jonathan Edwards was convicted? Where are the Robert Murray McCheynes who, even though he died at age 29, was one of Scotland’s most anointed preachers—causing people to weep before even preaching a word (not emotionalism, but anointing)?

I join Idleman in saying “Where are they?”

If there are any still out there, please contact me, because my wife and I would love to hear that kind of preaching.

Of course those that follow my work regularly know that I have never backed away from preaching about sin, repentance and judgment.  Of course preaching the truth has gotten me in trouble with liberal evangelicals, but that is okay.

Those that are preaching that the Bible really isn’t true, and that God never actually judges anyone, and that it is perfectly okay for Christians to embrace sexually deviant lifestyles and still “preach the gospel” are modern day Pied Pipers leading multitudes of deceived believers on a highway that leads to only one place.

Wake up America, because your time is running out.

From The Most Important News – Michael Snyder