The Ancestral Worship of Black Churches 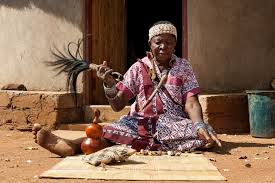 On Sept. 14, 2014 I published an article What is wrong with the world –  the rise of evil. It started out primarily dealing with the Voodoo and Witchcraft on the African Continent. In there you can glean more info into what these Racists that claim to be Christians believe.

The AME Church grew out of the Free African Society (FAS), which Richard Allen, Absalom Jones, and other free blacks established in Philadelphia in 1787. They left St. George’s Methodist Episcopal Church because of discrimination. Although Allen and Jones were both accepted as preachers, they were limited to black congregations. In addition, the blacks were made to sit in a separate gallery built in the church when their portion of the congregation increased. These former members of St. George’s made plans to transform their mutual aid society into an African congregation. Although the group was originally non-denominational, eventually members wanted to affiliate with existing denominations. Source Wikipedia

Veneration of the dead

The veneration of the dead, including one’s ancestors, is based on love and respect for the deceased. In some cultures, it is related to beliefs that the dead have a continued existence, and may possess the ability to influence the fortune of the living. Some groups venerate their direct, familial ancestors; some faith communities, in particular the Catholic Church, venerate saints as intercessors with God, as well as praying for and to departed souls in Purgatory.

In Europe, Asia, and Oceania, and in some African and Afro-Diasporic cultures, the goal of ancestor veneration is to ensure the ancestors’ continued well-being and positive disposition towards the living, and sometimes to ask for special favours or assistance. The social or non-religious function of ancestor veneration is to cultivate kinship values, such as filial piety, family loyalty, and continuity of the family lineage. Ancestor veneration occurs in societies with every degree of social, political, and technological complexity, and it remains an important component of various religious practices in modern times. Source Wikipedia

The Universal Religion of Africa

Ancestor Worship: The Religion of Africa By Paul K. Williams

It makes no difference whether a person is educated or not. At a Zulu College of Education when someone stole a TV set the students seriously considered calling a witch doctor to determine who did it. (That threat worked, for the TV was returned one night.)

Their Concept of God

Africans believe in a supreme God, whom the Zulus call UNkulunkulu; however they do not understand him. To them he is far away. He sends thunder on people for unknown reasons and sometimes does bad things. It is impossible for living people to communicate with him but when a person dies his spirit goes to that land where UNkulunkulu lives. That spirit then can have some influence with him and can have influence on the lives of people living on the earth. The ancestors stand in relationship to UNkulunkulu in much the same way as the Catholic saints stand in relationship to Jehovah.

A Religion of Fear

Ancestor worship (sometimes called “animism”) is a religion of fear. The believers are always in fear of angering the ancestors. When anything goes wrong the sangoma is consulted. Invariably the diagnosis is that the worshiper has angered the ancestors and that a feast must be held. A feast is expensive because everyone must be allowed to come and eat. A cow or a goat is killed by the witch doctor in a traditional way, much beer is made, and great pots of stiff corn meal porridge are prepared. All relatives and friends and neighbors attend and many get drunk. Of course, the witch doctor gets a nice fee for his services plus the best piece of meat.

Older people are greatly honored because they will soon become ancestors. It is to your advantage if the old person dies liking you. Then he or she will be willing to help you from the spirit world.

It is a backward-looking religion. The standards of the ancestors are the all-important things. This retards progress because progress is not according to the traditions. I think this is one very big reason why Africans failed to progress in scientific knowledge the way the Europeans and Asians did. As with the ancestor-worshiping American Indians, not even the wheel was known until the Europeans arrived.

The more I see of this religion the more I hate it. It breeds hate, suspicion and fear. There is nothing ennobling about it. The worshipers are truly slaves.

The Bible is uncompromising in its condemnation of ancestor worship and all the ceremonies that go with it. I have been surprised to see how often this false religion is condemned in the Bible. Some passages which we have typed out and duplicated for use in teaching on this subject are: Deuteronomy 20:2-6; Matthew 4:10; Acts 10:25-26; Revelation 22:8-9; Leviticus 19:31; 20:6; 20:27; Deuteronomy 18:9-15; and Isaiah 8:19-20. There are many other passages which show that the dead have nothing to do with the living.

In standing uncompromisingly against ancestor worship the Lord’s church is unique and this causes Christians to be persecuted by their families. Almost every African Christian can tell stories about such persecution. A number of young people here have been driven from home because they stopped worshiping the ancestors. Their courage and devotion to the Lord is an inspiration.

In thinking of the influential religions of the world, do not underestimate the religion of Africa – the worship of ancestors. Source.

Once again, with any True Biblical knowledge you can see that these Churches are NOT Christian as they Claim to be.