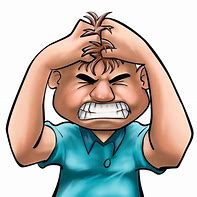 Yea right! Easier said than done! Speaking from personal experience, I can say that anger was one of the biggest strongholds in my life. I would get angry at the drop of a hat, over nothing at all. If someone looked at me wrong, and I did not like them, anger and hatred would well up inside of me. If an unpleasant memory surfaced related to something or someone, anger and hatred would not be far behind. The more I dwelled on it, the more the emotions manifested. Sound familiar? There is not one of us who is living or who has ever lived that has not been angry with someone or something. The extent of that anger is dependent on your personality.

In the world of Psychology, there are four fundamental personality types: Sanguine (optimistic and social), Choleric (short-tempered or irritable), Melancholic (analytical and quiet), and Phlegmatic (relaxed and peaceful). Most of us are a mixture of the types. Please note that these are associated with the 4 elements that Witchcraft holds in high regard. Air, Earth, Wind and Fire. No, not the music group from the 70’s, but the same beliefs their music presented. That is what Psychology is….Witchcraft!

Sanguine
The sanguine temperament is traditionally associated with air. People with this temperament tend to be lively, sociable, carefree, talkative, and pleasure-seeking. They may be warm-hearted and optimistic. They can make new friends easily, be imaginative and artistic, and often have many ideas. They can be flighty and changeable; thus sanguine personalities may struggle with following tasks all the way through and be chronically late or forgetful.

Choleric
The choleric temperament is traditionally associated with fire. People with this temperament tend to be egocentric and extroverted. They may be excitable, impulsive, and restless, with reserves of aggression, energy, and/or passion, and try to instill that in others. They tend to be task-oriented people and are focused on getting a job done efficiently; their motto is usually “do it now.” They can be ambitious, strong-willed and like to be in charge. They can show leadership, are good at planning, and are often practical and solution-oriented. They appreciate receiving respect and esteem for their work.

Melancholic
The melancholic temperament is traditionally associated with the element of earth. People with this temperament may appear serious, introverted, cautious or even suspicious. They can become preoccupied with the tragedy and cruelty in the world and are susceptible to depression and moodiness. They may be focused and conscientious. They often prefer to do things themselves, both to meet their own standards and because they are not inherently sociable.

Phlegmatic
The phlegmatic temperament is traditionally associated with water. People with this temperament may be inward and private, thoughtful, reasonable, calm, patient, caring, and tolerant. They tend to have a rich inner life, seek a quiet, peaceful atmosphere, and be content with themselves. They tend to be steadfast, consistent in their habits, and thus steady and faithful friends. People of this temperament may appear somewhat ponderous or clumsy. Their speech tends to be slow or appear hesitant. Source Wikipedia

If you’re easy going, Sanguine, Melancholic, and especially Phlegmatic, then it probably takes quite a bit to spark the fire, to get you angry. I have found that most fit into these types. If you’re like I WAS, Choleric and a bit of Melancholic, then it takes very little to set you off, especially if you’re consuming alcohol! I believe there is a Spirit, a demonic influence if you will, behind each of these personalities.

That may be the reason Paul says in Ephesians 4: 27 ” Neither give place to the devil.” and why James says in his Epistle James 4:7-8 “Submit yourselves therefore to God. Resist the devil, and he will flee from you. 8 Draw nigh to God, and he will draw nigh to you. Cleanse your hands, ye sinners; and purify your hearts, ye double minded.”

What is double minded?
In a visual connotation, it would be like Jekyll and Hyde. If you are not familiar with the story of Jekyll and Hyde, there is no time here, to explain. Follow the link. One minute the person is normal, (normal for that person) and the next minute a raving lunatic! I have been there and done that! That is demon possession or “double mindedness”. To identify this behavior in someone, listen to their voice and look into their eyes, as you begin to notice the change. If their eyes appear to glass over, start praying because you are witnessing the manifestation of a spirit. This will need to be dealt with properly!

The term double-minded comes from the Greek word dipsuchos, meaning “a person with two minds or souls.” It’s interesting that this word appears only in the book of James (James 1:8; 4:8). Bible scholars conclude that James might have coined this word. To grasp the full meaning of this word, it is best to understand how it is used within its context.

James writes of the doubting person that he is “like a wave of the sea, blown and tossed by the wind. That man should not think he will receive anything from the Lord; he is a double-minded man, unstable in all he does” (James 1:6–8). A doubter is a double-minded person. Jesus had in mind such a person when He spoke of the one who tries to serve two masters (Matthew 6:24). As such, he is “unstable,” which comes from a Greek word meaning “unsteady, wavering, in both his character and feelings.”

A double-minded person is restless and confused in his thoughts, his actions, and his behavior. Such a person is always in conflict with himself. One torn by such inner conflict can never lean with confidence on God and His gracious promises. Correspondingly, the term unstable is analogous to a drunken man unable to walk a straight line, swaying one way, then another. He has no defined direction and as a result doesn’t get anywhere. Such a person is “unstable in all he does.”

Those who are double-minded do not have the faith spoken of in Hebrews 11:1, 3: “Now faith is being sure of what we hope for and certain of what we do not see. . . . By faith we understand that the universe was formed at God’s command, so that what is seen was not made out of what was visible.” We cannot be both “certain” and doubting, as is the double-minded person. One part of his mind is sure of something, while the other part doubts. It brings to mind the “pushmi-pullyu” of the Dr. Doolittle stories, an animal with a head at either end of its body and which was constantly trying to walk in two directions at once. Such is the double-minded man.

God will not grant His blessings upon those who are double-minded. As Jesus pointedly declared, “No one can serve two masters. Either he will hate the one and love the other, or he will be devoted to the one and despise the other” (Matthew 6:24). God and the things of this world are of such opposite natures that it is impossible to love either one completely without hating the other. Those who try to love both will become unstable in all their ways. God is a jealous God (Exodus 34:14) and will not accept a service that is divided with Satan. Source: Got Questions

Attending court ordered anger-management classes, which people are often forced to endure, will not resolve your anger problem. Nor will faithful attendance of AA sessions cure your drinking problem! The only way to be free from these torments to be truly delivered by the power of God. No 12 step program, no 28 days of this or that, no 7, 21 or 40 day fast, not even quoting scripture over and over will deliver you. These issues have a spiritual basis. You must know where and how Satan was defeated.

Paul says in Colossians 2:12-15 “Buried with him (Jesus) in baptism, (not water baptism as some teach) wherein also ye are risen with him through the faith of the operation of God, who hath raised him from the dead. 13 And you, being dead in your sins and the uncircumcision of your flesh, hath he quickened together with him, having forgiven you all trespasses; 14 Blotting out the handwriting of ordinances that was against us, which was contrary to us, and took it out of the way, nailing it to his cross; (now here is the key verse I want you to see) 15 And having spoiled principalities and powers, he made a shew of them openly, triumphing over them in it.”

This is how you rid yourself of anger or any other stronghold in your life. In part two you can either accept the cure for anger or reject it. …the Choice is yours!