My Sin Nature: The Beast Within

“Don’t make me Angry. You wouldn’t like me when I’m Angry”!!

Matthew 10:16 “Behold, I send you forth as sheep in the midst of wolves: be ye therefore wise as serpents, and harmless as doves.”

But beware “WOLVES”, the “Serpent” may just coil and strike without notice!! 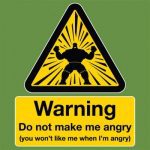 You will see where I am going with this warning, so read the whole text and listen to the video series at the conclusion.

There will very soon come a time when people will have to stand and literally fight off the demon possessed. We are seeing a prelude to the tribulation with the manifestation of these Communist/Socialist Democrats and their kinfolk the Progressives.

In the 7 year tribulation period, I believe true Christians will endure the majority of it just before Jesus’ second coming. I won’t get into the rapture debate because it does not matter. What matters is this. Are you Born Again and is your name written in the Lamb’s Book of Life?  If those two things are a 100% foregone conclusion, then nothing else matters!

There are some of you clowns out there that think True Christians are a pushover and pacifists. Some are, but others like me are NOT! Many clowns try and use their mentor Saul Alinsky’s rule #4. “Make the enemy live up to its own book of rules.“ If the rule is that every letter gets a reply, send 30,000 letters. You can kill them with this because no one can possibly obey all of their own rules.”

Well scooter, that boat don’t float around this here neck of the woods! Let me give you Jon’s 4 rules, and they are in this order.

Rule #1 – Jon IS the Boss!
Rule #2 – Jon IS always Right!
Rule #3 – IF, and the key word being IF, Jon should by happenstance be slightly wrong, Refer back to rules one and two!!!
Rule #4 – If you can’t abide by the above rules, get the hell away from Jon cause Jon will not listen to your crap!

I follow the words of Jesus in  Matthew 10:14 “And whosoever shall not receive you, nor hear your words, when ye depart out of that house or city, shake off the dust of your feet.”

Everyone who was EVER born has a Sin Nature. The Sin Nature is simply this — you have a proclivity to naturally commit sin due to the fall of Adam and Eve in the Garden of Eden. Some of us, have let’s say, a more violent Sin Nature than others. I was/am one of those. I would fight you just for looking at me the wrong way, and when I was drinking, well Katy bar the doors. It was not pretty.

I guess that is why after I was Born Again and the Sin Nature was put to sleep, the movie Sergeant York became my all time favorite movie. If you have not seen it, I encourage you to go watch it. Now I was never in the armed services, but I was a drunken hell-raiser just like Alvin C York, that is until Jesus came into my life!!!  Today I am peaceful and try to keep the peace the very best I can.

Romans 6:6 “Knowing this, that our old man is crucified with him, that the body of sin might be destroyed, that henceforth we should not serve sin.”

The Sin Nature lays dormant in most Christians who know how to keep it at bay. Unless you know how to do that, the Sin Nature will keep you in bondage to Sin. You may have accepted Jesus as your Lord and Savior, were good for a period of time, then slowly returned to your old ways. Maybe drinking, drugging, smoking, lust, whoring or any of the other multitudes of issues. Maybe some of those issues never did stop. That is the Sin Nature not being totally subdued due to the wrong focus on what and who saved you. Again, I will put the Sin Nature series at the bottom and you can learn the solution there.

Now, have you ever had something trigger you and you went off like a double barrel shotgun?  I have and surely will again! Then, when you came back to your right mind, you wondered what made me do that? Yea you guessed it. That was the Sin Nature, the Old Man or Woman in you that was suddenly resuscitated, brought back to life that pushed the Divine Nature out of the way. There is NO WAY to rid yourself of it while in this flesh, your psychical body. Again, if you pay close attention you will learn that in the video series.

Now on to the warning about me and MY SIN NATURE.

“Don’t make me Angry. You wouldn’t like me when I’m Angry”!!

Proverbs 16:32 “He that is slow to anger is better than the mighty; and he that ruleth his spirit than he that taketh a city.”

If you are older having watched much TV, I am sure you remember that line from the Incredible Hulk. David Banner said that to the Hounding reporter who was out to get the Hulk.

If you also remember David Banner was a very peaceful man who would not harm a fly… until someone or something provoked him to wrath! That beast within him only surfaced when under great duress and there was nothing David Banner could do to stop it!

Those who knew me in my teen years through my early thirties can vouch that I was like ole David Banner and when drinking, the wrath could not be subdued. BTW, I handed that down to one of my daughters!

Today it will take a lot for MY OLD MAN to resurface, and I assure you it can and will if triggered! What is the trigger you ask? Well mess with or hurt one of my Children or Grand Children and you will find out.

I let people get away with a lot these days but I assure you in the coming days there will be those who will meet the Old Jon if they push the right buttons!!

So as David Banner said “Don’t make me Angry. You wouldn’t like me when I’m Angry”

Here is part one of the Sin Nature Series. In the description is the links to the other 3 parts