The shadowy “research” firm that commissioned a dossier on President Donald Trump is the same firm hired by Planned Parenthood to create the narrative that the videos exposing the abortion business’s alleged profiteering from the sales of aborted baby parts were “deceptively edited.” 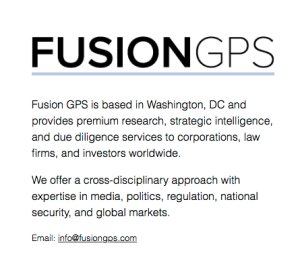 In the summer of 2015, Center for Medical Progress (CMP) began releasing its undercover videos exposing alleged profiteering on the part of Planned Parenthood and its partners in the biomedical fetal tissue procurement industry. The shocking videos forced America’s largest abortion provider into rapid defense mode, and smearing undercover journalist David Daleiden and his group became a top priority of Planned Parenthood.

The group hired Fusion GPS to perform a forensic evaluation on CMP’s videos, the results of which were reported at Politico in August of 2015 with the headline, “Report for Planned Parenthood Finds Sting Videos Manipulated.”

A report commissioned by Planned Parenthood has found that the sting videos targeting its tissue donation practices contain intentionally deceptive edits and inaccurately transcribed conversations and are missing footage. But there is no evidence that the anti-abortion group behind the attack made up dialogue.

However, Politico also reported on the bias of the company: “The report by research firm Fusion GPS attempts to undermine the videos’ political, legal and journalistic value.”

But the firm also wrote that it is impossible to characterize the extent to which the edits and cuts distort the meaning of the conversations depicted and that there was no “widespread evidence of substantive video manipulation.”

The Wall Street Journal’s editorial board wrote about Fusion GPS in May of 2012, and the work of Kimberly Strassel in uncovering the Obama campaign’s smears of then-GOP nominee Mitt Romney:

As Ms. Strassel has reported in recent columns, Idaho businessman Frank VanderSloot has become the target of a smear campaign since it was disclosed earlier this year that he had donated $1 million to a super PAC supporting Mr. Romney. President Obama’s campaign website teed him up in April as one of eight “less than reputable” Romney donors and a “bitter foe of the gay rights movement.” One sin: His wife donated to an anti-gay-marriage campaign, of the kind that have passed in 30 or so states.

Now we learn that little more than a week after that Presidential posting, a former Democratic Senate staffer called the courthouse in Mr. VanderSloot’s home town of Idaho Falls seeking his divorce records. Ms. Strassel traced the operative, Michael Wolf, to a Washington, D.C. outfit called Fusion GPS that says it is “a commercial research firm.”

Fusion GPS is run by a former Wall Street Journal reporter, Glenn Simpson, who wouldn’t say who is paying him for this high-minded slumming but said in an email that Mr. VanderSloot was a “legitimate” target because of “his record on gay issues.”

Though Planned Parenthood has consistently denied any wrongdoing in its sale of body parts, the abortion business also released a statement in October of 2015, announcing it would no longer accept payments for aborted fetal tissue. The organization and its leftwing media and political supporters continue to this day to insist the videos, produced by CMP, were “deceptively edited.”

Another analysis of the videos was then conducted by Coalfire, a third-party forensics company hired by pro-life Alliance Defending Freedom. This second analysis found that the videos were “not manipulated” and that they are “authentic.”