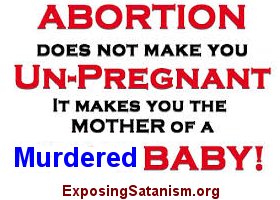 Brittany Slaughter – As if television couldn’t get any more vile, in September HBO will be releasing a new movie titled, “Unpregnant.” The plot of the movie is an underage girl finds out she’s pregnant but can’t get an abortion in her state of Missouri without her parents’ permission so she and her best friend take a road trip to New Mexico to get the abortion there.

In the commercial, her parents are even referred to as Jesus freaks.

So many thoughts are going through my mind right now- none of them good. “When life gets off track, forge your own track” flashes across the screen at one point during the ad. But what they really mean is when you’re irresponsible and get faced with the consequences of your actions, just get rid of the problem.

Even if you have to lie to your parents, boyfriend, and friends and run away to get a dangerous procedure that kills an unborn life and ruins yours.

This movie is an incredibly dangerous work of filth encouraging young women that they can do whatever they want and ignore the consequences. Is this movie going to have a sequel that shows the problems she faces after the abortion?

Maybe I’ll pitch it to HBO: “Unpregnant 2: The side effects.” It’ll follow the underage young lady who has just had an abortion and is now suicidal, sick from the intense procedure and has lost any confidence she once had. She barely sleeps from the nightmares and faces immense guilt every day from murdering the child she helped create. Her relationship with her parents is now incredibly strained, her boyfriend broke up with her for not including him in the decision because as she says in the first commercial “It’s my body, my choice.” She “solved” one “problem,” but it created numerous others. Her life is now miserable.

For some reason, I don’t think the folks at HBO would be a fan.

Sarcasm aside, everything that I mentioned for the second film is true. All of the side effects, the emotional trauma, it is very real. What HBO, Planned Parenthood, and the radical feminism movement won’t tell you is how dangerous abortions are- whether they’re under the table or done in a clinic.

Think about the emotional trauma women go through when they have a miscarriage. They are devastated, hurt, saddened, and many face depression. That’s from the pain of losing a child unwillingly- doing what you can to have a healthy pregnancy then losing the child you were excited to have.

So think with me for a moment, about a woman who finds out she’s pregnant, doesn’t want the child, then decides to just have it removed. Well, the problem (one of many, really) is that it isn’t so simple. Depending on how far along she is, she’ll either take a pill and bleed the child out of her body- facing pain and trauma. Or, she can go to the clinic and have it surgically removed. Possible options for this include sucking the child’s body parts off of the child in the womb then vacuuming them out of her body or sending a knife or scissors into her body and hacking the child to pieces before removing the body parts.

It seriously breaks my heart so much just writing that. I’ve seen videos of abortions taking place. When the surgical instruments enter the womb, the child, sensing that they are in danger, tries to get away from the instruments. You aren’t human if you watch something like that and don’t cry. And you can’t watch something like that and try to argue against it with science.

I had the privilege of seeing the premiere of the pro-life movie “Unplanned.” It’s rated R because it shows abortions taking place and is incredibly transparent about the physical and mental trauma faced. It’s a true story about a former Planned Parenthood director who finally realized what she was doing and now fights to save babies from being murdered. When I sat in that room watching the premiere, I cried my eyes out- and I wasn’t the only one. So many people in that room were drying their eyes and couldn’t believe what they had just seen.

This new movie “Unpregnant” isn’t going to show you the blood, the depression, and the pain that women who have abortions actually face. They’ll just show you a quick, quiet procedure to make you think it’s okay and no harm is done.

They are lying to your face. HBO should be ashamed of themselves for pushing this “girls road trip” movie (that’s how it’s marketed). It sends a dangerous message to young women that they can do whatever they want with their body and if something happens to go wrong, they can just take care of it quickly and easily.

Ladies, it’s not. Planned Parenthood knows it. HBO knows it. And now you know it. There are so many more options if you are faced with a similar situation. Reach out to your local pregnancy center for help. There are ladies there ready to love and take care of you and your child.

HBO is setting out to destroy the lives of millions of young girls in the name of choice.

It isn’t a fair choice if you don’t know the risks. Source

Brittany Slaughter is an opinion writer for DavidHarrisJr.com. Her work can be found in The Washington Examiner, Campus Reform, The College Fix, New Right Network, and The Hill. She is published in the book She’s Conservative- Stories of Trials and Triumphs on America’s College Campuses. She is a journalist dedicated to standing up for the truth, even when it is unpopular. Follow her on Twitter and Instagram @BSlaughterReal.