NO…, Absolutely NOT!!! They are man-made rules and regulations and are NOT Biblical, nor do they come from God!

If they were Biblical and come from GOD, the various denominations and supposed Christian Religions should practice them the same way. But alas, they are NOT! Adhering to Ordinances and Sacraments have NOTHING to do with the True Gospel of Jesus Christ! 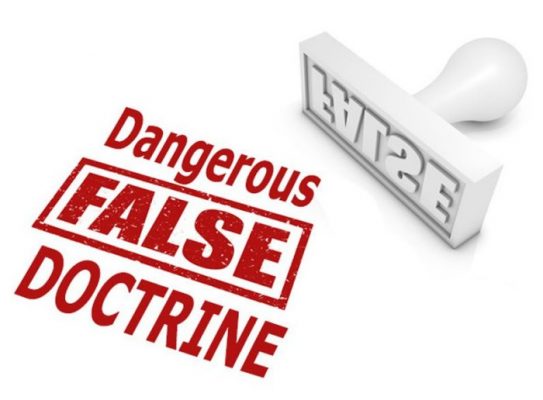 A sacrament is a Christian rite recognized as of particular importance and significance. There are various views on the existence and meaning of such rites. Many Religious People consider the sacraments to be a visible symbol of the reality of God, as well as a channel for God’s grace. Many denominations, including the Catholic, Anglican, Lutheran, Methodist, and Reformed, hold to the definition of sacrament formulated by Augustine of Hippo: an outward sign of an inward grace, that has been instituted by Jesus Christ. Sacraments signify God’s grace in a way that is outwardly observable to the participant.

The Catholic Church and the Old Catholic Church recognize seven sacraments: Baptism, Reconciliation (Penance or Confession), Eucharist (or Holy Communion), Confirmation, Marriage (Matrimony), Holy Orders, and Anointing of the Sick (Extreme Unction). The Eastern Orthodox Church and Oriental Orthodox Church also believe that there are seven major sacraments, but apply the corresponding Greek word, μυστήριον (mysterion), also to rites that in the Western tradition are called sacramentals and to other realities, such as the Church itself. Many Protestant denominations, such as those within the Reformed tradition, identify two sacraments instituted by Christ, the Eucharist (or Holy Communion) and Baptism. The Lutheran sacraments include these two, often adding Confession (and Absolution) as a third sacrament. Anglican and Methodist teaching is that “there are two Sacraments ordained of Christ our Lord in the Gospel, that is to say, Baptism and the Supper of the Lord,” and that “those five commonly called Sacraments, that is to say, Confirmation, Penance, Orders, Matrimony, and Extreme Unction, are not to be counted for Sacraments of the Gospel.”

Some traditions do not observe any of the rites, or hold that they are simply reminders or commendable practices that do not impart actual grace—not sacraments but “ordinances” pertaining to certain aspects of the Christian faith. Source: Wikipedia

They have NOTHING whatsoever to do with Salvation!

Rastafarianism Pot Church: Where Marijuana is the Sacrament!

Got Questions – Roman Catholicism, Eastern Orthodoxy, and a few Protestant denominations use the term sacrament to refer to a rite through which God’s grace is conveyed to an individual. Many evangelical churches prefer the word ordinance, which can be defined as a “God-ordained ceremony.”

A sacrament is often thought of as being a means of God’s grace—as a worshiper performs a certain religious rite, he or she receives divine blessing, either for salvation or for sanctification. An ordinance is usually not considered a conduit of grace but simply a practice commanded to be performed by the Lord. In other words, a sacrament, at some level, involves a supernatural work of God. An ordinance is simply an act of man in obedience to God.

Complicating the issue somewhat is the fact that some churches do see the ordinances as means of grace; other churches consider the sacraments as symbols of spiritual reality and not the reality itself. In those cases, the words ordinance and sacrament are virtually synonymous.

The Roman Catholic Church teaches there are seven sacraments: baptism, confirmation, holy communion, confession, marriage, holy orders, and the anointing of the sick. According to the Catholic Church, these sacraments “are efficacious signs of grace, instituted by Christ and entrusted to the Church, by which divine life is dispensed to us. The visible rites by which the sacraments are celebrated signify and make present the graces proper to each sacrament” (The Catechism of the Catholic Church, 2nd edition, p. 293). Also, “The Church affirms that for believers the sacraments of the New Covenant are necessary for salvation” (Ibid., p. 292). This teaching reveals a works-based system of salvation and a sacerdotal approach to worship.

The Bible, in contrast, tells us that grace is not given through outward symbols, and no ritual is “necessary for salvation.” Grace is the blessing of God, freely given to the undeserving. “But when the kindness and the love of God our Savior toward man appeared, not by works of righteousness which we have done, but according to His mercy He saved us, through the washing of regeneration and renewing of the Holy Spirit, whom He poured out on us abundantly through Jesus Christ our Savior, that having been justified by His grace we should become heirs according to the hope of eternal life” (Titus 3:4–7).

Protestants and evangelicals reject the notion that sacraments can offer salvation. Rather, most see them as signs and signifiers (and sometimes seals) of grace already received. To help avoid communicating the idea that their religious activities are channels of grace, most evangelicals prefer to call them “ordinances.” They see the ordinances as symbolic reenactments of the gospel message. Rather than being requirements for salvation, ordinances are visual aids to help us better understand and appreciate what Jesus Christ accomplished for us in His redemptive work, and they are testimonies that we indeed believe in Christ. Ordinances are determined by three factors: they were instituted by Christ, they were taught by the apostles, and they were practiced by the early church. Baptism and communion (or the Lord’s table) are the two rites that most evangelicals consider ordinances, and neither of them is a requirement for salvation. Scriptural support for baptism is found in Matthew 28:18–20, and support for communion in Luke 22:19. Source: Got Questions