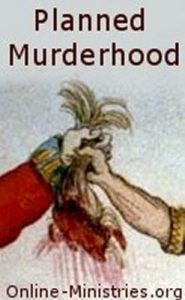 In 2015, David Daleiden shocked America’s conscience by releasing a slew of videos showing abortionists at Planned Parenthood affiliates admitting that they sold the body parts of aborted babies, often to medical research establishments. Planned Parenthood and its allies have dragged Daleiden and his organization, the Center for Medical Progress (CMP), through the courts. California Attorney General Xavier Becerra (following the lead of Kamala Harris) has brought 15 felony counts against Daleiden for his undercover journalism, and Planned Parenthood launched a $7 million, 14-count racketeering lawsuit against Daleiden and his allies.

Last year, Daleiden told reporters to expect “a solid dozen more videos” revealing some of the “most damning” claims against Planned Parenthood and other abortion clinics — if a judge lifted a gag order. It seems the selling of baby scalps might be among those previously unreported bombshells.

Last Thursday, CMP board member Albin Rhomberg testified about how Daleiden and his allies traced the sale of baby body parts from abortion clinics to medical researchers.

Catherine Lynne Short, a lawyer with the Life Legal Defense Foundation, asked Rhomberg if he received “some tip from sidewalk counselors — who noticed some unusual activity that might relate to fetal tissue procurement.”

The CMP board member affirmed that he did receive such a tip. Pro-life sidewalk counselors noticed “a new phenomenon” outside an abortion clinic. “The usual morning ritual of, you know, the staff arriving, and then later on the — the abortionists arriving. Then in midmorning, they would see a new group of people would come. Sometimes one or two or three would come in mid-morning. And they had containers. Sometimes they had bags of ice. They had other tools and equipment.”

Rhomberg testified that he had already heard rumors “that there was a company there, it

20 was called ABR [Advanced Bioscience Resources], that was — there were these rumors that they were collecting the bodies for sale or for distribution in some way.”

“In the afternoon, at a regular-appointed time, a FedEx truck would come and would remove various numbers of — the special refrigerated gel-pack containers would be taken out, and it was — they came out of the door of the clinic, and went into the FedEx truck,” Rhomberg said. “So it was pretty apparent to anybody that this particular place was harvesting — whatever word you want to use — was trafficking in the baby parts.”

“In some cases, the people noticed that the parts went out before the mother went out. She would come — times, come staggering out later, typically throwing up in the bushes and being helped out of the place, after the baby parts had already gone into the FedEx truck,” he added.

Short asked whether he discovered where the packages were heading.

“Yes. Yes,” Rhomberg answered. Since the building had a public lobby, “you could see the FedEx driver come with his little trolley or her little trolley, and comes out of the door of the abortion facility, and takes them out and puts them in the truck.”

Then he described the other end of the system. “You can see there’s actually a federal agency which has to do with biologics for medical research. And you can look in the literature, and you can see various researchers give credits to where they got the fetal parts that they used in their research. So you kind of connect the two ends.”

Then he dropped the bombshell about scalping babies.

“And we realized that one, for example, was a research being done on baldness. That could be just vanity. On the other hand, we do know that patients receiving therapy — there’s many reasons for baldness. And they were attempting — they were using fetal — they were scalping the babies and taking their scalps and grafting them on to immune-suppressed mice, and then using various pharmaceuticals on these humanized mice to test the effect upon preventing or, I suppose you might say, treating baldness,” Rhomberg said (emphasis added).

The process of collecting scalps has an ugly history in Africa, Asia, Europe, and the Americas. The grotesque tradition of removing the top of the heads of dead enemies developed independently in various cultures around the world. The fact of gathering such gruesome trophies was considered an act of barbarism, humiliation, and violence.

Naturally, the researchers who were allegedly scalping the babies in this case were not collecting trophies. But last month, investigators found the remains of more than 2,000 aborted babies seemingly kept as trophies by abortionist Ulrick Klopfer.

Arguments for abortion necessarily involve the dehumanization of unborn babies. This extends not only to the justification for killing them but also to how people treat their dead bodies. There is something undeniably grotesque about scalping the babies, even if the medical research is justifiable.