Psalms 32:9 “Be ye not as the horse, or as the mule, which have no understanding: whose mouth must be held in with bit and bridle, lest they come near unto thee.” 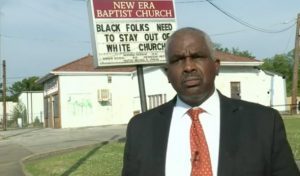 Christian Post – A controversial longtime Alabama pastor, the Rev. Michael R. Jordan, of New Era Baptist Church in Birmingham, slammed the Church of the Highlands, the state’s largest church, on Thursday as racist and “hypocritical” while alleging that their motives behind a planned church plant in the city to help fight crime are not “pure.”

“Whites left the inner city. Whites carried their churches with them, they moved to the suburbs. White folk have proved they don’t want to live next door to us, or be our neighbors, or worship with us,” Jordan told WVTM 13. “Now they want to plant a white church in a black neighborhood under the umbrella of supposedly to fight crime? The real reason Church of the Highlands wants to put a white church in a black neighborhood is they have too many black folks at their main campus and they want them to leave and come to a church in their inner city.”

On April 29, Chris Hodges, founder and leader of Church of the Highlands, which is one of the largest churches in America, announced a new innovative church plant to be launched this fall in one of Birmingham’s most violent neighborhoods.

Hodges, who explained that he had consulted with city officials about the church’s involvement in Birmingham, tapped the Rev. Mayo Sowell, a black former NFL player-turned-church leader to be the campus pastor for the new branch. Sowell, who was signed with the Buffalo Bills, turned to a life of crime after he was cut from the team and was sentenced to 50 months in prison for intent to distribute cocaine.

“I have selected the Right Reverend Mayo Sowell to be the leader over there. It is gonna be awesome and we’re gonna reach the drug dealers and we’ll get the crime to stop. Come on everybody, we’re gonna be the local church,” Hodges said to cheers.

Jordan said that if Church of the Highlands wants to minister to their community, they shouldn’t be afraid to be neighbors.

“I’m totally against it because their reason is not pure. It’s hypocritical,” he said. “If you don’t want to be our neighbors, if you don’t want to live next door to black African-Americans, how can you put a white church over here to help fight crime? As soon as you finish worshiping, you’re going to go back to the suburbs like you’ve done for 30 years.”

When challenged by the fact that the pastor for the Church of the Highlands plant is black, Jordan dismissed him as a “token” who will have no autonomy.

“We’ve heard about the African-American pastor but he’ll just be a token. The white administrators of Church of the Highlands [will] boss him and control his sermons,” he said.

“I want to say something to every African American that attends a white church. Leave now. Come to your mainstream black church. Your focus is different, our cultures are different. Again, the white institutional church is under watch because they elected a promiscuous, racist president that’s building walls,” he said. Source: Christian Post

Yea, Come to a Racist Black Church like his or go to a Church where the Pastor is a Leader of the NAACP and a Proven LIAR! Lying Black Reverend claimed officer accused him of possessing drugs, driving stolen vehicle

Acts 17:26 “And hath made of one blood all nations of men for to dwell on all the face of the earth, and hath determined the times before appointed, and the bounds of their habitation;”

If you Identify as a Christian, there should be NO SUCH THING as “White church”, “Black church”, “Hispanic church”, “ Catholic church”, “ Mormon church”, “Baptist church”, “Pentecostal church” etc., only the Church of the Lord Jesus Christ. Anyone who thinks, preaches, or teaches otherwise is Racist !!!

Don’t be dragged to HELL by anti-Christ’s like this fool!