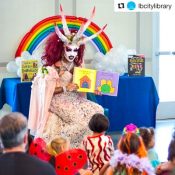 Previously Charged with Sexual Assault of a Child Under the Age of 14 Gateway Pundit – A Houston public library issued an apology after it was discovered one of their drag queen storytime readers was previously charged with child sexual assault. Albert Alfonso Garza, 32, was last seen dressed in drag reading to young children at the Montrose Library in … Click Here to Read More