“If Jesus Was Here I’d Spear Him! I Liked It The First Time And I’d Do It Again!”

Got news for you scooter, you WILL NOT do it again! 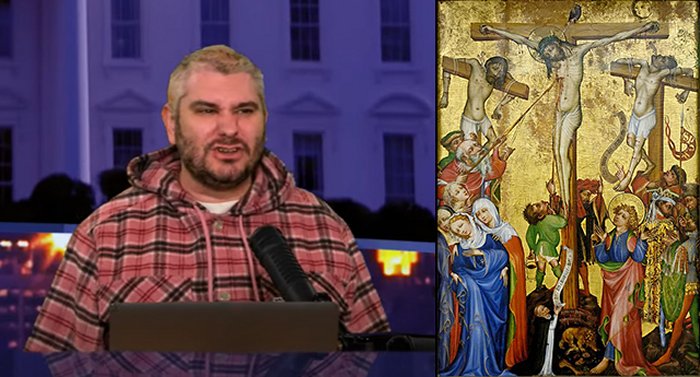 YouTuber Ethan Klein told his nearly 3 million subscribers he wants to get together with his “Jewish brothers” and murder Jesus Christ “again” because he “liked it the first time” and would love to “do it again!”

Matthew 27:25 “Then answered all the people, and said, His blood be on us, and on our children.”

It certainly looks like those words spoken by the Jews were handed down through the Generations!!

This is the mentality of a Disciple of Lucifer!

Revelation 2:9 “I know thy works, and tribulation, and poverty, (but thou art rich) and I know the blasphemy of them which say they are Jews, and are not, but are the synagogue of Satan.”

He, and those like him, are possessed with the spirit of anti-Christ!

Chris Menahan | Information Liberation – After watching a clip of Christian nationalist Nick Fuentes saying the “real Holocaust” was “Jesus Christ being crucified,” Klein claimed it’s “anti-Semitic propaganda” that Jews killed Jesus and added: “Why are you mad at Jews for killing Jesus, he’s God, the motherf**ker is infallible God, like this is all– why you mad at me bro? This is what he wanted.”

“I’d do it again!” Klein shouted during his show on Thursday. “Give me the spear b*tch! I’ll f**ing do it again!”

“If Jesus was here on a cross, I’d spear him!” he continued.

His “Jewish brothers” to Spear Christ our Lord again, he “liked it the first time”

He’s previously called for The Vatican to be nuked pic.twitter.com/Rt1D2Ghahu

“That’d be funny if he got banned [from YouTube] for that,” his co-host Hasan Piker said.

“No, I’m not gonna get in trouble for that,” Klein said confidently.

“Give me the hammer and the spikes, I’m putting his ass up there!” Klein shouted again. “I’ll do it again, I liked it the first time and I’ll do it again, Nick [Fuentes]! I’m getting on a call with all my Jewish brothers and sisters!”

“You know what I’m planning this Christmas? A mock execution of Jesus Christ! Dedicated to Nick Fuentes!” he said.

You can watch the full segment and the full show, which was sponsored by DoorDash, below:

Evidently, YouTube CEO Susan Wojcicki is fine with hosting this “hate speech” on her platform.