Women on Waves need to have a Millstone hung on their necks, submerged and drowned! 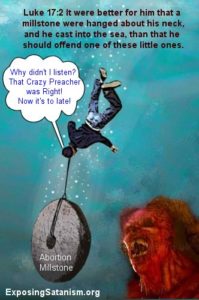 To get around the gambling laws in Texas, a casino boat makes its home in Galveston that takes people on a cruise a little over 12 miles out to international waters. I would not be surprised that one day all the major cruise lines have an abortion deck for legal murder. Lucifer is very cunning because there are lots of Skanky Harlots in Mexico too!

The “Women on Waves” vessel was expelled from near Guatemala in February without carrying out a single pregnancy termination.

It had taken up position off Guerrero state, on Mexico’s Pacific coast.

The “Women on Waves” group said in an online statement that it was offering “free legal medical abortions till 9 weeks of pregnancy” to women who needed them. It said its ship “has all required permits” and would receive women until Sunday.

It noted that Mexico permitted abortions in cases of sexual violence. Abortion is limited in other cases to different degrees across the 31 Mexican states. Read the rest here.