Going the Way of Cain

Jude 1:11 “Woe unto them! (Concerning apostasy and apostates, the Holy Spirit says to them, Woe!) for they have gone in the way of Cain (the type of a religious man who believes in God and religion, but after his own will, and who rejects Redemption by blood), and ran greedily after the error of Balaam for reward (the error of Balaam was that he was blind to the higher morality of the Cross, through which God maintains and enforces the authority and awful sanctions of His Law, so that He can be Just and the Justifier of the believing sinner; he loved the wages of unrighteousness in coveting the gifts of Balak [Num. 22:7, 17, 37; 24:11; II Pet. 2:15]), and perished in the gainsaying of Core (the gainsaying of this man was his rebellion against Aaron as God s appointed Priest; this was, in principle, a denial of the High Priesthood of Christ [Num., Chpt. 16]).”

In the little New Testament Book of Jude, the author spends the majority of his time describing false teachers, both their attitudes and actions. He warns the Believers of the First Century Church to beware of those who meet the descriptions given as they will greatly affect their Faith in a negative way. It seems that Jude had intended on giving a discourse in regard to the wonder and benefits of true Salvation, but as he began to write, the Holy Spirit interrupted his train of thought and sent him down another Path. That new Path was one in which Jude would exhort Believers to “earnestly contend for the Faith.” He is greatly concerned for the welfare of the Saints and wants them to both recognize and remove themselves from any teachers who would fit his stated description.

RECOGNIZING THE WAY OF CAIN 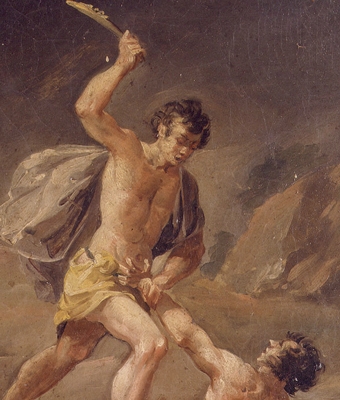 What is the way of Cain? Literally the word “way” is “hodos” in the Greek and means “a road.” However, when it is applied to a person, as it is in this Text, it indicates a commitment to a certain direction, a way of life, a belief system, or an approach to relationship with God. Therefore, Cain s belief system, his approach to relationship with God is what is being discussed.

By searching out the Third and Fourth Chapters of Genesis, we find that God had specifically laid out the means by which man could stay in relationship with Him after the Fall. He promised that the “seed of the woman” (a Redeemer) would come (see Gen. 3:15) and resolve the dilemma created by the First Family s sin. Many scholars believe that at the same time God Himself instituted the idea of blood sacrifice when He clothed Adam and Eve with the skins of slain animals (indicating a blood sacrifice) in Genesis 3:21.

When Chapter 4 opens we find that a sacrificial system, with a specific routine had been given to Adam and Eve and that they had trained their sons, Cain and Able, to participate in the appropriate way in order to maintain a relationship with God. It is very obvious that a blood sacrifice (a Type of Christ s Atoning Work on the Cross) was what they were to participate in, but at a certain point in time, Cain decided that he was going to change the pattern of sacrifice given to a way that pleased him. He would offer to God that which he had produced from the ground. Being a farmer, or one that was “a tiller of the ground,” Cain decided to offer the bloodless sacrifice of the work of his hands. God refused to receive his offering, even as he refuses to accept any way other than the Cross as the means to Salvation or progressive growth. God cannot accept a bloodless sacrifice. Neither can He accept the tawdry work of man s devices as a means of Deliverance from a besetting sin or growth.

The Way of Both Salvation and Sanctification

The Church must remain true to God s Plan regarding both Redemption and growth. There is no other plan outlined in Scripture other than the Plan of Faith and Grace. Man places his Faith in the Finished Work of Christ and receives the Grace of God in order to qualify for the Holy Spirit s Work of Regeneration and inner Sanctification. There is no other way to be Saved. There is no other Biblical way to grow Spiritually. With our Faith properly placed in that which is pleasing to God, the Holy Spirit becomes the Supernatural Sanctifying Agent that equips the Believer to overcome sin and helps us to experience the necessary changes in our heart. No other way will work. No other way is acceptable to God. While most of the Protestant Church still believes (I pray that this is a true statement) in the Cross as the Way of Salvation, they have opted for the ways of man when it comes to the progressive Sanctification of the Believer. No amount of works, Biblical or not, can ever bring the Believer into true Spiritual Growth. If our Faith is not in the Cross as the means by which we are sanctified, we are traveling in the age-old error of Cain. We have rejected God s Plan and like Cain, we have come up with one of our own. As with Cain, God will reject our efforts, no matter how zealous and honest we may be in our attempt to do the right thing. Ours must be the obedience to the Faith which brings the produce of the Spirit. The end result of this way is Holiness and Righteousness. It brings the product of good works. It brings a life changed and the Gospel lived and proclaimed. Faith in any other way other than Faith in the Cross for either Salvation or progressive Sanctification is the way of Cain.

THE PROPER REACTION TO THE WAY OF CAIN

The only proper reaction to those who preach and promote the way of Cain is separation. The Believer must separate from every way or means of Salvation outside of Faith in the Cross. The Believer must separate from every device, pattern, scheme, or routine of man designed to bring about progressive growth, other than Faith in the Cross. A failure to do so will birth the heart of Cain into the heart of the Believer. And like Cain of old, you will find yourself attempting to kill or destroy Abel, whose Faith was in nothing but the blood sacrifice, a Type of the Cross.