Georgia Rep. John Lewis, a leader of civil rights movement, dead at 80  One report states that he was in office for 33 years. 33 an Occult number!

Acts 17:26 “And hath made of one blood all nations of men for to dwell on all the face of the earth, and hath determined the times before appointed, and the bounds of their habitation;” 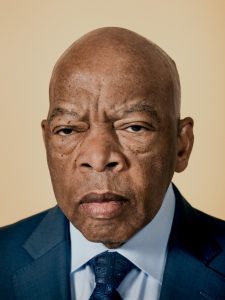 He was educated at the Pike County Training High School, Brundidge, Alabama, and also American Baptist Theological Seminary and at Fisk University, both in Nashville, Tennessee, where he became a leader in the Nashville sit-ins. While a student, he was invited to attend nonviolence workshops held in the basement of Clark Memorial United Methodist Church by the Rev. James Lawson and Rev. Kelly Miller Smith. There he became a dedicated adherent to the discipline and philosophy of nonviolence, which he still practices today. Source Wikipedia

It seems as though all of these Theological Seminary students come out knowing OF God and scripture in their mind, but they DO NOT know God in there heart where people are changed.

There are MANY Judas’ and Jezebel’s in the government as well as the church. Find out who meets the criteria of being one here.

It also seem that these Radical Communist Democrats seem to be birthed out of the Methodist Church. John Lewis attended training sessions in the basement of the Clark Memorial United Methodist Church, who are associated with the Metropolitan African Methodist Episcopal Church, the National Cathedral of African Methodism. See Two parts on this conglomeration of Devils Disciples here:

Here is some info on the Clark Methodist Church:

Clark Memorial United Methodist Church is the oldest black United Methodist Church (UMC) in Nashville, Tennessee. In 1865 the Methodist Episcopal Church sent Bishop Davis W. Clark to Nashville to reorganize the Negro mission at Andrew Chapel, located on Franklin Street in South Nashville. The church’s name was changed to Clark Chapel and would undergo several name changes in keeping with denominational changes and Bishop Clark’s death in 1871. Initially, the church was racially integrated. See more about this Church that John Lewis was associated with here.

It should be noted that Hillary Clinton and Elizabeth Warren subscribe to the Social gospel of Methodism. See info on these 2 Silly Women here.  Hillary Clinton was radicalized in the Methodist Church where her mentor Communist and Luciferian Saul Alinsky was a member. See this UN-disputed TRUTH and FACTS in Hillary’s Witchcraft, Specifically, in part 2.

So is John Lewis a Hero or a Traitor?  Both. He was a moving force in the civil rights movement in the early days. When people get involved in a movement that starts out as a good thing, it will quickly be taken over by the Socialist, Communists as we can clearly see in the Democratic party. It once WAS for the working man but now is nothing more then a den of liars, thieves, baby killers and sexual perverts!

I came across it not more then 1 hour after I published the two parts about the Metropolitan African Methodist Episcopal Church. The timing is not a coincidence, nor are the connections to fake Christianity and Communism!

A lot of people have died in Georgia’s 5th congressional district over the summer. Murders are up 240% in Atlanta in July. The victims include an 80-year-old retired mechanic and an 8-year-old girl. Read the rest here

Just another Filthy Communist Democrat who was worshiped by idiots. Well,  he is BURNING IN HELL right now!