Christmas: Is it Christian or Pagan? – Part 6
The Origin of Santa Claus: The Devil’s Counterfeit

Just out for the 2017 Christmas Season: Santa Claus is now a Queer Black Man with a White Husband! 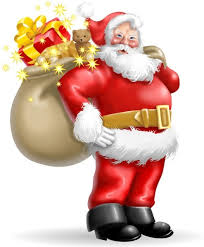 Santa Claus is a counterfeit of Jesus Christ and is supposedly, a Catholic version of Saint Nicholas. He was a fourth century Roman Catholic bishop and was noted for his good deeds and gift giving, or so the story goes. This tradition (there are many versions of the origins of Santa) first spread throughout Europe, and then found its way to America. God warns us to BEWARE of tradition Colossians 2:8 “Beware lest any man spoil you through philosophy and vain deceit, after the tradition of men, after the rudiments of the world, and not after Christ.” Is it any wonder to find the enemy, the counterfeiter right in the middle of the world’s most celebrated holiday. He surely is laughing HO HO HO

Lucifer’s desire has always been to dethrone God and exalt himself (Isaiah14:12-15). He desires worship (Luke 4:7 and 2nd Thessalonians 2:3-4). Have you ever thought of the comparisons between Jesus and Santa? This is how Satan (santa) robs the Lord Jesus Christ of His glory by spreading the Santa Claus myth.

This reformatted comparison comes from BibleBelievers.com

Santa Claus from a Pagan perspective

The image of Santa is taken from the Celtic image of The God, as well as the Norse image of Odin, as an elderly man with long robes, gray hair and beard, and the wreath adorning his head. The image has regained popularity in recent years as the European “Father Christmas” in many a hobby shop and holiday stores. The image of Santa we know today came mostly from a political cartoonist of the 1880’s named Thomas Nast, who fattened Santa up, give him a pipe, and had little elves running about. An aggressive advertising campaign by the Coca Cola company in the 1930’s ingrained the image into pop culture, and no, Santa was not invented by them either, that is just an urban myth.

One of the real historical person in the Christianized version is St. Nicholas of Myra. According to legend, St. Nicholas would go and give bags of money to the poor on Christmas eve. One story in particular has him helping a poor farmer with three daughters. Since there was no dowry for the girls, no one would marry them and they would likely end up as prostitutes. Hearing of the farmers problems, St Nicholas came by with three bags loaded with coins. The farmer was not in, but a window was open, so he threw them at the fireplace and they landed inside the stockings that were on the hearth to dry. Starting the Holiday stocking traditions that would be incorporated into the Santa story of today. Reindeer also have a special meaning to the Celtics as the stag symbol of the God Cernunnos. Source

St. Nicholas was born in Parara, Turkey in 270 CE and later became Bishop of Myra. He died in 345 CE on December 6th. He was only named a saint in the 19th century. In 1087, a group of sailors who idolized Nicholas moved his bones from Turkey to a sanctuary in Bari, Italy. There Nicholas supplanted a female boon-giving deity called The Grandmother, or Pasqua Epiphania, who used to fill the children’s stockings with her gifts. The Grandmother was ousted from her shrine at Bari, which became the center of the Nicholas cult. Members of this group gave each other gifts during a pageant they conducted annually on the anniversary of Nicholas’ death, December 6.

The Nicholas cult spread north until it was adopted by German and Celtic pagans. These groups worshipped a pantheon led by Woden –their chief god and the father of Thor, Balder, and Tiw. Woden had a long, white beard and rode a horse through the heavens one evening each Autumn. When Nicholas merged with Woden, he shed his Mediterranean appearance, grew a beard, mounted a flying horse, rescheduled his flight for December, and donned heavy winter clothing.

Here is where the Catholic church once again adopted paganism.

In a bid for pagan adherents in Northern Europe, the Catholic Church adopted the Nicholas cult and taught that he did (and they should) distribute gifts on December 25th instead of December 6th.

Dr. Clement Moore, a professor at Union Seminary, read Knickerbocker History, and in 1822 he published a poem based on the character Santa Claus: “Twas the night before Christmas, when all through the house, not a creature was stirring, not even a mouse. The stockings were hung by the chimney with care, in the hope that Saint Nicholas soon would be there…” Moore innovated by portraying a Santa with eight reindeer who descended through chimneys.

The Bavarian illustrator Thomas Nast (he also created the Republican and Democrat logos) almost completed the modern picture of Santa Claus. From 1862 through 1886, based on Moore’s poem, Nast drew more than 2,200 cartoon images of Santa for Harper’s Weekly. Before Nast, Saint Nicholas had been pictured as everything from a stern looking bishop to a gnome-like figure in a frock. Nast also gave Santa a home at the North Pole, his workshop filled with elves, and his list of the good and bad children of the world. All Santa was missing was his red outfit.

In 1931, the Coca Cola Corporation contracted the Swedish commercial artist Haddon Sundblom to create a coke-drinking Santa. Sundblom modeled his Santa on his friend Lou Prentice, chosen for his cheerful, chubby face. The corporation insisted that Santa’s
fur-trimmed suit be bright, Coca Cola red. And Santa was born – a blend of Christian crusader, pagan god, and commercial idol. Source

Santa Claus’s Bones are held and worshiped by Catholics
Former evangelical (apostate) minister and historian William Federer confirms Christmas is an invention of the Catholic Church. I am sure it is not his intent, but he documents the story of how Christmas came to be in his book “There Really Is a Santa Claus: The History of Saint Nicholas & Christmas Holiday Traditions.”

In the article linked below and in his book, he documents after Nicholas died in 343 A.D., his bones were brought to the pope, who built a basilica for his remains, where they are enshrined to this day. “The Christians moved the bones of St. Nicholas from Myra in Asia Minor over to Bari, Italy in the year 1087 [A.D.],” Federer told Cameron, citing that Muslims were seeking to destroy the bones of the “saints.” “And the pope, Pope Urban II, he builds a cathedral.”

He also explained that gift-giving in the tradition of Nicholas, who had been sainted by the Roman Catholics, soon become so popular among Catholics that it seemed to distract from Jesus, so the icon St. Francis of Assissi (after whom the current pope is named) created the creche, also known as the modern nativity scene.

You can read an article entitled Kirk Cameron, Former Evangelical Pastor Take to TBN to Make Case for Santa Claus by Heather Clark Christian News Network December 11, 2014 and if you have any common sense at all, you can deduce that indeed Christmas is derived from the pagan ritual of worshiping dead people and their bones!!

Continued in Part 7 – Santa’s Elves: What exactly are they in reality?