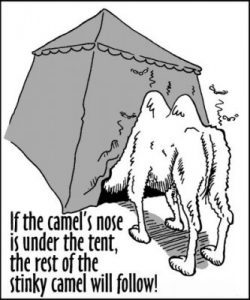 ALL but one of the Ten Commandments still apply. They are the Moral Laws given by God himself. The only one that does not apply is keeping of the SATURDAY Sabbath. The Levitical Law and all of the feast days should NOT be observed by a True Christian. The Levitical Laws are man-made crap!

Matthew 5:17-18 “Think not that I am come to destroy the law, or the prophets: I am not come to destroy, but to fulfil. 18 For verily I say unto you, Till heaven and earth pass, one jot or one tittle shall in no wise pass from the law, till all be fulfilled.”

In a column published by Relevant Magazine, the North Point Community Church pastor argued that the Ten Commandments are “the old covenant” and no longer apply to believers.

“[I]f we’re going to create a monument to stand as a testament to our faith, shouldn’t it at least be a monument of something that actually applies to us?” he posed.

Stanley went on to say that he believed so much of the evils committed by churches over history were connected to them trying to mix aspects of the old covenant with Christianity and that although “Jesus was foreshadowed in the old covenant, he did not come to extend it.” Read the rest here

What does it mean that Jesus fulfilled the law, but did not abolish it?

In Matthew’s record of what is commonly called the Sermon on the Mount, these words of Jesus are recorded: “Do not think that I have come to abolish the Law or the Prophets; I have not come to abolish them but to fulfill them. I tell you the truth, until heaven and earth disappear, not the smallest letter, not the least stroke of a pen, will by any means disappear from the Law until everything is accomplished” (Matthew 5:17-18).

It is frequently argued that if Jesus did not “abolish” the law, then it must still be binding. Accordingly, such components as the Sabbath-day requirement must be operative still, along with perhaps numerous other elements of the Mosaic Law. This assumption is grounded in a misunderstanding of the words and intent of this passage. Christ did not suggest here that the binding nature of the law of Moses would remain forever in effect. Such a view would contradict everything we learn from the balance of the New Testament (Romans 10:4; Galatians 3:23-25; Ephesians 2:15).

Of special significance in this study is the word rendered “abolish.” It translates the Greek term kataluo, literally meaning “to loosen down.” The word is found seventeen times in the New Testament. It is used, for example, of the destruction of the Jewish temple by the Romans (Matthew 26:61; 27:40; Acts 6:14), and of the dissolving of the human body at death (2 Corinthians 5:1). The term can carry the extended meaning of “to overthrow,” i.e., “to render vain, deprive of success.” In classical Greek, it was used in connection with institutions, laws, etc., to convey the idea of “to invalidate.”

It is especially important to note how the word is used in Matthew 5:17. In this context, “abolish” is set in opposition to “fulfill.” Christ came “…not to abolish, but to fulfill.” Jesus did not come to this earth for the purpose of acting as an opponent of the law. His goal was not to prevent its fulfillment. Rather, He revered it, loved it, obeyed it, and brought it to fruition. He fulfilled the law’s prophetic utterances regarding Himself (Luke 24:44). Christ fulfilled the demands of the Mosaic law, which called for perfect obedience under threat of a “curse” (see Galatians 3:10, 13). In this sense, the law’s divine design will ever have an abiding effect. It will always accomplish the purpose for which it was given.

If, however, the law of Moses bears the same relationship to men today, in terms of its binding status, then it was not fulfilled, and Jesus failed at what He came to do. On the other hand, if the Lord did accomplish His goal, then the law was fulfilled, and it is not a binding legal institution today. Further, if the law of Moses was not fulfilled by Christ—and thus remains as a binding legal system for today—then it is not just partially binding. Rather, it is a totally compelling system. Jesus plainly said that not one “jot or tittle” (representative of the smallest markings of the Hebrew script) would pass away until all was fulfilled. Consequently, nothing of the law was to fail until it had completely accomplished its purpose. Jesus fulfilled the law. Jesus fulfilled all of the law. We cannot say that Jesus fulfilled the sacrificial system, but did not fulfill the other aspects of the law. Jesus either fulfilled all of the law, or none of it. What Jesus’ death means for the sacrificial system, it also means for the other aspects of the law. Source: Got Questions

Charles Stanley, Andy’s dad, should get him by the nap of the neck and slap that blasphemous mouth till blood flows!