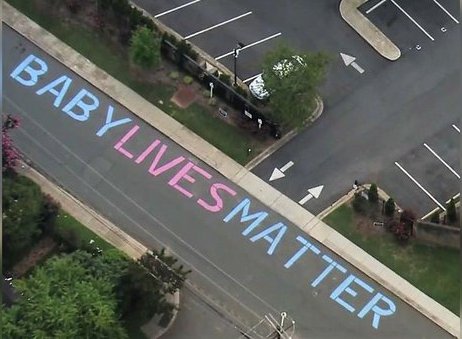 Adan Salazar | News Wars – Police are searching for the pro-life activist, or activists, who painted a “Baby Lives Matter” mural in front of a Planned Parenthood clinic in Charlotte, North Carolina.

According to local CBS affiliate WBTV, the mural, which is being referred to as “vandalism,” was spotted by the news team during an aerial shot Wednesday, after which they alerted authorities.

The vandalism is being investigated by the Charlotte-Mecklenburg Police Department. https://t.co/lIFKhgpdIQ

WBTV’s Sky 3 observed the mural from above. WBTV reached out to the Charlotte-Mecklenburg Police Department to see if there was any response to this mural.

They responded and said on Wednesday, CMPD officers went to South Torrence Street in reference to a call for service regarding vandalism in the street.

Interesting to note that while the mural is similar to ones celebrating “Black Lives Matter” in major Democrat-run cities across the country, the message promoting life is instead being investigated as an act of vandalism.

So it’s vandalism when it doesn’t meet your narrative?

“So it’s vandalism when it doesn’t meet your narrative?” noted one keen Twitter user.

The “Baby Lives Matter” message riffs off the Black Lives Matter mantra to call attention to the millions of babies killed in abortion clinics each year.

In this case, the message takes on special significance as it’s painted outside Planned Parenthood, the abortion provider credited with killing millions of black babies that’s finally having to face the “racist legacy” and “eugenic ideology” of its founder, Margaret Sanger.