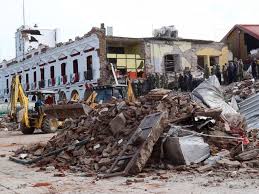 JUCHITAN, Mexico (AP) — Government cargo planes flew in supplies and troops began distributing boxes of food to jittery survivors of an earthquake that destroyed a large part of Juchitan and killed at least 37 people here, even as officials on Sunday raised the nationwide death toll to 90.

Some people continued to sleep outside, fearful of more collapses, as strong aftershocks continued to rattle the town, including a magnitude 5.2 jolt early Sunday. Some prompted rescue workers to pause in their labor.

Local officials said they had counted nearly 800 aftershocks of all sizes since late Thursday’s big quake, and the U.S. Geological Survey counted nearly 60 with a magnitude of 4.5 or greater. Read more here.