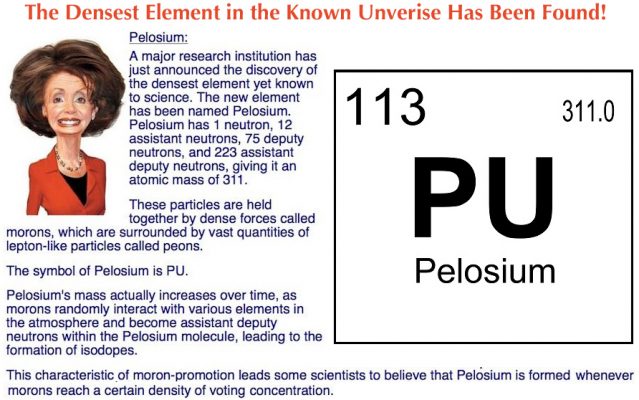 This Wicked Jezebel also says that Democrats do the work of God! Which god is she talking about?

It is reflected in their actions. The saying “Birds of a feather flock together” is for a reason!

House Speaker Nancy Pelosi invited the president of Planned Parenthood Leana Wen and open border zealots such as Angelica Salas of Coalition for Humane Immigrant Rights of Los Angeles, to mention a few.

Pelosi always talks about her Catholic faith, however she chose to invite the Leana Wen, the president of baby butchers inc, also known as Planned Parenthood. Source

In Matthew 6 Jesus talks about the things you treasure and where your heart is, as well as what your eyes are affixed on. The whole of your body, your soul and spirit will follow suit and be drawn to it.

The context is about money and riches, but can also point to other things a person covets and worships. In this case Nasty Nancy’s Treasure is the Murder of Children and Illegal Aliens.

Matthew 6:19-24 “Lay not up for yourselves treasures upon earth, where moth and rust doth corrupt, and where thieves break through and steal: 20 But lay up for yourselves treasures in heaven, where neither moth nor rust doth corrupt, and where thieves do not break through nor steal: 21 For where your treasure is, there will your heart be also. 22 The light of the body is the eye: if therefore thine eye be single, thy whole body shall be full of light. 23 But if thine eye be evil, thy whole body shall be full of darkness. If therefore the light that is in thee be darkness, how great is that darkness! 24 No man can serve two masters: for either he will hate the one, and love the other; or else he will hold to the one, and despise the other. Ye cannot serve God and mammon.”

Nor can you serve Planned Parenthood, Illegal Aliens or any other Demonic agenda the Communist Democrats embrace!!

The Democrat party is officially the party of illegal aliens and baby killers. The list comes from The Gateway Pundit

In yet another example of moral narcissism and the liberal inability to understand conservative positions on faith, House Minority Leader Nancy Pelosi declared that her party, the Democratic Party, does the will of God while Republicans dishonor their Creator.

Of Republicans, the Democrat congresswoman from California declared, “They pray in church on Sunday and they prey on people the rest of the week. And while we’re doing the Lord’s work, ministering to the needs of God’s creation, they are ignoring those needs which is to dishonor the God who made them.” Read more here

So let me get this straight.

“The Pelosi passage is not in the Bible,” Will Kynes, an associate professor of the Hebrew Bible/Old Testament at Whitworth University, told me by email. The closest analog he could find was Proverbs 14:31, which switches the order of the two main ideas and focuses specifically on the poor: “Those who oppress the poor insult their Maker, but those who are kind to the needy honor him.” Greg MaGee, an associate professor of biblical studies at Taylor University, independently suggested the same verse as the closest approximation of the sentiment in Pelosi’s version.

NTEB – Nancy Pelosi addressed a gathering of presidents of Christian colleges this week in Washington, where she thanked the evangelical community for its leadership on immigration and refugee policy reform.

Nancy Pelosi is by her own admission a Catholic, even though she is 100% and adamantly in favor of killing babies through abortion at any stage of the pregnancy or birth process. The Bible declares murder to be wrong in both Testaments and in all dispensations. So you might well imagine that she is quite selective about which quotes from the Bible she likes to use. As it turns out, she is so selective that her favorite Bible quote is not found anywhere in the Bible. She just, well, made it up.

“The trouble with our Liberal friends is not that they’re ignorant; it’s just that they know so much that isn’t so.” Ronald Reagan

Most Liberals hate the Bible, but the ones that are not openly hostile towards it love to misquote it in a vain attempt to prove that Jesus taught some kind of a social justice gospel. Jesus taught no such thing. Jesus teaches us in the Bible that we need to get saved in order to avoid going to Hell. Why don’t Liberals ever quote those verses?

“And if thy hand offend thee, cut it off: it is better for thee to enter into life maimed, than having two hands to go into hell, into the fire that never shall be quenched: Where their worm dieth not, and the fire is not quenched.” Mark 9:43,44 (KJV)

Nancy Pelosi Keeps Quoting Her Favorite Bible Verse. The Mystery: It’s Not Actually in the Bible.

FROM SLATE: To this end, the speaker of the House quoted a favorite bit of biblical wisdom in her opening statement: “To minister to the needs of God’s creation is an act of worship. To ignore those needs is to dishonor the God who made us.”

OK, actually, she said, it might not technically be from the Bible. “I can’t find it in the Bible, but I quote it all the time,” Pelosi said as she introduced the quote. “I keep reading and reading the Bible—I know it’s there someplace. It’s supposed to be in Isaiah. I heard a bishop say, ‘To minister to the needs of God’s creation … ’ ”

To clarify: It is not “there someplace.”

“The Pelosi passage is not in the Bible,” Will Kynes, an associate professor of the Hebrew Bible/Old Testament at Whitworth University, told me by email. The closest analog he could find was Proverbs 14:31, which switches the order of the two main ideas and focuses specifically on the poor: “Those who oppress the poor insult their Maker, but those who are kind to the needy honor him.” Greg MaGee, an associate professor of biblical studies at Taylor University, independently suggested the same verse as the closest approximation of the sentiment in Pelosi’s version.

Pelosi got one thing right: She does in fact “quote it all the time.” The earliest example I found comes from the Congressional Record in 2002, in a speech honoring a prominent Catholic priest in San Francisco who had recently died. “The Bible tells us that to minister to the needs of God’s creation is an act of worship,” she said on the House floor. “To ignore those needs is to dishonor the God who made us.”

Between 2002 and 2018, the quote appears 12 times in the Congressional Record, with Pelosi responsible for all but one of the entries. (The other time, Texas Republican Louie Gohmert was quoting Pelosi.) She has deployed it in speeches to recognize genocide in Darfur (“to ignore God’s creation, which are these children, is to dishonor the God who made them”), to strengthen the Endangered Species Act (“to minister to the needs of God’s creation, and that includes our beautiful environment”), twice to honor Catholic schools (“my Catholic education taught me that to minister to the needs of God’s creation”), and to express condolences after the 2004 tsunami in Southeast Asia (“it is appropriate on many occasions, but I thought of it the minute I saw the tsunami”).

It’s easy to see why the line is useful for a politician.

It suggests that to do any kind of earthly good—“to minister to the needs of God’s creation”—is a holy act. The quote is a dollop of ancient wisdom on top of a dry discussion of policy. It’s the next best thing to the Prophet Isaiah himself appearing on the House floor to, say, oppose a particular iteration of the Federal Agriculture Reform and Risk Management Act of 2013 (“to ignore those needs, as this bill does, is to dishonor the God who made us”).

Nancy Pelosi has faced surprisingly little pushback over the years for her repeated citation of a nonexistent Bible verse. There was a flurry of harrumphing on conservative websites in 2008, after one site called around to some Bible scholars to confirm that the line didn’t come from the Bible. But she kept on using it, and there’s been little objection from the left or the right in the decade since. That may be because of the fact that politicians mangle quotes and their sources constantly. And Pelosi’s hemming and hawing in her speech this week suggests that she’s aware by now that she has it wrong. READ MORE

The Gospel According To Nancy: