HYDERABAD, India (Morning Star News) – A hard-line Hindu has confessed to attempting to murder a pastor in southern India as the Christian leader was praying at night, according to police.

Pastor Madira Koti Reddy, who leads a house church in Rentachintala village, Guntur District in Andhra Pradesh state, on March 29 had gone to his room to study the Bible and pray at about 10 p.m. after eating dinner with his family, his wife told Morning Star News. Madira Shanti said she was in the backyard with their daughter doing dishes at the time.

At about 10:30 p.m., the assailant stealthily entered the house and went to the 55-year-old pastor’s room, where he slashed his arms and head with an axe, she said.

“I heard my husband screaming and ran into the house,” Shanti told Morning Star News.

With just one light bulb on, she couldn’t see the attacker clearly, but she followed him and saw him standing outside the house with the axe, she said.

“He looked to his right and left and quickly ran away,” Shanti said.

Police Inspector Koteswara Rao was patrolling the area at around 11:30 p.m. when he got word about the attack from villagers and rushed to Pastor Koti Reddy’s house, where he found him bleeding profusely.

“I immediately took him to the government hospital nearby, but given the severity of his condition, shifted him to a private hospital in the neighboring town,” Rao told Morning Star News.

After questioning family members and neighbors, police took 11 suspects into custody, he said. Key eyewitnesses informed them that one suspect, Manne Shiva Narayana, also known as Shivayya, was seen walking outside the pastor’s house with an axe that night. 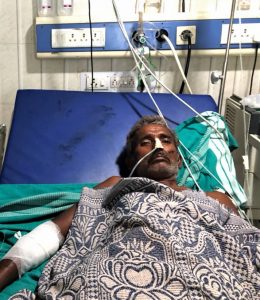 Officers searched his house, seized the axe and took him into custody, Rao said.

“He is a staunch devotee of Shiva,” one of the principle Hindu deities, the inspector said. “He confessed that he wanted to ‘finish’ the pastor that night. He said he was offended by the pastor’s routine of sharing the gospel in the village.”

Shiva Narayana has deep-seated hatred toward Christianity, Rao said. Though police found no affiliation with any Hindu extremist groups, Shiva Narayana confessed that it was ‘hate’ that drove him to attack the pastor, the police officer said.

Villagers who requested anonymity told Morning Star News that Shiva Narayana is a self-proclaimed Shaiva Sadhu, a Hindu “holy person” identified by orange dress like that of Hindu ascetics known as Aghori. They said he is 34 and single.

He frequently travels to the Mallikarjuna Jyothirlinga temple, dedicated to the Hindu deity Shiva and wife Parvati, in Srisailam, about 250 kilometers (155 miles) from Rentachintala, villagers said.

“He is very well known in his circles there,” one said.

Pastor Koti Reddy’s son-in-law, John Paul, told Morning Star News that the pastor spoke a few times to the family about the Shaiva Sadhu getting the pastor into religious arguments on faith, and that he requested the family pray for him.

“He was in trouble a couple of times because of boldness in professing Christianity,” he said. “He was several times confronted by people who opposed him distributing gospel tracts, but he never stopped.”

The pastor’s wife said he would write biblical verses on the walls of people’s houses, and that if people objected, he would stop and go away. Inspector Rao said police went to all the places in the village the pastor would visit in a day, and “nobody expressed opposition to the biblical verses on their walls, since this area is mainly dominated by Hindus converted to Roman Catholicism.”

Rao said that, in the jail cell, Shiva Narayana immediately objected to the picture of a cross that an inmate had drawn long ago and asked officers to transfer him to another cell.

“We were able to observe in the Shaiva Sadhu high levels of intolerance,” Rao said. “He did not want to be even physically present in a room where a cross is drawn on the wall.”

Shiva Narayana was charged with attempted murder, punishable by imprisonment of up to 10 years and a fine, with the possibility of imprisonment for life.

Pastor Koti Reddy was unconscious when he was brought to the hospital, Dr. Sudheer Bhargava Reddy told Morning Star News.

“If he had been brought in 30 minutes later, we would not have been able to save him,” he said.

“The loss of blood was excessive,” he said. “We first attended to the cuts, and there was urgent need for blood transfusion. He is responding well to the treatment, and as the blood clots clear up, we are operating on him.”

Surgery on Friday (April 6) to repair the pastor’s right arm was successful, and the same operation, involving plates and screws, will take place this week on his left arm, Bhargava Reddy told Morning Star News.

“It would take at least 45 days for the patient to move his hand, and in order to be able to use his hand very well, he needs to rest for at least 75 days,” he said.

He said that a CAT scan shows no major damage to the pastor’s head, and that his frequent headaches can be minimized with medicines and rest.

“God did not let the blows be very hard and heavy,” she said. “God lifted him up and held him in His hands safe. This attack is only to bring glory to God.”

The couple’s children were deeply disturbed to see their father’s condition at the hospital, Shanti said.

“I am trying to be strong for them,” she said.

The member of the Legislative Assembly from Guntur West, Phillip C. Tocher, visited the pastor and his family in the hospital on Tuesday (April 3). After doctors briefed him on the pastor’s condition, he told the family that the ruling Telugu Desam Party would pay all the expenses for treatment, they said.

Originally from Giddalur in Prakasam District, Pastor Koti Reddy moved to Rentachintala village 20 years ago with his wife and children, where he now leads a house church.

“My husband comes from a Hindu family whose house was less a home to live in than like a temple or a dwelling place for Hindu deities and devotees,” Shanti said. “Their family would host several pujas [prayer rituals] and yaagas [ritual offerings] every year, and he was totally involved in idol worship.”

When ill in his youth, he was subject to a shaman’s “tricks,” she said, but he was completely healed after receiving prayer at a Christian church service. Having been freed of evil spirits, she said, he devoted himself completely to Christ, and “it was then through a pastor my parents fixed my marriage with him.”

The couple moved from Krishna District to Rentachintala village after Pastor Koti Reddy told his wife that God was calling him to serve there, she said.

“He saw Rentachintala in a vision God gave him when he prayed about his calling,” she said. “The village was exactly how he described it to me.”

The pastor bicycled around the village sharing the gospel, she said.

“He distributes gospel tracts, and if people show interest, he would have deeper discussions with them, and pray with them even on the road,” Shanti said.

The pastor habitually began his days at 5 a.m. and would spend at least three hours in the morning on his knees worshipping the Lord, she said.

“In my 25 years of marriage, I had never seen him picking fights or arguing with anyone,” she said. “As our boys grew up, several times when they would get into fights with their friends, and their parents came to complain, he would accept that it was his sons who were wrong.”

The family requested prayer for healing for the pastor and strength for them.

The hostile tone of the National Democratic Alliance government, led by the Hindu nationalist Bharatiya Janata Party, against non-Hindus, has emboldened Hindu extremists in several parts of the country to attack Christians since Prime Minister Narendra Modi took power in May 2014, religious rights advocates say.

India ranked 11th on Christian support organization Open Doors’ 2018 World Watch List of countries where Christians experience the most persecution, up from 15th the previous year, and ahead of Saudi Arabia, Nigeria and Egypt.