Has he seen a Vision of things is to come? 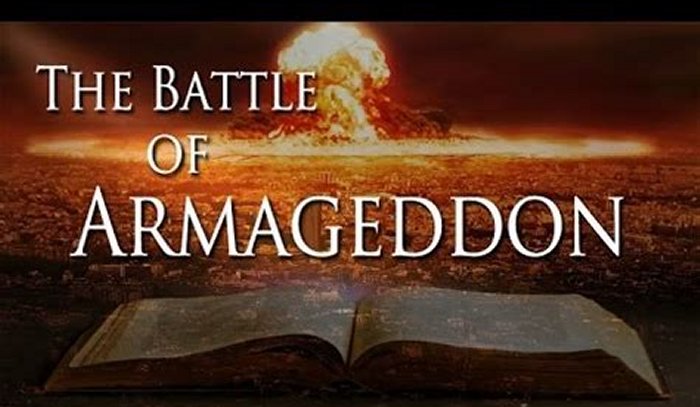 A War Is Coming That Will ‘End Our Civilization’ – Vladimir Putin

In the article re-posted below, I am sure he is speaking of the Police State that is taking place in America. Imagine that, a Communist speaking about taking of peoples rights!

The War that WILL end all wars is closer than most people think! Every time I see news of this sort my mind always goes to Revelation 16:16, “Then they gathered the kings together to the place that in Hebrew is called Armageddon.” and the song by Johnny Cash, “Goin by the Book”, the Book of Revelation!

What is the Battle of Armageddon?

The word “Armageddon” comes from a Hebrew word Har-Magedone, which means “Mount Megiddo” and has become synonymous with the future battle in which God will intervene and destroy the armies of the Antichrist as predicted in biblical prophecy (Revelation 16:16; Revelation 20:1-3). There will be a multitude of people engaged in the battle of Armageddon, as all the nations gather together to fight against Christ.

The exact location of the valley of Armageddon is unclear because there is no mountain called Meggido. However, since “Har” can also mean hill, the most likely location is the hill country surrounding the plain of Meggido, some sixty miles north of Jerusalem. More than two hundred battles have been fought in that region. The plain of Megiddo and the nearby plain of Esdraelon will be the focal point for the battle of Armageddon, which will rage the entire length of Israel as far south as the Edomite city of Bozrah (Isaiah 63:1).

Because of this history, the valley of Armageddon became a symbol of the final conflict between God and the forces of evil. The word “Armageddon” only occurs in Revelation 16:16, “Then they gathered the kings together to the place that in Hebrew is called Armageddon.”

This speaks of the kings who are loyal to the Antichrist gathering together for a final assault on Israel. At Armageddon “the cup filled with the wine of the fury of [God’s] wrath” (Revelation 16:19) will be delivered, and the Antichrist and his followers will be overthrown and defeated. “Armageddon” has become a general term that refers to the end of the world, not exclusively to the battle that takes place in the plain of Megiddo. Source: Got Questions

Russian President Vladimir Putin has warned that a massive war is coming that will cause the “end of our civilization.”

Speaking at the World Economic Forum this week, Putin said that the elite’s crackdown on people’s civil liberties has exacerbated global tensions and warned that there is “every reason to believe that the tensions might be aggravated even further.”

Citing experts who have compared the current global crisis to the situation in the 1920’s and 30’s, Putin warned fellow world leaders that the world was heading down a dangerous path.

“In the 20th century, the failure and inability to centrally resolve such issues resulted in the catastrophic World War II,” Putin said.

“Of course, nowadays such a heated conflict is not possible, I hope that it’s not possible in principle, because it would mean the end of our civilization.”

Summit.news reports: Putin said that the “destruction of traditional values” and freedom itself was on the line if the situation is allowed to deteriorate to the point of conflict where it’s “all against all.”

Elsewhere in his talk, Putin addressed Internet censorship, asserting that social media networks were now competing with elected governments over monopoly of power.

“We are now talking about economic giants, aren’t we? In certain areas, they are competing with states and their audience can include millions and millions of users,” said Putin.

“Here is the question, how well does this monopolism correlate with the public interest?” he asked. Source

Putin may be offering some insight out of sincerity, or, he may be just another player in the Global Game.  Take what he offers into consideration and weigh it against the Word of God.  Let the Holy Spirit lead you to all TRUTH.

It is hard in these bizarre times, to know what is real and what is theater.  The WHOLE WORLD IS A STAGE for real.  So many different productions going on who can sort them out.  Since the world is now GODLESS and has NO MORAL COMPASS… anything goes.  No one feels any compulsion to speak only what is true.  They will speak whatever serves their purpose.  If there is no conflict, they will manufacture some, if they need bloodshed they are more than happy to provide it.  How many people are injured and/or exploited in the process is no concern.  The END RESULT is the only consideration.  Everyone is in hot pursuit of their own goals and ambitions.

We are on a Highspeed SUPERHIGHWAY to HELL.  The entire earth is being whipped into a frenzy by the GLOBAL ELITE who are feverishly working to prepare for the arrival of their gods.  They care not one twit for HUMANITY.  They HATE humanity.  The blood of the fallen flows through their veins.  The Fallen who were denied salvation because their sin was so great.  The Fallen who are forced to bow before humans who inherited everything that they desired.  YOU.  YOUR DESTRUCTION is their END GOAL.

Armageddon is the Last Act.  One that has been foretold from the beginning.  ONE they have been desirous to see.  They have tried throughout history to hasten its arrival but everything always happens in GOD’s Time.

NOW, they see that time nearing and they are feverishly working in the attempt to gain something from it that gives them some satisfaction.  That mainly is to take as many humans down with them as possible.  To steal your salvation from you, to destroy your soul, to capture your spirit and turn you from GOD.

We do not know with certainty what must happen before Armageddon.   We do know it is NEAR.