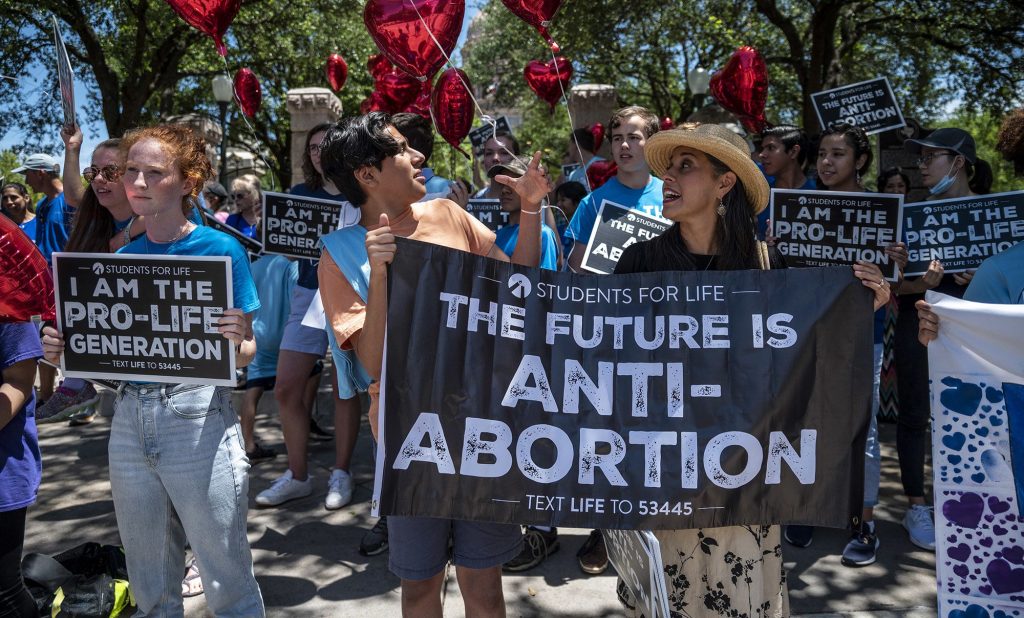 Anti- abortion protesters on May 29, 2021 in Austin, Texas. Picture by Sergio Flores

This year, we will sadly see the lives of hundreds of thousands of Americans needlessly cut short through no fault of their own.

In response, some states and political leaders have answered the call and pushed for medical precautions to prevent these senseless deaths. Incredulously, protesters have taken to the streets demanding these precautions be reversed.

What has caused this angst?

One of the single greatest causes of death in the last 50 years: Abortion.

As local and national lawmakers make efforts to save these precious souls, others are actively fighting to expand this carnage. They have their priorities in the wrong place.

At the same time liberal politicians shut down entire communities over a virus with a 0.68 percent infection fatality rate and rioted in the streets over deaths involving police interactions, they wholeheartedly advocate for the rights of abortion giants such as Planned Parenthood to snuff out the lives of millions upon millions of the unborn.

You won’t find the mainstream media highlighting this generational tragedy.

There is nothing — absolutely nothing — more tragic than callously ending the lives of the most vulnerable in our society.

Sadly, in 1973 our nation’s highest court forced every state in America to allow this practice, no matter how strongly their citizens objected. Since then, the Supreme Court’s decision in Roe v. Wade has resulted in the deaths of 62,500,000 unborn babies.

To put this in perspective, that is 10 times the population of Missouri.

They were our brothers, sisters, friends and loved ones. They were our future leaders, firefighters, doctors, lawyers, truck drivers, preschool teachers, farmers, factory workers and small business owners. But most importantly, they were human beings with a purpose from our Creator.

But the battle to protect the unborn is also being waged in the states. That’s why Mississippi’s latest pro-life law, which is currently being challenged in the Supreme Court, is vital to restoring our national character as a country that protects life.

The Mississippi legislation, which was overwhelmingly supported by the statehouse in 2018, protects an unborn child’s right to life after 15 weeks of pregnancy. At that point, all the major organs have been formed, the heart pumps 26 quarts of blood per day, fingers move separately, the body responds to touch, the unborn baby can feel pain, and successful surgeries can be performed.

Despite commonsense protections proposed by states such as Mississippi, Texas and Alabama, liberal Democrats have attempted to counter this effort by inserting pro- abortion provisions in seemingly every bill that reaches the House floor. They have also introduced extreme legislation such as the grossly misnamed Women’s Health Protection Act, which would overturn virtually all legal restrictions on abortion at the state and federal levels.

If these politicians succeed in their efforts, the fruits of pro-lifers’ 50-year labor of love will vanish overnight.

These states are stepping up and fighting for life. Laws like Mississippi’s demonstrate that the American people still believe in the God-given dignity of every person, born or unborn. The Supreme Court now has a critical opportunity to uphold these truths and stand up for the voiceless.

Together, as a nation, we must continue to fight relentlessly for the sanctity of life — and for expectant mothers needing support. Millions of unborn lives depend on it.

Throughout his tenure in Congress and in the Missouri Statehouse, Rep. Vicky Hartzler has fought for the rights of the unborn. As chairwoman of the Values Action Team, he led efforts in Congress on behalf of faith, family and religious freedom, including multiple pieces of legislation to protect life. This includes stripping Planned Parenthood of federal funding and protecting the Hyde Amendment so taxpayer dollars don’t go toward abortion. [News Leader]