Michael Bloomberg: ‘I Have Earned My Place in Heaven’ ‘It’s not even close.’

Ephesians 2:8-9 For by grace are ye saved through faith; and that not of yourselves: it is the gift of God: Not of works, lest any man should boast. 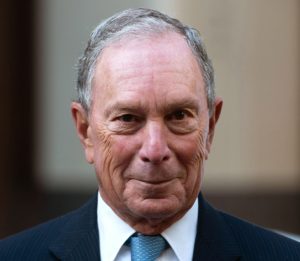 Weekly Standard
Former New York City mayor is pledging to spend $50 million this year to push gun control, the New York Times reports. For this and other deeds (such as taking on obesity and smoking), Bloomberg believes he’s going to heaven.

Well Mr. Bloomberg, I have news for you. No sir you will NOT and HAVE NOT earned a place in Heaven. You have earned a place in Hell and unless you repent and turn from your wicked ways, you will soon be there! No one earns a place in heaven. It cannot be purchased for any amount of money. It is a free gift from GOD, (who you say “if he exists”) if one believes in and accepts his Son Jesus Christ. There is only one way into heaven and Jesus is that way!!

Mr. Bloomberg, just because you are Jewish it does not give you automatic entry into heaven as most ignorant people think. You are no better the murdering Muslim who prays to Allah and Mohammad. You are doomed to hell unless you accept Christ as Savior. Just because you are rich and THINK you’re doing good works you are not.

Matthew 19:21-24 Jesus said unto him, If thou wilt be perfect, go and sell that thou hast, and give to the poor, and thou shalt have treasure in heaven: and come and follow me. But when the young man heard that saying, he went away sorrowful: for he had great possessions.Then said Jesus unto his disciples, Verily I say unto you, That a rich man shall hardly enter into the kingdom of heaven. And again I say unto you, It is easier for a camel to go through the eye of a needle, than for a rich man to enter into the kingdom of God.

What an arrogant statement that is. Mr. Bloomberg, you seem to think that you will be granted some special status in Heaven and that is far from truth. You sir, will stand in shame on judgement day just before you are cast into hell with Satan, your god you serve here on earth. I suppose you think bodyguards will be protecting and ushering you through. That is laughable Mr. Bloomberg!

Your endorsement of Abortion and Homosexuality are just a couple strikes against you and will keep you from entering sir. GOD keeps a record of everyone’s activities and unless Jesus Christ is your advocate when you stand in judgment you will be judged harshly.

From the Weekly Standard

Mr. Bloomberg was introspective as he spoke, and seemed both restless and wistful. When he sat down for the interview, it was a few days before his 50th college reunion. His mortality has started dawning on him, at 72. And he admitted he was a bit taken aback by how many of his former classmates had been appearing in the “in memoriam” pages of his school newsletter.But if he senses that he may not have as much time left as he would like, he has little doubt about what would await him at a Judgment Day. Pointing to his work on gun safety, obesity and smoking cessation, he said with a grin: “I am telling you if there is a God, when I get to heaven I’m not stopping to be interviewed. I am heading straight in. I have earned my place in heaven. It’s not even close.”

Sorry Folks, good deeds, thinking you’re a good person fighting evil won’t get it done!! ONLY faith in Jesus Christ and what he did on the Cross of Calvary will save you and gives you the right to “walk the streets of gold”!!