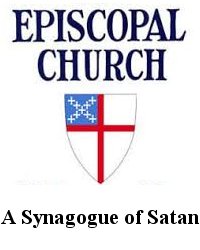 Genesis 1:26-27 “And God said, Let us make man in our image, after our likeness: and let them have dominion over the fish of the sea, and over the fowl of the air, and over the cattle, and over all the earth, and over every creeping thing that creepeth upon the earth. 27 So God created man in his own image, in the image of God created he him; male and female created he them.

“As long as ‘men’ and ‘God’ are in the same category, our work toward equity will not just be incomplete. I honestly think it won’t matter in some ways,” the Rev. Wil Gafney

2nd Corinthians 11:14-15 “And no marvel; for Satan himself is transformed into an angel of light. 15 Therefore it is no great thing if his ministers also be transformed as the ministers of righteousness; whose end shall be according to their works.”

Synagogue of Satan begins Debate on Book of Common Prayer

Book of Common Prayers? Hummmm, is that like the book of Mormon?

Matthew 6:7 “But when ye pray, use not vain repetitions, as the heathen do: for they think that they shall be heard for their much speaking.”

Got Questions – Originally collected, edited, and at least partially written by English Reformer Thomas Cranmer, the Archbishop of Canterbury, the Book of Common Prayer was the first prayer book to include liturgical services published in English. The book includes written prayers, of course, but also much more: catechisms, the “daily office” (essentially a thrice-daily Bible reading program), collects (short prayers to be recited at certain points in the service), full orders of service for important occasions such as holidays and baptisms, a psalter (the biblical psalms arranged for a monthly reading), and a lectionary (a list of readings).

Not everyone in England accepted the publication of the Book of Common Prayer. Groups outside of the Church of England, called “Nonconformist” churches or “Dissenters,” objected to the king’s insistence that all churches use the Book of Common Prayer in their services. Groups such as the Baptists, Congregationalists, Presbyterians, and Methodists faced church closure if they did not agree to use the prayer book. One preacher in Bedford, England, by the name of John Bunyan refused to use the Book of Common Prayer in his church. He was arrested on November 12, 1660, and spent the next 12 years in jail. Bunyan considered it but a small price to pay for following his conscience and standing for his right to pray in the Spirit, free from the strictures of ecclesiastical authority. While in jail, Bunyan wrote his classic allegory The Pilgrim’s Progress.

The Book of Common Prayer is a resource for those who appreciate liturgical worship, and it contains some beautifully written prayers. While the Book of Common Prayer may be an aid to worship, we should never allow our worship of God to be limited to a liturgy. Ultimately, our prayers should be our own, not those written by another person. As Bunyan said from his jail cell, “Prayer is a sincere, sensible, affectionate pouring out of the heart or soul to God, through Christ, in the strength and assistance of the Holy Spirit, for such things as God has promised, or according to His Word, for the good of the church, with submission in faith to the will of God” (A Discourse Touching Prayer, 1662). Source: Got Questions

The Homosexuals, Lesbians and Tranny’s have effectively infiltrated this false religion.

This is nothing new as these Hound of Hell have also changed the Marriage ceremony. Episcopal Church Eliminates Words Husband, Wife and Procreation from Marriage Ceremonies

WP – The terms for God, in the poetic language of the prayers written for centuries, have almost always been male: Father. King. Lord.

And in the Episcopal Church, the language of prayer matters. The Book of Common Prayer, the text used in every Episcopal congregation, is cherished as a core element of Episcopal identity.

This week, the church is debating whether to overhaul that prayer book — in large part to make clear that God doesn’t have a gender.

“As long as ‘men’ and ‘God’ are in the same category, our work toward equity will not just be incomplete. I honestly think it won’t matter in some ways,” said the Rev. Wil Gafney, a professor of the Hebrew Bible at Brite Divinity School in Texas who is on the committee recommending a change to the gendered language in the prayer book.

Gafney says that when she preaches, she sometimes changes the words of the Book of Common Prayer, even though Episcopal priests aren’t formally allowed to do so. Sometime she switches a word like “King” to a gender-neutral term like “Ruler” or “Creator.” Sometimes she uses “She” instead of “He.” Sometimes, she sticks with the masculine tradition. ” ‘Our Father,’ I won’t fiddle with that,” she said, invoking the beginning of the Lord’s Prayer that Jesus taught his disciples to say in the book of Matthew.

Read the rest at the God Hating Washington Post.

What do these Devils in the Episcopal Church believe? Again, let’s go to Got Questions.

The Episcopal Church, USA (ECUSA) is the official organization of the Anglican Communion in the United States. Most of the earliest Colonists to America were Anglican Puritans, and the Anglican Church became the established church of Virginia, Maryland, New York, North Carolina, South Carolina, and Georgia during the Colonial Period. After the American Revolution, the Anglican Church in America formed an independent body in 1789 and called itself the Protestant Episcopal Church. On their website, the ECUSA is described as a “middle way between Roman Catholic and Protestant traditions.” Like the Catholic Church, the Episcopal Church upholds the sacraments as essential to salvation, and like Protestant churches, it denies the supremacy of the Pope as the Vicar of Christ on earth.

The word Episcopal comes from the Greek word that is usually translated “bishop” and points to the church’s understanding that a bishop is the primary ruler of the church. Under the Episcopal form of government, the bishop’s authority is equal to that of the apostles and follows a line of succession by the laying on of hands in ordination. Priests come under the authority of the bishops and are responsible for the teaching and administration of the local churches. Throughout the history of the ECUSA, their doctrine and practice have been generally in line with that of the Anglican Church.

Over the years, the Episcopal Church has gradually accepted changes that have strained its ties with the Anglican Communion and have even resulted in schisms. In 1873, the Reformed Episcopal Church was formed over disagreements about the freedom to worship with non-Anglicans. In 2006, Jefferts Schori was elected as the Presiding Bishop of the ECUSA, the first woman to hold that office. That election strained ties with the Anglican Communion, as no other church body recognizes the ordination of women as bishops. Bishop Schori has made history in other ways, as well. While the Bishop of Nevada, she allowed for the blessing of same-sex unions in her diocese. When openly gay Bishop Gene Robinson was examined for qualification to continue in ministry, Bishop Schori voted to confirm him. At the 2009 meeting of the House of Bishops, over which Schori presided, that body voted that “any ordained ministry” should be open to gay and lesbian members as long as they were in a committed relationship. As a result of these positions on homosexuals in the church, nearly 700 dissenting parishes have formed the Anglican Church in North America, which has been recognized in full communion by the Anglican Churches of Nigeria and Uganda, which represent about 1/3 of all Anglicans worldwide. Several dioceses have also severed ties or threatened to sever ties with the ECUSA over that same issue.

Though there may be genuine disciples of Christ within the Episcopal Church, it seems that the general characteristic of the church is like the people that Ezekiel ministered to: Ezekiel 33:31-32 “And they come unto thee as the people cometh, and they sit before thee as my people, and they hear thy words, but they will not do them: for with their mouth they shew much love, but their heart goeth after their covetousness. 32 And, lo, thou art unto them as a very lovely song of one that hath a pleasant voice, and can play well on an instrument: for they hear thy words, but they do them not.” Got Questions

And I will add: Matthew 15:7-9 “Ye hypocrites, well did Esaias prophesy of you, saying, 8 This people draweth nigh unto me with their mouth, and honoureth me with their lips; but their heart is far from me.9 But in vain they do worship me, teaching for doctrines the commandments of men.”

Harlot Clergy of the Lutheran, Episcopal, United Church of Christ and others in lockstep with Planned Murderhood