Revelation 3:21 “To him who overcomes will I grant to sit with Me in My Throne, even as I also overcame, and am sat down with My Father in His Throne” 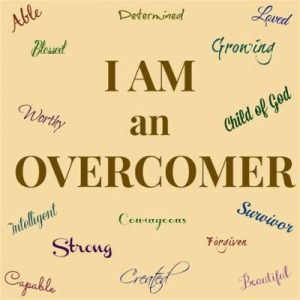 In each one of the seven Messages of Christ to the seven Churches of Asia, the demand to be an overcomer is given and the reward is specified (Revelation 2:7, 2:11, 2:17, 2:26; 3:5, 3:12, 3:21). Considering that this admonition is given seven times, it should be obvious that the Lord demands that the Believer be an overcomer.

So, the great question is, “How does a person come to the place that the Lord would say that he or she is an overcomer?”

Another question looms, “What does it mean to be an overcomer?”

First of all, the Believer must understand that, within himself, he cannot hope to arrive at this place and position which the Lord demands. Such is absolutely beyond the reach of any person, no matter who he might be, and we speak of the effort being made by the individual himself or herself. Regrettably, there are quite a few people who actually think they can do such, and who would conclude themselves to be overcomers, even though their effort is totally unbiblical. While they might refer to themselves as overcomers, the Lord, Whose decision Alone matters, doesn’t say so. The Lord will declare a person to be an overcomer only on one premise.

For a Believer to attempt to be an overcomer by his own means, he must resort to Law, because that’s the only place to go. He may not look at it as Law, and he may not think of it as Law, but, if it’s not Grace, it’s Law.

So, as should be obvious, there is no hope for the Believer down that path.

The only way that one can be an overcomer is God’s Way, which is according to the following:

The Believer must place his Faith solely and completely in Christ and the Cross; he must get his eyes off himself and completely on Christ and what Jesus did for us in the Atonement, which will then give the Holy Spirit latitude to work in such a life. That person is then an overcomer, and so judged by the Lord (Romans 6:1-14; 8:1-2, 8:11; 1st Corinthians 1:17-18, 1:23; 2:2; Galatians 6:14).

Most all Believers look to themselves in trying to ascertain whether they are an overcomer or not. To be sure, when one looks at oneself, one will find flaws aplenty. So one must discontinue looking at oneself, and look exclusively to Christ and the Cross.

This definitely does not mean that we ignore the flaws and faults in our person. Not at all! But it does mean that we’ll never get victory over these flaws and faults by our own machinations, even as religious as those machinations might be. The victory comes by faith, but it comes only by Faith anchored squarely in Christ and the Cross. If anything else is made the object of faith, that’s when the victory stops, and stops instantly! The Holy Spirit will work in our hearts and lives, Who Alone can bring about these things, strictly on the basis of the Finished Work of Christ (Romans 8:2). In other words, the Cross of Christ is what gives the Holy Spirit the legal right to do what He does.

Therefore, to be an overcomer, one has to place his faith solely in Christ and the Cross. When one does this, one is instantly judged by the Lord as an “overcomer.” This is not something that one works toward, or gradually comes into, but is a place and position we have solely in Christ. He Alone is the Source, and the Cross is the means.

Revelation 2:7 “He who has an ear, let him hear what the Spirit says unto the Churches”

The Lord addressed the “overcomer” seven times; likewise, seven times He demands that we “hear what the Spirit says unto the Churches.” One time would be significant; but considering that this Command is given seven times, I should think we would realize just how important it actually is.

He gave it seven times simply because of its vast significance. The problem with the modern Church, which has been the problem with the Church from the very beginning, is that it hears what men have to say, but not what the Spirit has to say. The utter absurdities that are taking place in the modern Church presently, i.e., worship, so-called; prayer, so-called; Church growth, so-called; all type of prophecies, so-called, all type of proposed manner of deliverances, which are, in fact, no deliverances at all; all, and without exception, at least of this nature, fall into the category of being unscriptural. If they are unscriptural, then the Spirit of God is not the One Who has directed this.

For instance, even though basically the entirety of the Church world has opted for “The Purpose Driven Life” philosophy, it is strictly of man and by man, which means it is not by the Lord. Although “The Purpose Driven Life” is a catchy title for a book, it’s not what the Spirit of God is saying to the Churches. Neither is the “Government of Twelve (G-12)” debacle from the Lord. It also is man-birthed and man-instituted, which means it’s not what the Spirit is saying to the Churches. You can say the same for the “Word of Faith” doctrine, which actually repudiates the Cross of Christ.

What, in fact, is the Spirit of God saying to the Churches?

The Message the Spirit of the Lord is promoting at present, that, in fact, which He has ever promoted, is “Jesus Christ and Him Crucified” (1st Corinthians 1:23). The Church has left the Cross; whenever the Church leaves the Cross, it goes into spiritual declension and all type of fanaticism.

When man fell in the very beginning, the Lord took man to the Cross (Genesis chapter 4). When the Lord began to carry out the provision of Redemption by calling a man to do so, namely Abraham, He took him to the Cross (Genesis 12:7). When the Law of Moses was given, the central theme of that Law was the Sacrificial System, which was, in effect, the Cross of Christ in symbol (Leviticus Chapters 1-7). When Jesus finally came to this world, His goal, His destination, was the Cross (Isaiah Chapter 53). When the Church was established by the Apostle Paul under the guidance of Jesus Christ, it was established on the Foundation of the Cross (1st Corinthians 2:2).