Ichabod – The departed Glory of God. God, and/or The Spirit of God, has never been there, or has left.

It is very easy for Ichabod to be written over the door of a church building. The majority have NEVER had the Glory of God to begin with!’

It is another thing for Ichabod to be written over a nation. Israel had that happen many many times. God would remove his hand of protection and blessing and they would go into captivity. They would repent, turn from their wicked ways, and HIS Glory and protection would return. But that would not last for long and they would once again forget God and turn wicked.

It is no different today with the church and nations…, especially America. The church, for the most part, and there are few exceptions, have kicked God out and embraced the Social Gospel of Secularism. They DO NOT Preach the True Gospel of Jesus, and have gone apostate. The LORD has departed from them.

So, as the church goes, so does America! 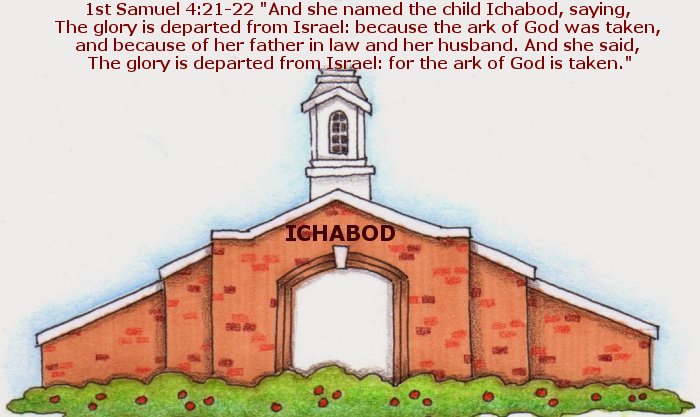 The term Ichabod is found in two places in the Bible,1st Samuel 4:21 and 14:3. Ichabod was the son of Phinehas and the grandson of Eli, the priest of the Lord in Shiloh. The sad story of Eli and his two wayward sons, Phinehas and Hophni, is found in 1st Samuel, chapters 2 and 4. Hophni and Phinehas died in battle with the Philistines who captured the Ark of the Covenant and took it away from Israel. Upon hearing this terrible news, Eli fell backward off his chair and broke his neck and died. Phinehas’s pregnant wife went into labor and bore a son.

“And she named the child Ichabod, saying, ‘The glory has departed from Israel!’ because the ark of God had been captured and because of her father-in-law and her husband. And she said, ‘The glory has departed from Israel, for the ark of God has been captured’” (1st Samuel 4:21–22). The word Ichabod means literally “inglorious” or “there is no glory,” and in her pain and despair, the woman (who is unnamed in Scripture) lamented over the loss of the glory of God from Israel.

The glory of God is used to describe God’s favor and blessings toward His people. In the Old Testament, God’s glory is seen as a pillar of fire and cloud that followed the Israelites during the exodus from Egypt, guiding and guarding them (Exodus 13:21). Once the Ark of the Covenant was built and placed in the tabernacle in the wilderness, and later in the temple in Jerusalem, God’s glory resided there as a symbol of His presence among His people. When the Ark was captured by the Philistines, the glory departed from the Israelites—Ichabod became a reality.

Jesus later refers to the concept of the glory of God leaving Israel. In His last message to the populace of Israel, His final word to the religious leaders was “O Jerusalem, Jerusalem, you who kill the prophets and stone those sent to you, how often I have longed to gather your children together, as a hen gathers her chicks under her wings, but you were not willing. Look, your house is left to you desolate” (Matthew 23:37–38). That was His final statement of judgment on Israel for the rejection of their Messiah. He has indicted their leaders and, by indicting the leaders, indicted all the people who followed the leaders. And now He says their house is left desolate—Ichabod, the glory is departing.

Notice that He says your house is desolate. Not My house, not My Father’s house, as He used to call it. Now it’s your house because God has left—Ichabod! God is no longer there, it’s not the Father’s house; it’s not My house; it’s your house. The Greek word translated “desolate,” means “abandoned to ruin.” This place is in abandonment. God has left. It’s cursed, devoted to ruination. And they won’t see Jesus again till He comes in full Messianic glory (Matthew 23:39).

It is a terrible thing to experience the loss of the glory of God. And while Israel’s ruin was temporary “until the fullness of the Gentiles” would be brought into the kingdom of God on earth (Romans 11:25), one wonders how many churches today have lost the glory of the Lord, whether willingly or unknowingly. The same things that caused Ichabod in Israel—sin, disobedience, idolatry—are present in many of today’s churches. Christians must never take the glory of God in our midst for granted, lest we wake up one day and find that Ichabod has become a reality among us. Source: Got Questions