1. First and foremost, they HATE Jesus Christ and any mention of  HIS name, the Cross, HIS shed Blood, Sin and Hell.

2. They are a “chip of the old block”! They are of their father the devil!

Even cults — that believe they are Christian — that speak the name of Jesus are persecuted!

Robert Spencer | Jihad Watch – A friend joked with me earlier when I showed him this, “I never saw that coming, maybe the BBC are bragging about it now that genocide is assured”. Does this make the BBC “Islamophobic” now? no, they managed to publish this without mentioning the cause, “honest Guv, they just vanished”. Of course I joke though with discomfort and horror, full of anger. I’m more used to writing fairly highly technical “knowledge base” articles, so forgive me. 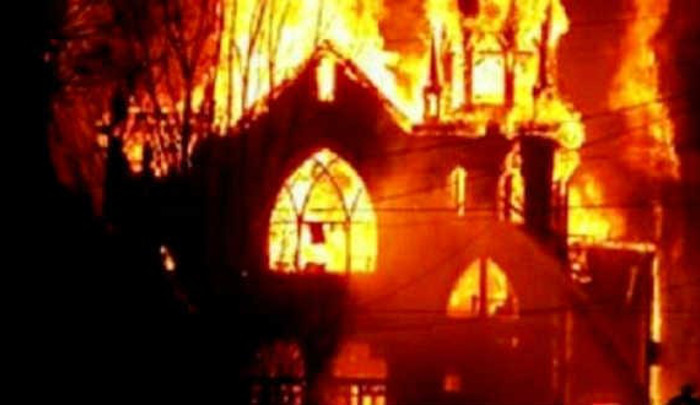 The persecution of Christians in parts of the world is at near “genocide” levels, according to a report ordered by Foreign Secretary Jeremy Hunt.

The review, led by the Bishop of Truro the Right Reverend Philip Mounstephen, estimated that one in three people suffer from religious persecution.

Christians were the most persecuted religious group, it found.

Mr Hunt said he felt that “political correctness” had played a part in the issue not being confronted.

The interim report said the main impact of “genocidal acts against Christians is exodus” and that Christianity faced being “wiped out” from parts of the Middle East.

It warned the religion “is at risk of disappearing” in some parts of the world, pointing to figures which claimed Christians in Palestine represent less than 1.5% of the population, while in Iraq they had fallen from 1.5 million before 2003 to less than 120,000.

The obsenity of this being allowed to happen is as vile as any other genocide, there were just as many warnings for those who made the effort to look, just as there were coming from Germany in the 1930s. I will not single out any specific political player, there were many involved to varying degrees. Most of the churches in the west have been more bothered with the welfare of other minorities and faiths.

This review they use as a source has been a long time coming, was only commissioned less than 18 months ago will end up being a “what happened” rather than a “what can we do”, far too little and far to late.

“Evidence shows not only the geographic spread of anti-Christian persecution, but also its increasing severity,” the Bishop wrote.

“In some regions, the level and nature of persecution is arguably coming close to meeting the international definition of genocide, according to that adopted by the UN.”

The foreign secretary commissioned the review on Boxing Day 2018 amid an outcry over the treatment of Asia Bibi, a Christian woman who faced death threats after being acquitted of blasphemy in Pakistan.

Its findings come after 359 people were killed and more than 500 wounded in attacks at hotels and churches in Sri Lanka on Easter Sunday.

Mr Hunt, who is on a week-long tour of Africa, said he thought governments had been “asleep” over the persecution of Christians but that this report and the attacks in Sri Lanka had “woken everyone up with an enormous shock”.

We had a muslim commentator on the site yesterday bringing out the old lie of palestinian genocide, of course, the opposite is the case, palestinian numbers have grown exponentially, the truth is, one of the oldest Christian communities in the world, from the birthplace of Jesus has all but disappeared. The fake victim carrying out the same crime they accuse others of.

He added: “I think there is a misplaced worry that it is somehow colonialist to talk about a religion that was associated with colonial powers rather than the countries that we marched into as colonisers.

“That has perhaps created an awkwardness in talking about this issue – the role of missionaries was always a controversial one and that has, I think, also led some people to shy away from this topic.

Missionaries? the Iraqi and Syrian Christians were there for 2000 years. Did the BBC just dump in talk of colonists and missionaries to deflect?

“What we have forgotten in that atmosphere of political correctness is actually the Christians that are being persecuted are some of the poorest people on the planet.”

In response to the report, the president of the Board of Deputies of British Jews, Marie van der Zyl, said Jews had often been the targets of persecution and felt for Christians who were discriminated against on the basis of their faith.

“Whether it is in authoritarian regimes, or bigotry masked in the mistaken guise of religion, reports like the one launched today remind us that there are many places in which Christians face appalling levels of violence, abuse and harassment,” she said.

Well, for the history books, BBC’s “Warning” can be found here, and I’ll save an archive incase they change it here.