YES! If you quit believing, turn your back on the Lord Jesus Christ, and return to your wicked ways.

First, you must determine if you are Saved, Born Again! You can’t lose something you have never possessed! 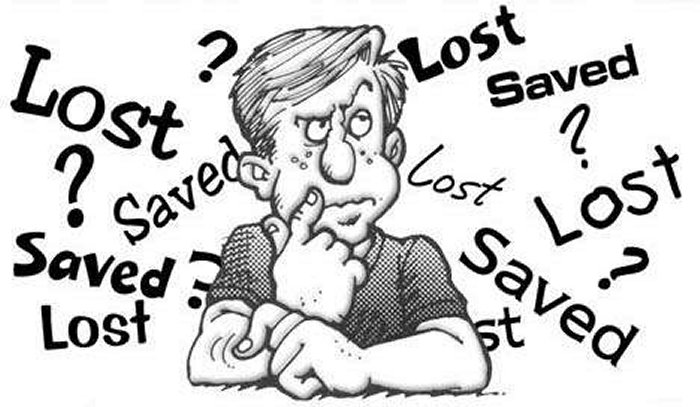 2nd Peter 2:19-22 “While they promise them liberty, they themselves are the servants of corruption: for of whom a man is overcome, of the same is he brought in bondage. 20 For if after they have escaped the pollutions of the world through the knowledge of the Lord and Saviour Jesus Christ, they are again entangled therein, and overcome, the latter end is worse with them than the beginning. 21 For it had been better for them not to have known the way of righteousness, than, after they have known it, to turn from the holy commandment delivered unto them. 22 But it is happened unto them according to the true proverb, The dog is turned to his own vomit again; and the sow that was washed to her wallowing in the mire.”

Peter is saying the same thing here that Paul said in Hebrews 6:4-6 and Hebrews 10:26-29. He is speaking of Believers, that is, people who have truly been Born-Again, who have now ceased to believe Christ and what He did at the Cross. While they may claim to believe Christ, they have actually divorced Him from the Cross, hence the Apostle saying that they are “denying the Lord Who bought them,” i.e., denying what Christ did for them at the Cross (2:1).

These are not individuals, as some claim, who have merely heard about the Lord, and who have refused to accept Him. These are people who have “known the way of Righteousness,” which means that they once accepted the Righteousness of Christ and were Born-Again. Actually, no unsaved person can “know the way of Righteousness.” These individuals knew that way, but turned to something else, which Peter likens to a “dog turning to his own vomit again, and a hog that was washed going back to her wallowing in the mire.” This completely refutes the unscriptural doctrine of Unconditional Eternal Security.

We teach Conditional Eternal Security. As long as the Faith of a person remains in Christ and what He did at the Cross, that person is eternally secure. If the person moves his faith to something else, and it doesn’t really matter what the “something else” is, he loses his way. The correct ingredient of Salvation is Faith in Christ and what Christ did at the Cross. If that is denied, they have “crucified to themselves the Son of God afresh, and put Him to an open shame” (Hebrews 6:6). And if a person stays in that condition, and we speak of continuing to deny the Cross, such a person will be eternally lost, despite the fact that they once were saved.

As previously stated, this is the sin of the modern Church. It professes Christ loudly, but it denies the Cross.

How do I know that?

I know that because of the many and varied schemes offered which claim to be the way. I speak of the “Purpose Driven Life” doctrine, the “Government of Twelve” doctrine, the “Word of Faith” doctrine, “Denominationalism,” “works righteousness,” etc. If one accepts these doctrines, and a host which we haven’t named, one is “denying the Lord Who bought them” (Hebrews 2:1).

If there ever was a time that Believers should renew their Faith in Christ, it is now!

That does not mean that a person can not repent once again and come back to the Lord. Here is what the Apostle Paul said:

Hebrews 6:4-6 “For it is impossible for those who were once enlightened, and have tasted of the Heavenly Gift, and were made partakers of the Holy Spirit, And have tasted of the good Word of God, and the powers of the world to come, If they shall fall away, to renew them again unto Repentance; seeing they crucify to themselves the Son of God afresh, and put Him to an open shame”

These Passages, as should be overly obvious, completely refute the unscriptural doctrine of Unconditional Eternal Security.

The people to whom Paul was writing were Christian Jews. They had grown discouraged for one reason or the other, and some of them went back into Temple worship, actually the old Mosaic Law. The Apostle here warns them that if they fall away from Faith in Christ and what Christ did at the Cross, they have then repudiated the Plan of Salvation, which means there is no way for true Repentance to be enjoined.

The manner of Salvation is faith; however, it is Faith in the correct Object, which is Christ and Him Crucified. As long as one maintains Faith in Christ and what He did at the Cross, Salvation is maintained. If one loses truth in Christ and the Cross, thereby placing faith in Something else (and it really doesn’t matter what the something else is), if they continue on that path, they will ultimately lose their soul.

These individuals to whom Paul was writing were not people who had merely heard the Gospel and now had decided not to accept it. They were people who had wondrously and gloriously accepted the Gospel, had been thereby “enlightened,” which is impossible for an unsaved person, and they had also “tasted of the Heavenly Gift, and Were made partakers of the Holy Spirit.”

The Greek word for “partaker” is “metochos,” which means “a sharer, a partaker,” which no unbeliever could be.

No! These were individuals who had accepted Christ, which means they had been Born-Again. But now they are ceasing to believe in Christ; by doing what they did, they were making a mockery of Christ, actually “crucifying to themselves the Son of God afresh, and putting Him to an open shame.”

Because it is so important, let us say it again:

Faith is the key to Salvation (Romans 5:1). If that, in fact, is the case, and it most definitely is, if faith ceases to be, at least in the correct Object, which is Christ and the Cross, then Salvation is forfeited. This is what the Apostle is saying, which means that what these Christian Jews were doing was serious indeed!

But I doubt once they lose Salvation they will want to come back!

1st Timothy 4:1 “Now the Spirit speaketh expressly, that in the latter times some shall depart from the faith, giving heed to seducing spirits, and doctrines of devils;”