And the Survey Says…,

John 10:1 “Verily, verily, I say unto you, He that entereth not by the door into the sheepfold, but climbeth up some other way, the same is a thief and a robber.” 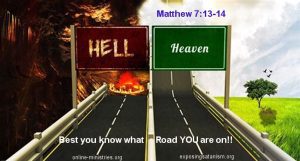 Nope, Notta!! People believe it  because of False Doctrine coming from Fools, (Charlatans and Shysters) who DO NOT know what the Bible says!

The majority of the pulpits spew out a social gospel, instead of the True Gospel of Jesus Christ! The Stupid Sheeple never bother to check and see if the clown in the pulpit is telling them the TRUTH! Why? Because they DO NOT WANT to HEAR the TRUTH, and they CAN NOT HANDLE the TRUTH!

Only Saved – Born Again People make it to Heaven! Read the Word People!

So that is why Hell is expanding. Remember what Jesus said in  Matthew 7:13-14 “Enter ye in at the strait gate: for wide is the gate, and broad is the way, that leadeth to destruction, and many there be which go in thereat: Because strait is the gate, and narrow is the way, which leadeth unto life, and few there be that find it.” Are you a Wide or Narrow Gate Believer?

Do you really want to know if you will make it to Heaven? Here is How!

“A time will come when instead of shepherds feeding the sheep, the church will have clowns entertaining the goats.” – C.H. Spurgeon – We are now in that time!!  Are you a Sheep or a Goat?

At least a third of senior pastors in the United States believe one can earn a place in Heaven by simply being a good person, according to a nationwide survey.

The findings were among several surprising responses as part of a survey conducted earlier this year by the Cultural Research Center at Arizona Christian University.

The American Worldview Inventory 2022 examined more than three dozen beliefs held by pastors. Researchers found that in addition to believing that people can merit salvation based solely on their good works, one-third or more of senior pastors surveyed also believe the Holy Spirit is not a person but rather “a symbol of God’s power.” Others said that moral truth is subjective; sexual relations between two unmarried people who love each other is “morally acceptable” and biblical teaching on abortion is “ambiguous.”

At least a third of those surveyed also said they believe “socialism is preferable to capitalism and that allowing property ownership facilitates economic injustice,” which researchers say could point to the “increase of cultural and political influence into the church.”

After data reported earlier this year found just 37% of Christian pastors have a biblical worldview, the latest CRC report analyzed that research across all major U.S. denominations, and found that a “loss of biblical belief is prevalent among pastors in all denominational groupings.”

The current report focuses on roughly half of those beliefs, revealing that a shockingly large percentage reject biblical teaching on some of the most basic Christian beliefs.

Among Evangelical pastors, for example, around 43% said they do not believe that the personal accumulation of wealth is provided by God for the individual to manage those resources for God’s purposes.

Another 39% of Evangelical pastors surveyed said there is no absolute moral truth and that “each individual must determine their own truth.” Roughly the same percentage (38%) said human life is sacred, while 37% said having faith, in general, is more important than in what — or more specifically, Whom — one has faith.

Perhaps most startlingly, three in 10 Evangelical pastors (30%) do not believe that their salvation is based on having confessed their sins and accepting Jesus Christ as their savior.

George Barna, CRC’s director of research, said the results could be linked to another trend he observed in the data.

“While studying the spiritual behavioral patterns of pastors, it became evident that a large share of them do not have a regular spiritual routine,” Barna said. “There was a correlation between possessing biblical beliefs and a consistent regimen of Bible reading, prayer, worship and confession.

“In some of the denominational groupings, a majority of pastors do not engage in those foundational spiritual practices on a regular basis,” he added. “Yet, among the pastors who have the most consistently biblical beliefs, there is also a daily routine that incorporates all of those disciplines.”

The data from this latest report came from a nationwide study of about 1,000 Christian pastors in May across several segments of churches and/or denominational families. Source Article Here

Why is being a good person NOT ENOUGH to get you into heaven?

If you ask most people what you have to do to get into heaven (assuming they believe in heaven or an afterlife), the overwhelming response will be some form of “be a good person.” Most, if not all, religions and worldly philosophies are ethically based. Whether it’s Islam, Judaism, or secular humanism, the teaching is common that getting to heaven is a matter of being a good person—following the Ten Commandments or the precepts of the Quran or the Golden Rule. But is this what Christianity teaches? Is Christianity just one of many world religions that teach that being a good person will get us into heaven? Let’s examine Matthew 19:16–26 for some answers; it is the story of the rich young ruler.

The first thing we note in this story is that the rich young ruler is asking a good question: “What good deed must I do to have eternal life?” In asking the question, he acknowledges the fact that, despite all his efforts to be a good person thus far, there is something lacking, and he wants to know what else must be done to obtain eternal life. However, he is asking the question from the wrong worldview—that of merit (“What good deed must I do?”); he has failed to grasp the true meaning of the Law, as Jesus will point out to him, which was to serve as a tutor until the time of Christ (Galatians 3:24).

The second thing to note is Jesus’ response to his question. Jesus asks a question in return: why is he inquiring into what is good? Jesus gets to the heart of the matter, namely, that no one is good and no one does good except God. The young man is operating under a false premise: that a good person is able to earn his way into heaven. To make His point, Jesus says that, if the young man wants eternal life, he should keep the commandments. In saying this, Jesus is not advocating a works-based righteousness. Rather, Jesus is challenging the young man’s suppositions by showing the man’s shallow understanding of the Law and human ability.

The young man’s response is telling. When told to keep the commandments, he asks Jesus, “Which ones?” Jesus continues to gently show the man the error of his ways by giving him the second table of the Law, i.e., the commandments that deal with our relationships to other people. You can almost sense the frustration in the young man’s response when he tells Jesus that he has kept all of these since his youth—he insists that he’s been a good person. The young man’s response is ironic. In saying he has kept all those commandments since his youth, he has broken the commandment regarding false witness. If he were truly being honest, he would have said that, as hard as he has tried to keep the commandments, he has failed. He has not been a totally good person. He has a shallow understanding of the Law and an inflated opinion of his own ability. Also, he has that feeling that he is not a good enough person, and he asks Jesus, “What do I still lack?”

Jesus then confronts the young man’s self-righteousness. He tells him that, if he wishes to be perfect—a truly good person—he must sell all that he has and come follow Him. Jesus has perfectly diagnosed the man’s “lack”—his attachment to his wealth. The man’s great wealth has become an idol in his life. He claimed to have kept all the commandments, but in reality he couldn’t even keep the first one, to have no other gods before the Lord! The young man turned his back on Jesus and walked away. His god was his wealth, which he chose over Jesus.

Jesus then turns to His disciples to teach them a principle: “Again I tell you, it is easier for a camel to go through the eye of a needle than for a rich person to enter the kingdom of God.” This was shocking to the disciples, who held the common idea that riches were a sign of God’s blessing. But Jesus points out the obstacle that riches often are, in their tendency to fuel self-sufficiency. His disciples ask, “Who then can be saved?” Jesus answers by reminding the disciples that salvation is of God: “With man this is impossible, but with God all things are possible.”

Who can be saved? If left up to man alone, no one! Why is being a good person not enough to get you into heaven? Because no one is a “good” person; there is only One who is good, and that is God Himself. No one can keep the Law perfectly. The Bible says that all have sinned and fallen short of the glory of God (Romans 3:23). The Bible also says that the wages of our sin is death (Romans 6:23a). Fortunately, God did not wait until we somehow learned to be “good”; while we were in our sinful state, Christ died for the unrighteous (Romans 5:8).

Salvation is not based on our goodness but on Jesus’ goodness. If we confess with our mouth that Jesus is Lord, and believe in our hearts that God raised him from the dead, we will be saved (Romans 10:9). This salvation in Christ is a precious gift, and, like all true gifts, it is unearned (Romans 6:23; Ephesians 2:8–9). The message of the gospel is that we can never be good enough to get to heaven. We must recognize that we are sinners who fall short of God’s glory, and we must obey the command to repent of our sins and place our faith and trust in Jesus Christ. Christ alone was a “good person”—good enough to earn heaven—and He gives His righteousness to those who believe in His name (Romans 1:17). Source

Religion Vs being Born Again