Christmas: Is it Christian or Pagan? Part 2
The origin of the Birthday Celebration

Ezekiel 20:30-32 “Wherefore say unto the house of Israel, Thus saith the Lord GOD; Are ye polluted after the manner of your fathers? and commit ye whoredom after their abominations? 31 For when ye offer your gifts, when ye make your sons to pass through the fire, ye pollute yourselves with all your idols, even unto this day: and shall I be enquired of by you, O house of Israel? As I live, saith the Lord GOD, I will not be enquired of by you. 32 And that which cometh into your mind shall not be at all, that ye say, We will be as the heathen, as the families of the countries, to serve wood and stone.”

Let’s pause and see just where the idea of a birthday celebration came from. It should be noted, that a Satanists highest holy day is the day of their birth! They believe they are their own god, in a sense and worship self! If Jesus were here right now, he would rebuke believers for their participation in another pagan belief. Actually, he is here and is speaking through scripture, which most won’t pick up and read! This is the reason Satan has such a grip on the church body! 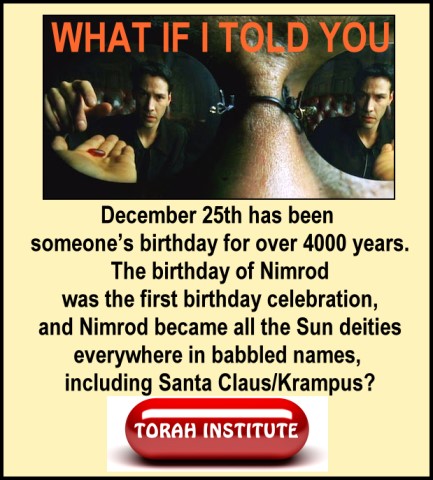 […] “the origins of birthday celebrations lie in the realm of magic and religion. The customs of offering congratulations, presenting gifts and celebrating—complete with lighted candles—in ancient times were meant to protect the birthday celebrant from the demons and to ensure his security for the coming year […] Down to the fourth century Christianity rejected the birthday celebration as a pagan custom.” Source: Schwäbische Zeitung (magazine supplement Zeit und Welt), April 3/4, 1981, p. 4.

“The Greeks believed that everyone had a protective spirit or daemon who attended his birth and watched over him in life. This spirit had a mystic relation with the god on whose birthday the individual was born. The Romans also subscribed to this idea […] This notion was carried down in human belief and is reflected in the guardian angel, the fairy godmother and the patron saint […] The custom of lighted candles on the cakes started with the Greeks […] Honey cakes round as the moon and lit with tapers were placed on the temple altars of [Artemis] […] Birthday candles, in folk belief, are endowed with special magic for granting wishes […] Lighted tapers and sacrificial fires have had a special mystic significance ever since man first set up altars to his gods. The birthday candles are thus an honor and tribute to the birthday child and bring good fortune […] Birthday greetings and wishes for happiness are an intrinsic part of this holiday […] Originally the idea was rooted in magic […] Birthday greetings have power for good or ill because one is closer to the spirit world on this day.” Source: The Lore of Birthdays (New York, 1952), Ralph and Adelin Linton, pp. 8, 18-20.

I post the following info on birthdays here, because the formatting at the author’s website is horrible and not easy to read. Upon reviewing the author’s I discovered some doctrinal errors. However, this writing, I found to be good and scriptural. I split it up and posted the beginning here. A link is provided to the rest at the end should you choose to continue reading the rest.

The Surprising Origin of BIRTHDAYS by William F. Dankenbring http://www.triumphpro.com/birthdays-origin.htm

Where did the custom of celebrating birthdays come from? Did holy men of God in the Bible celebrate birthdays? Is it wrong to celebrate the day of one’s birth? What does the Bible say about birthdays? Here is information you ought to know!

Almost everybody, today, celebrates birthdays. Around the world, friends and relatives hold birthday parties, give gifts to the one being honored, and wish “Happy birthday!” to the one whose birthday is being celebrated.

But why? Where did this universal custom originate?

If you look in the Bible from Genesis to Revelation, you will find no mention anywhere of any of the saints of God observing their birthdays. In fact, strange as it may seem to many, even the exact date of the birth of Jesus Christ is NOWHERE REVEALED in Scripture!

We read in the Encyclopedia Judaica, “The celebration of birthdays is unknown in traditional Jewish ritual” (vol.4, p.1054). It points out that the only reference to a birthday in the Bible is that of Pharaoh of Egypt.

The universal custom of observing Christmas as the birth of Christ, on December 25th, is acknowledged by all the historical authorities as having no basis in actual fact. Jesus Christ was born nowhere near December 25th, in the dead of winter. See our article, “When Was Jesus Born?”

If the very day of Jesus’ birth is deliberately left out of the Bible, doesn’t that fact tell us something? If birthdays should be celebrated, why did God leave the date of His own Son’s birth out of Holy Scripture?

The plain truth is that birth day celebrations are only mentioned twice in the Scriptures — once in the Old Testament and once in the New Testament – and both times in reference to customs being observed by unconverted, pagan people — an Egyptian Pharaoh, and wicked king Herod! Notice what happened on these two instances of “birth day celebrations” recorded in the Word of God.

The Origin of Birthdays

This fact, however, should not be overly surprising. Writes Linda Rannells Lewis in Birthdays, “Birthdays have been celebrated for thousands of years. In early civilizations, where the development of a calendar made an organized reckoning of birth dates possible, the horoscopes of ruling monarchs, their successors and rivals had to be cast with care and birthday omens meticulously examined, for the prospects of the mighty would affect the prospects of the entire society. By the time of Ptolemy V this practice was well established: ‘Ptolemy, the ever living, the beloved of Ptah, the son of the two Brother-Gods, was born on the fifth day of the month DIOS, and this day was, in consequence, the beginning of great prosperity and happiness of all living men and women’” (p. 12).

Ptolemy V was an ancient Egyptian king. It was common in his day for kings and rulers to have their horoscopes made by astrologers and their birthdays were considered very important omens of the future.

Astrology, as the Word of God plainly shows, is a pagan, false religious deception — a fraud and a mythological pseudo-science.

God Almighty says to the daughter of Babylon (Isa. 47:1), the great pagan religious deception which has engulfed the world, “Thou art wearied in the multitude of thy counsels. Let now the ASTROLOGERS, the star-gazers, the monthly prognosticators, stand up, and save thee from these things that shall come upon thee. Behold, they shall be as STUBBLE; the fire shall burn them; they shall not deliver themselves from the power of the flame” (Isaiah 47:13-14).

Writes Lewis, in Birthdays, “Birthday celebrations, even at this early stage, were not strictly reserved for the great rulers. Society adapts for its communal use those practices of the elite which it admires and can afford. In the fifth century before Christ, the Greek historian Herodotus, describing the festivals of the Persians, wrote: ‘IT IS THEIR CUS-TOM TO HONOR THEIR BIRTHDAY ABOVE ALL OTHER DAYS: and on this day they furnish their table in a more plentiful manner than at other times. The rich then produce an ox, a horse, a camel, and an ass, roasted whole in an oven; but the poor produce smaller cattle.”

Lewis continues, “In Egypt households of the same period birthdays were celebrated similarly. A part of the family budget was set aside to buy birthday garlands and animals for sacrifice, just as we might plan to spend a certain sum for balloons, party hats, and an ice cream cake” (pages 12-13).

This author goes on, “Among prosperous Greek families a birth feast, a coming-of-age feast, and feasts after death held on the anniversary of the day of birth were observed, but otherwise there were no annual birthday ceremonials. The birthdays of the immortals were ritually acknowledged once a month, however, the third day of each month being sacred to Athena, Ares, and Saturn, for instance” (ibid.).

The emperors of Rome often went to extreme in their own birthday celebrations. When the first birthday of Drusilla, the daughter of Caligula, approached, the emperor arranged a party suitable for the infant daughter of a “god” (himself). To celebrate her birthday, two days of horse racing were held, and a ritual slaughter of 300 bears, and 500 various beasts from Libya, in the amphitheater of Taurus, was held.

This is a very long article. If you wish to continue reading please click here to finish. Scroll down to “The Command of God”

Continued in Part 3 – Where did Christmas originate?