What University & Military Experiments Prove About Obedience To Authority Figures

Similar to the findings of the Stanford Prison Experiment but in many ways more disturbing was the 1961 “Milgram Experiment” that has since been repeated on numerous occasions with consistent results. 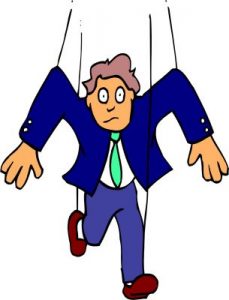 The Milgram test measured the willingness of participants to obey authority figures who ordered them to go against expected restrictions of human conscience in performing acts of cruelty against other study participants.

The original tests began at Yale University in the early 1960s under psychologist Stanley Milgram. At the time, it was just three months into the trial of Nazi war criminal Otto Adolf Eichmann, a German Nazi colonel deemed highly responsible for organizing the Holocaust, and Milgram had designed his test to try to answer the burning question on people’s minds then: “Could it be that Eichmann and his million accomplices in the Holocaust were just following orders?” Milgram came to believe that much of that sentiment was true, and that “the essence of obedience consists in the fact that a person comes to view himself as the instrument for carrying out another person’s wishes, and he therefore no longer regards himself as responsible for his actions.”

Milgram first described his research in 1963 in the Journal of Abnormal and Social Psychology, then later in greater detail in his 1974 book, Obedience to Authority: An Experimental View. Milgram explained how participants were taken into a laboratory and, in the context of a learning experiment, were told to give increasingly severe electrical shocks to another person (who was actually an actor). The purpose of the assessment was to see how far a subject would proceed before refusing to comply with the experimenter’s instructions. 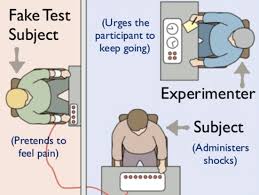 The test used three individuals: #1 was THE EXPERIMENTER—the authority figure running the trial; #2 was THE LEARNER—an actor pretending to be a test subject; and #3 was THE TEACHER—a volunteer who believed he or she was actually to administer voltage to THE LEARNER whenever he or she failed to answer a question correctly. The wiki on the way this test proceeded says the TEACHER and the LEARNER (actor) both drew slips of paper to determine their roles, but unknown to the TEACHER, both slips said “teacher.” The actor would always claim to have drawn the slip that read “learner,” thus guaranteeing that the unwitting volunteer would always be the “teacher.”

At this point, the “teacher” and “learner” were separated into different rooms where they could communicate but not see each other. In one version of the experiment, the confederate was sure to mention to the participant that he had a heart condition.

The “teacher” was given an electric shock from the electro-shock generator as a sample of the shock that the “learner” would supposedly receive during the experiment. The “teacher” was then given a list of word pairs which he was to teach the learner. The teacher began by reading the list of word pairs to the learner. The teacher would then read the first word of each pair and read four possible answers. The learner would press a button to indicate his response. If the answer was incorrect, the teacher would administer a shock to the learner, with the voltage increasing in 15-volt increments for each wrong answer. If correct, the teacher would read the next word pair.

The subjects believed that for each wrong answer, the learner was receiving actual shocks. In reality, there were no shocks. After the confederate was separated from the subject, the confederate set up a tape recorder integrated with the electro-shock generator, which played pre-recorded sounds for each shock level. After a number of voltage level increases, the actor started to bang on the wall that separated him from the subject. After several times banging on the wall and complaining about his heart condition, all responses by the learner would cease.

At this point, many people indicated their desire to stop the experiment and check on the learner. Some test subjects paused at 135 volts and began to question the purpose of the experiment. Most continued after being assured that they would not be held responsible. A few subjects began to laugh nervously or exhibit other signs of extreme stress once they heard the screams of pain coming from the learner.

If at any time the subject indicated his desire to halt the experiment, he was given a succession of verbal prods by the experimenter, in this order:

The experiment requires that you continue.

It is absolutely essential that you continue.

You have no other choice, you must go on.

If the subject still wished to stop after all four successive verbal prods, the experiment was halted. Otherwise, it was halted after the subject had given the maximum 450-volt shock three times in succession.

The experimenter (E) orders the teacher (T), the subject of the experiment, to give what the latter believes are painful electric shocks to a learner (L), who is actually an actor and confederate. The subject believes that for each wrong answer, the learner was receiving actual electric shocks, though in reality there were no such punishments. Being separated from the subject, the confederate set up a tape recorder integrated with the electro-shock generator, which played pre-recorded sounds for each shock level. Source

The amazing findings from this experiment tallied 65 percent of the volunteers (including women) administering the final, massive, 450-volt shock even though they exhibited signs that they were uncomfortable doing so (pausing, questioning, sweating, trembling, biting their lips, digging their fingernails into their skin, and/or laughing nervously), but in the end they did it anyway on the advice of the authority figure (the experimenter). When some ethical criticisms were made in opposition to Milgram following his original study and conclusions (which have since been repeated around the world in different social settings with similar results), he said he believed the arguments developed because his research revealed something disturbing and unwelcome about human nature. He then summarized his findings and warned in his 1974 article, “The Perils of Obedience”:

The legal and philosophic aspects of obedience are of enormous importance, but they say very little about how most people behave in concrete situations. I set up a simple experiment at Yale University to test how much pain an ordinary citizen would inflict on another person simply because he was ordered to by an experimental scientist. Stark authority was pitted against the subjects’ [participants’] strongest moral imperatives against hurting others, and, with the subjects’ [participants’] ears ringing with the screams of the victims, authority won more often than not. The extreme willingness of adults to go to almost any lengths on the command of an authority constitutes the chief finding of the study and the fact most urgently demanding explanation.

Ordinary people, simply doing their jobs, and without any particular hostility on their part, can become agents in a terrible destructive process. Moreover, even when the destructive effects of their work become patently clear, and they are asked to carry out actions incompatible with fundamental standards of morality, relatively few people have the resources needed to resist authority. Source

Besides similarities between the Milgram and Stanford experiments, Philip Zimbardo reveals that none of the few participants who refused to administer the final shocks in the Milgram test insisted that the experiment itself be shut down. And when they were finished with their participation, none bothered to check the health of the victim they believed was potentially severely traumatized and/or physically harmed. Years later, when researchers Charles Sheridan and Richard King speculated that some of the Milgram Experiment volunteers in the role of TEACHER may have suspected their victims were faking the trauma, they set up a similar trial using a “cute, fluffy puppy,” which obviously would not know how to “fake it.” In this case, the electrical shocks were real—albeit, unknown to the participants, harmless.

Their findings—published as “Obedience to Authority with an Authentic Victim”—were reported during the proceedings of the eightieth annual convention of the American Psychological Association and surprisingly verified Milgram’s conclusion. As in the Yale University experimentation, most subjects in the Sheridan-King research illustrated high levels of distress during the ordeal, yet 50 percent of the male subjects and 100 percent of the females obeyed the authority figure and continued to “electrocute” the puppy until the end. Source

Not to be redundant, but again, what could this research suggest the majority of people might be willing to do when the utmost fearsome “authority figure” ever to walk planet earth arrives (a time when Jesus said people’s hearts will fail them for fear [see Luke 21:26]) and begins ordering his followers to kill all who will not accept his leadership?