That and they get power and favor from Lucifer for their Rabid support and Sacrifice!! 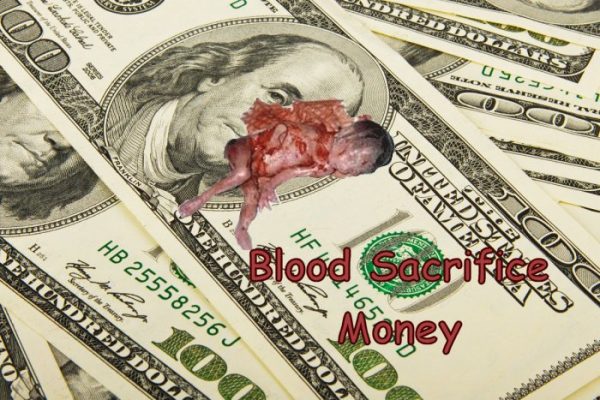 S.D. Wells | Evil News – Seems there are millions of dollars just laying around, folks, made “available” for Planned Parenthood to give away to anyone who supports executing live birth babies on the day they’re born. That’s strange. How did that come to be? Even Republicans, via paid taxes, are involuntarily funding population control by the extreme Left. Now the slush fund from this infanticide “movement” will be used to help Demoncrat-Socialist-Communists win more offices and others keep the ones they shouldn’t even have now.

Great. Murder babies in the womb, in the third trimester, and even on the day they’re born (the day they survive abortion), then use taxpayer money to fund more insane INFANTICIDE laws across America. What a plan. Planned Parenthood is planned genocide. They want black babies and Jewish babies removed from this planet before they ever take a breath. This is no conspiracy theory. They’ve been caught on video paying cash for baby parts. Keep reading.

This is what the Left represents now, and they’re all … “all in” for it. Silence dissent! Anyone on the left that is not completely bowing down to the globalist agenda of population control and the spread of communism will be robbed of the 2020 nomination, just like they did to ROB the one and only Bernie Sanders (the Communist in Socialist clothing) in the summer of 2016. Remember? One crook robbing the other, just like on Batman. It’s the Penguin and the Riddler, folks.

We know that was a “long, long time ago.” Mad, mad Bernie still sided with the serial-killer-Clintons afterwards (they bought him a house), because they ALL want to bring down America, and Planned Parenthood is like a knife in the baby’s heart.

Watch this EXECUTIVE of Planned Parenthood literally haggle over the cash price for the executed baby’s organs during a social event.

Why is Planned Parenthood SUBSIDIZED by American taxpayers?

Why are taxpaying Americans footing the bill for our fellow human’s live-birth-deaths? Doctors are severing babies spinal cords, depriving them of oxygen, choking them to death, or simply leaving them with NO medical attention immediately after they exit the womb (still murder).

That’s what the Democrats are celebrating in New York. Those are the people receiving, from the “ARMS” of Planned Parenthood, small fortunes to the tune of$38 million (indirectly in taxpayer dollars) labeled as “donations.” Why do you think they’re jumping up and down like kids at the candy shop while the legislation is passed to murder children as they’re coming out of the mother, especially minorities.

Have no doubt. People who don’t believe babies have feelings and thoughts in the womb, and rights to oxygen and medical attention when they exit the womb, are twisted or brainwashed.

Planned Parenthood was founded by a racist, genocidal freak, and nothing about the organization has changed, except their ability to brainwash millions of Americans to abort babies that may otherwise live healthy, fruitful lives. They call it medicine. They say “it’s for the greater good.”

But that’s what Hitler said too. Hillary Clinton has thrown that one around the horn a few times. Now we’re hearing it from AOC ­– the new Hitler who’s completely winging it with every word that leaps from her mouth.

Just as Hitler used the “Big Pharma” of the times (IG Farben) to drug and execute his enemies and scapegoats, the Democrats are using vaccines, opiate-based painkillers, glyphosate-laden food, and fluoridated tap water to dumb down, cripple, and control the masses. Obama ran that gamut for 8 solid years.

Everything Obama ever said was a lie. Yet, even Republicans have joined in the sick-care, toxic-food scam too. As did George “W” before Obama. Just like “Slick Willy” and Bush Sr. and Ronald Reagan. They’re all guilty. Guilty as charged.

But population control has never been a bigger political goal, and the Democrats of today have zero ethics, zero morals, hate religion, hate America, and despise human life. That’s why they love Planned Parenthood (which should be renamed Planned Un-Parenthood).

God and all intelligent people please forbid those “Demoncrats” from gaining back the White House in 2020, or we may see America turn into Communist China, where you can only have one child, you can’t ever criticize the government, and food lines are longer than lines for the best rides at Disney World on July 4th.

Trump knows. Keep voting to preserve the Constitution. It’s our only chance to save the Republic. Also, tune in to Trump.News for updates on the nefarious Deep State, that everyone now knows exists and is quite vicious.

Sources for this article include: