The Sodomites, and Apostate Sodomite lovers, in Auburn, Indiana have gotten a church that preaches the True Gospel of Jesus Christ kicked out of the building it was renting. 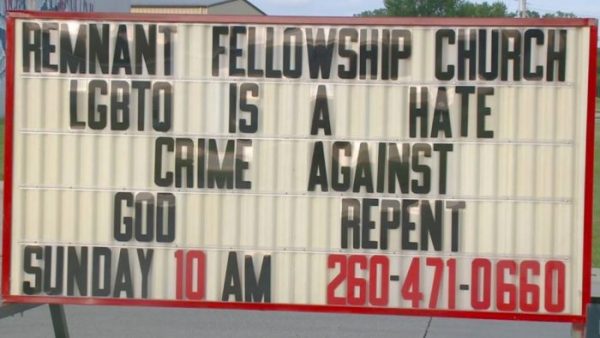 “I felt judged, and I’m not even in that community, but I have family members that are, so it really, really upset me,”

Excuse me, but that is what the Word of God does! It JUDGES and as on can read in Hebrews 4:12 “For the word of God is quick, and powerful, and sharper than any twoedged sword, piercing even to the dividing asunder of soul and spirit, and of the joints and marrow, and is a discerner of the thoughts and intents of the heart.”

Michael F. Haverluck | OneNewsNow.com – The LGBT community is slated Sunday to protest a sign in front of Remnant Fellowship Church (RFC) in Auburn, Indiana, that reads “LGBTQ is a hate crime against God, repent.”

Founded just months ago in April, the small Indiana church reminds passersby of its sign that “God sees your sin” and calls them to repent, and its bold and unapologetic mission makes it clear that it is making no compromises as the End Times approach.

“[S]tand apart from the last days apostate church and stand for biblical truth and faithfulness to God and His Word,” Remnant Fellowship Church’s mission statement reads, according to The Christian Post (CP).

No apologies for biblical warning

After many labeling the sign as “anti- LGBT” expressed outrage, the church did not buckle or apologize to observes who were offended by the sign, arguing that it is called by God to warn sinners and lead them to repentance.

“Put this on church sign to reach a wicked and filthy generation,” RFC explained in a statement on its Facebook page Tuesday. “I pray God grant some repentance and life before the great Judgments about to be poured on this nation – especially the young people who have been sold lies so long and are [fed] a flood of filth every day. Jesus can save the vilest of sinners – many of us were saved out of wicked lives. Nothing is to[o] hard for God.”

Remnant Fellowship leaders went on in the Facebook post to remind viewers that “wrongdoers will not inherit the Kingdom of God,” citing 1st Corinthians 6 to provide Scriptural authority to its warning.

“Do not be deceived: Neither the sexually immoral nor idolaters nor adulterers nor men who have sex with men nor thieves nor the greedy nor drunkards nor slanderers nor swindlers will inherit the Kingdom of God,” the church post added. “And that is what some of you were, but you were washed, you were sanctified, you were justified in the name of the Lord Jesus Christ and by the Spirit of our God.”

Many advocates and members of the local LGBT community in Auburn expressed outrage over the sign, with one resident, Kristin Russell, taking to Facebook to announce a planned protest on Sunday in front of the church.

“I wanted to say a few words about my goals and intentions of this peaceful protest,” Russell posted on Facebook Wednesday. “It is beyond a doubt that some of us have strong feelings about this church/sign and these beliefs, [so] I want everyone who comes to come with open arms and open minds – no hate allowed. Positive, progressive and loving signs are welcome and encouraged.”

The LGBT activist went on to call for peaceful signs to counter the RFC’s call to repentance from sin.

“Positive, progressive and loving signs are welcome and encouraged,” Russel continued. “Bring friends and family. Overall, I would just like the message of loving everyone – despite differences – to get across. Please, please do not bring any negativity with you, and let’s just show this church that Auburn stands with the LGBTQ+ community, and that God and churches can as well! I appreciate the support!”

Russell also took to Twitter to boast about altering the sign on private church property in order to align it with LGBT rhetoric.

“It was unacceptable and needed to be changed, so I took matters into my own hands and did just that,” Russell tweeted

She then informed that she had changed RFC’s sign to reflect the LGBT community’s message of tolerance and acceptance so that it read, “Remnant Fellowship Church Stay Open Minded.”

Russell insisted that the church’s message adversely affected her both physically and emotionally.

“My whole body started to just tense up and shake when I saw it,” Russell claimed. “I drive by that a couple of times a day, knowing that hundreds of people are driving by. I didn’t want that type of thing plastered to my community and to my town, and I really needed it to say something that was more open-minded and loving and more accepting.”

She then indicated that the church’s original message was since restored.

Another supporter of the LGBT community, Tiffany Johnson, told the local news television station that she is upset about the church’s message on the sign.

“It makes me upset,” Johnston expressed to NewsChannel 15. “I’m outraged and disgusted by it – it’s judging people.”

She shared that she has homosexual and bisexual friends and family, contending that she does not want her children to be raised in a hateful world that she says the church’s sign represents.

“I felt judged, and I’m not even in that community, but I have family members that are, so it really, really upset me,” Johnson voiced. “I don’t think it should be up here. I think it should be taken down because all it’s doing is spreading hate.”

No apologies for God’s Word

Robert Sturges, an elder at RFC, said that the sign is not a personal statement of the church – but that it serves as a warning from God found in Scripture, which cautions readers that a man who sleeps with another man is “detestable” to God, who stands against such sexual perversion.

“We’re trying to reach a certain group of people,” Sturges told NewsChannel 15 in an interview. “They’re being told in our culture that homosexuality, transvestites, lesbianism and sexual immorality is OK, but the Bible clearly says that those who practice these things will not inherit the Kingdom of God.”

He considers the sign to be loving warning to those who are destined to hell – an indicated that others in the Church refuse to love sinners enough to alert them to their abysmal eternal destiny if they continue on in their ways.

“In fact, it warns them that the wrath of God will abide upon them – and in the judgment, they will be lost, and they will be sent to Hell forever,” Sturges continued. “We believe that – that’s our faith.”

The elder also alerted viewers to the deceptions of tolerating sin, stressing that fear of man’s rejection is no excuse for Christians to neglect their duty of sharing the whole Gospel message, even though many may consider parts to be offensive.

He asserted that because his church believes in the Bible and stands firm in its beliefs, it will continue to love the lost enough to warn them about impending doom if they do not turn from their unnatural lifestyles.

“We do love them,” Sturges insisted. “But we want to warn them that they are headed toward a cliff, and if they keep going that way, they’ll be destroyed – and that is what the sign is about.”

The Christian leader went on to argue that the LGBTQ lifestyle destroys lives and deceives children to follow a perilous path that leads to a life of pain and suffering.

“Even the schools are telling the kids ‘go ahead and experiment,” Sturges pointed out. “They’re going to destroy kids at young ages. They’re opening themselves up to disease and mental illness and making them the enemies of God, who calls them to sexual purity. That’s why we put the sign up.”

Representing the apostate church to which Sturges referred – which embraces instead of addressing sin in the world – a pastor from a church up the street, First Christian Church (FCC), described the sign as being confrontational and combative.

FCC Pastor Tim Cupka – whose congregation lets people believe whatever they that want regarding sexual orientations and lifestyles – believes that churches must be seeker-friendly and all inclusive … in essence, embracing sinful behavior.

“We’re going to worship in unity,” Cupka insisted, according to NewsChannel15. “Anyone who is pursuing faith is going to be fed. A message like that – that is displayed there – would tend to be exclusive. It would exclude people from that particular denomination or that particular community, and that would not resonate with us at all.”

He then attempted to justify his congregation not challenging sinners to come to repentance – out of fear of a confrontation.

“We’re not going to go head to head with somebody,” Cupka emphasized. “Our job is not to dictate your faith, but to feed you God’s Word.”

Posted with permission from One News Now