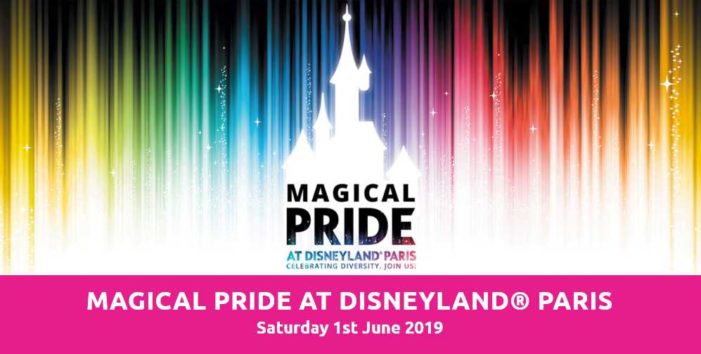 Heather Clark | Christian News – Disneyland Paris has announced that it plans to host its first official “Magical Pride” event on June 1 in observance of homosexual and transgender Pride Month.

“Join us for this celebration of pride at the place where dreams come true,” the site Magical Pride states. “Primarily attracting people from the LGBT community and their friends and families, Magical Pride warmly welcomes anyone and everyone. Come and party, play and stay at Disneyland Paris during this unique event—taking place in June 2019.”

While there have been other pride events at the theme park, 2019 marks the first year that the French Disney park will be holding the offering officially. According to Disneyland Paris, the day will include a parade and dance party, and rides will remain open “late into the night.”

A photo in the online photograph gallery of past observances also shows The Hollywood Tower hotel lit up in rainbow lights.

“Mickey can’t wait to meet guests young and old at the #magicalpride party! We hope he gets a rainbow outfit!” a post on the Instagram page for Magical Pride reads.

“Disneyland Paris … LGBTQ Pride … And one MASSIVE party! I can’t think of a better way to spend the night on 1st June,” another post reads.

As previously reported, last year, photographs and videos emerged of the rainbow Mickey Mouse hat that is being sold at Disney’s theme parks in Florida and California. The red hat features rainbow ears and embroidery of two Mickey hands forming a rainbow heart.

“Disney World got gay ears and I need to get them just to [vulgarity] off old religious people,” one visitor posted to social media.

The company, known for its “Magic Kingdom” and theatrical representations of magical powers and sorcery, has also been including homosexuality in its movies and Disney Channel productions in recent years.

In 2017, the second season premiere of the teen series “Andi Mack” featured a “coming out scene,” as one of the main male characters acknowledged that he is jealous of his female friend’s new relationship as he likes the boy that she is dating.

The same year, an episode of the preschooler-geared Disney Junior cartoon “Doc McStuffins” featured an animated depiction of the lesbian mothers of two children.

Disney also aired its first-ever same-sex kissing scene during a broadcast of its cartoon “Star vs. the Forces of Evil.”

Bill Condon, director of Disney’s “Beauty and the Beast” live-action remake, similarly revealed that that the film would include a subtle “gay moment.”

Condon told the outlet Attitude that homosexuals have had a history with “The Beauty and the Beast” as the man who wrote the lyrics for the animated version of the film, released in 1991, had been fighting AIDS while working on the project. Howard Ashman died before the movie was released in theaters.

“It was his idea not only to make it into a musical, but also to make Beast one of the two central characters,” Condon outlined. “Until then, it had mostly been Belle’s story that they had been telling.”

“Specifically for him, it was a metaphor for AIDS,” he said. “He was cursed, and this curse had brought sorrow on all those people who loved him, and maybe there was a chance for a miracle—and a way for the curse to be lifted. It was a very concrete thing that he was doing.”

Read the rest at Christian News