Is that the same Muslim faith that says women should be completely covered and are slaves to men? 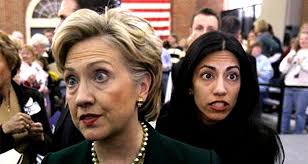 New York Post August 17, 2016 – Huma Abedin said it was her Muslim faith that helped her get through the darkest days of her marriage with sexting fiend Anthony Weiner.

“I tried to block out all the noise and move on with my life,” Abedin told Vogue, saying she relied on her faith and a “really supportive group of friends and colleagues” after her hubby’s sexting derailed his promising mayoral bid.

“That support system enabled us — enabled me — to get up and to keep doing what I thought were the right things for my family and for myself,” said Abedin, adding that her son, Jordan, also helped her pull through.

“I know Anthony has said this before, but Jordan was the best thing that happened to either of us,” added Abedin, who said she has yet to watch the candid 2016 documentary “Weiner,” which charts her husband’s self-inflicted implosion. “Our primary concern was the well-being of our son, and ensuring he had everything he needed to feel loved and cared for and to thrive.”

Abedin, 40, said it wasn’t Weiner’s looks that completed her — it was his smarts and his passion.