I knew in my gut there was something wrong!

Excerpts Daily Mail – Her spokeswoman Stephanie Grisham confirmed that to DailyMail.com on Wednesday, hours after Pope Francis blessed a rosary for her at the Vatican. 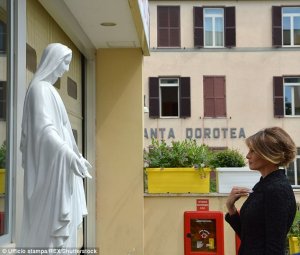 She spent time in prayer at the Vatican-affiliated Bambino Gesù (Baby Jesus) Hospital, and laid flowers at the feet of a statue of the Madonna.

It’s unclear when Mrs. Trump became a Catholic. The president is a life-long Presbyterian, and they were married in a Florida Episcopal church.

Accordingly, Melania and her sister were not baptized and did not make their First Holy Communion with other children their age.

It’s still not clear when Mrs. Trump was baptized into the Catholic faith. Grisham did not immediately respond to a question about that detail. Read more and see pics here.

Well maybe there is hope for her since she has not had the demonic rituals performed on her. All you True Christians pray that the Lord will open her eyes as well as the Presidents and they BOTH are Born Again as the Bible teaches!