Isaiah 5:20 “Woe unto them that call evil good, and good evil; that put darkness for light, and light for darkness; that put bitter for sweet, and sweet for bitter!” 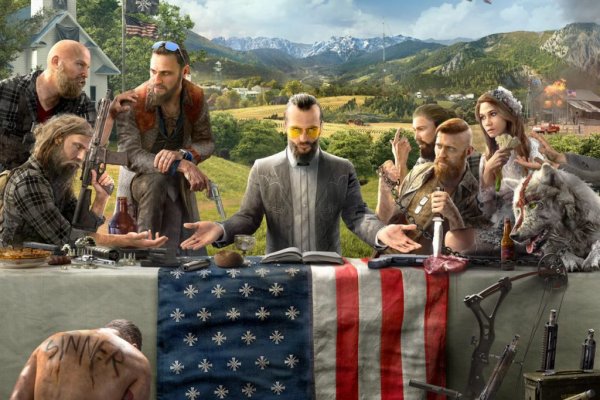 There’s a lot to analyze in the image, which you can view in full below. It features seven characters arrayed around a table à la Leonardo da Vinci’s Last Supper, with the central Christ figure wearing yellow-tinted hunting glasses and sitting in front of an open book […] Of course, there’s one other person we haven’t talked about: the shirtless man sitting cross-legged on the ground, with his hands tied behind his back and the word “SINNER” written on, or carved into, his skin. That brings us back to the religious elements of this artwork, which suggest that these individuals adhere to a perversion of Christianity. Next to the book, in front of the Jesus figure, you can see the elements of the Eucharist: a goblet of wine and a piece of bread. An American flag is draped over the table, except with the stars representing the 50 states replaced by a unique cross. The eight-pointed symbol resembles the Iron Cross, which was last used as a military decoration in Nazi Germany under the direction of Adolf Hitler himself. Source