This is not a nurturing mother. This is a rabid demon in a hate filled religion! 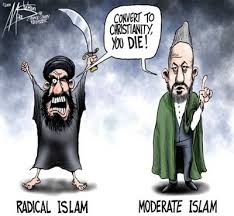 Jihad Watch – This is not “extremist”: the death penalty for apostasy is part of Islamic law. It’s based on the Qur’an: “They wish you would disbelieve as they disbelieved so you would be alike. So do not take from among them allies until they emigrate for the cause of Allah. But if they turn away, then seize them and kill them wherever you find them and take not from among them any ally or helper.” (Qur’an 4:89)

A hadith depicts Muhammad saying: “Whoever changed his Islamic religion, then kill him” (Bukhari 9.84.57). The death penalty for apostasy is part of Islamic law according to all the schools of Islamic jurisprudence.

This is still the position of all the schools of Islamic jurisprudence, both Sunni and Shi’ite. Sheikh Yusuf al-Qaradawi, the most renowned and prominent Muslim cleric in the world, has stated: “The Muslim jurists are unanimous that apostates must be punished, yet they differ as to determining the kind of punishment to be inflicted upon them. The majority of them, including the four main schools of jurisprudence (Hanafi, Maliki, Shafi’i, and Hanbali) as well as the other four schools of jurisprudence (the four Shiite schools of Az-Zaidiyyah, Al-Ithna-‘ashriyyah, Al-Ja’fariyyah, and Az-Zaheriyyah) agree that apostates must be executed.”

Qaradawi also once famously said: “If they had gotten rid of the apostasy punishment, Islam wouldn’t exist today.” 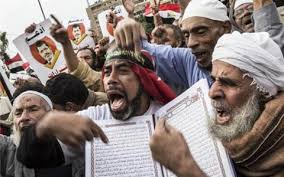 A Muslim woman in a Middle Eastern country ordered that her son be beaten nearly to death because he converted to Christianity.

Christian Aid Mission, which supports ministries around the world that are helping believers in dangerous places, recently reported that Abdel, as the young man is called (not his real name), has remained committed to his faith despite the attacks on his life.

Abdel’s mother was distraught when she learned that he had decided to leave Islam and convert to Christianity, even though he knew he would be shunned by his family.

He had been unable to find work in his home country (also not named) and had been relying on his parents to pay for his apartment and other living expenses. Following his conversion, his mother came to him with a checkbook in one hand, and a burial linen shroud in the other.

“You must choose between the two,” his mother told him.

Despite knowing that his mother was capable of anything, the young Christian replied: “I want to live for Christ and die for Him, no matter what the price will be.”

His mother left, warning that he will “pay the price” for his decision. Abdel was kidnapped by a Muslim gang two months later and beaten nearly to the point of death, with cigarettes burned to his body.

Though Abdel survived, he has been subjected to further financial difficulties from his mother, who has sent people to collect money from him that he says he doesn’t owe….