Update June 26, 2018: Shack author says people can be saved after they die. NOT! See excerpts of article below.

It is the gospel of Joel Osteen, Oprah Winfrey and other disciples of Satan!

Also note that in the movie they will Depict God as a “Curvy Black Woman“! Why God is a curvy, black woman in ‘The Shack’ and some Christian critics say it’s ‘heresy’

Revelation 3:14-22 “And unto the angel of the church of the Laodiceans write; These things saith the Amen, the faithful and true witness, the beginning of the creation of God;15 I know thy works, that thou art neither cold nor hot: I would thou were cold or hot.16 So then because thou art lukewarm, and neither cold nor hot, I will spue thee out of my mouth.17 Because thou sayest, I am rich, and increased with goods, and have need of nothing; and knowest not that thou art wretched, and miserable, and poor, and blind, and naked:18 I counsel thee to buy of me gold tried in the fire, that thou mayest be rich; and white raiment, that thou mayest be clothed, and that the shame of thy nakedness do not appear; and anoint thine eyes with eyesalve, that thou mayest see.19 As many as I love, I rebuke and chasten: be zealous therefore, and repent.20 Behold, I stand at the door, and knock: if any man hear my voice, and open the door, I will come in to him, and will sup with him, and he with me.21 To him that overcometh will I grant to sit with me in my throne, even as I also overcame, and am set down with my Father in his throne.22 He that hath an ear, let him hear what the Spirit saith unto the churches.”

Star of The Shack is “Not the God of the Bible”

Excerpts from WND – “Universalism ends up blaspheming and cursing the truth as revealed in Scripture as Jesus spoke it,” he said.

By “universalism,” De Young means a belief that all of creation is ultimately reconciled to God. He argues this contradicts the Bible and the teachings of Jesus. But “The Shack” gives believers hope that ultimately, no matter what they do or believe, they will end up in heaven along with everyone else.

“In ‘The Shack,’ Paul [Young] has God say, ‘I don’t punish sin, sin is its own punishment,’” said De Young. “In another context, it says there’s not an eternal judgment, an everlasting judgment awaiting people. In his original commitment to universal reconciliation, Paul went much further and denounced any such view that there is eternal judgement at all.

“According to universalism, all people will be purified by the fires of hell. Not judged, not punished, but purified and chastised as it is. And they will repent and all of those in hell will go to heaven, including eventually Satan and his fallen angels. Hell ceases to exist. And this is standard universalism fare, because they argue logically, from reason, that it’s impossible for God’s love to have failed somewhere in the universe. And of course, what they do in saying that is to reject the biblical witness that there is everlasting judgment awaiting those that reject the person of Jesus Christ. So they let reason triumph over revelation.”   Read it all here.

‘The Shack’ Author Claims Unsaved Can Still Be Reconciled to God After Death: ‘I Don’t Think Death Is Our Damnation’

Luke 16:19-31 “There was a certain rich man, which was clothed in purple and fine linen, and fared sumptuously every day: 20 And there was a certain beggar named Lazarus, which was laid at his gate, full of sores, 21 And desiring to be fed with the crumbs which fell from the rich man’s table: moreover the dogs came and licked his sores. 22 And it came to pass, that the beggar died, and was carried by the angels into Abraham’s bosom: the rich man also died, and was buried; 23 And in hell he lift up his eyes, being in torments, and seeth Abraham afar off, and Lazarus in his bosom. 24 And he cried and said, Father Abraham, have mercy on me, and send Lazarus, that he may dip the tip of his finger in water, and cool my tongue; for I am tormented in this flame. 25 But Abraham said, Son, remember that thou in thy lifetime receivedst thy good things, and likewise Lazarus evil things: but now he is comforted, and thou art tormented. 26 And beside all this, between us and you there is a great gulf fixed: so that they which would pass from hence to you cannot; neither can they pass to us, that would come from thence. 27 Then he said, I pray thee therefore, father, that thou wouldest send him to my father’s house: 28 For I have five brethren; that he may testify unto them, lest they also come into this place of torment. 29 Abraham saith unto him, They have Moses and the prophets; let them hear them. 30 And he said, Nay, father Abraham: but if one went unto them from the dead, they will repent. 31 And he said unto him, If they hear not Moses and the prophets, neither will they be persuaded, though one rose from the dead. 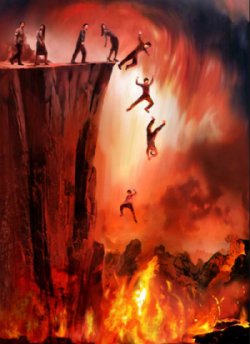 Heather Clark – William P. Young, the author of the best-selling novel “The Shack,” which was made into a major motion picture and decried by some as containing blasphemous and false doctrine, outlined in a recent interview that he believes people are still given chances to receive Christ’s sacrifice after death, remarking, “I don’t think the story is over just because you die.” An acquaintance of Young’s, who has long expressed concern about the popular author, says that he is saddened that some are so willing to accept such false teaching from Young.

Eternity News published an article about Young on Wednesday, sharing content of an interview that it conducted with the writer as it discussed his part in the new documentary “The Heart of Man,” as well as his beliefs about what the consequences are in this life and upon death if the prodigal son does not return to the Father.

“You’re putting a ‘[if you] don’t return’ as if death is the final arbiter,” Young replied.

Young, who also published a controversial book last year entitled “Lies We Believe About God,” said that he holds a different view than most, as he believes that when the Scriptures state that “neither death nor life … shall be able to separate us from the love of God,” it means all men, and not just Christians.

“[E]very time the New Testament talks about the issue of judgment, it talks about krisis—the Greek word for judgment—and it’s a crisis. You’re going to enter a crisis, and I don’t think the story is over; I don’t think death is our damnation,” Young claimed.

He stated that while he believes Jesus is both savior and judge, and that men receive the ramifications of their choices, they can still potentially change their mind as God continues to pursue them.

“I think that Jesus is both our salvation and rightful judge, but that judgment is intended for our good, not our harm,” Young said. “So, what does it mean? Well, you get to experience the losses of your choices, and that’s no fun. I mean it’s devastating.”

When asked if he meant only in this life or for eternity, he said that it depends on whether the person continues to hold to their choice after death.

“[The consequences are] potentially for eternity, if you keep holding on to it. But I don’t think the story is over just because you die,” Young stated. “I think there is an ongoing relational confrontation between the One who knows you best and loves you best. Potentially forever and, potentially, you could say ‘no’ forever. How someone could do that I don’t know, but definitely that tension is held in Scripture for sure.” Read more at Christian News