Answer: They show us how really STUPID they really are! 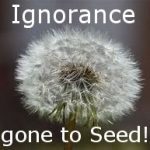 They just parrot false fake news instead of actually researching and telling the truth. But hey — they are of their father the Devil who is a Liar — so what should we expect?

I have already addressed this ignorance in an article “Black Jesus“

Here is the problem People are trying to shape God into “THEIR” image to their liking, instead of wanting to be like Jesus!

2nd Corinthians 3:18 “But we all, with open face beholding as in a glass the glory of the Lord, are changed into the same image from glory to glory, even as by the Spirit of the Lord.”

Romans 8:29 “For whom he did foreknow, he also did predestinate to be conformed to the image of his Son, that he might be the firstborn among many brethren.”

Got news for you scooter, you will NOT be any other Color, Race, Religion… or Age for that matter,  other than what the Lord Jesus Christ is!

NYT Times Article: Jesus Was Likely A ‘Palestinian,’ Not White

Daily Caller – On Friday, The New York Times published a piece by a writer who has reported for the Times as well as edited at the New York Times Magazine in which he never acknowledged that Jesus was Jewish, said it was unlikely he was white, and said he was likely to have been a “Palestinian.”

Eric Copage, who is black, wrote, “As I grew older, I learned that the fair-skinned, blue-eyed depiction of Jesus has for centuries adorned stained glass windows and altars in churches throughout the United States and Europe. But Jesus, born in Bethlehem, was most likely a Palestinian man with dark skin.” In the 600-plus words of Copage’s piece, he never acknowledges that Jesus was Jewish, which is obvious from every text of the Bible; instead, neatly aligning his perspective with the New York Times penchant consistently siding with Palestinian Arabs in disputes with Israel, he only resorts to calling Jesus a Palestinian.

Copage opined, “Now, even though cultures across the world may at times show a Jesus that reflects their own story, a white Jesus is still deeply embedded in the Western story of Christianity. It has become often impossible to separate Jesus and white from the American psyche. … I am also interested in how white Christians feel about images of Christ. How do you feel about the possibility that Christ may not have looked the way he has been portrayed for centuries in the United States and Europe? If you’ve seen Christ depicted as a man of color, what was your reaction?”

As Noah Pollak succinctly noted on Twitter, “The ‘Palestinians are indigenous to Israel’ lie is more commonly believed than I thought. History lesson for NYT editors: Palestinians are Arabs. Arabs didn’t conquer the area until 700 years after Jesus was crucified. Jesus was not an Arab.”

The name Palestine for the area that was home of the Jewish people only came into existence after the Romans exiled the bulk of the Jewish people from Judea in the second century A.D., long after the period in which Jesus lived. Eager to erase the Jewish identity to the land, the Roman emperor Hadrian did something that had heretofore been unheard of for the Romans, who never changed the name of provinces: he named the area “Palestinia” after the Jews’ ancient enemies, the Philistines. The Philistines had been defeated by King David in his memorable defat of Goliath; they were again defeated by David’s descendant King Hezekiah. They eventually were completely defeated by the Assyrians and had ceased to exist long before the Jews fought with Rome.  Source: Daily Wire