The World Health Organization has warned that a new epidemic of the Black Death could see millions of people die from the plague in Africa. 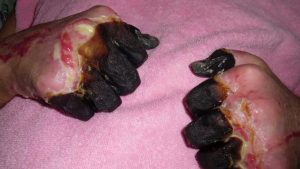 The WHO, which has been working alongside Madagascar’s Ministry of Health, found that 231 people have already been infected with the plague.

Express.co.uk reports: A WHO official said: “The risk of the disease spreading is high at national level… because it is present in several towns and this is just the start of the outbreak.”

The plague has fatality rates of 30 to 100 per cent if untreated and the pneumonic strand is transmitted person to person by air, making it more difficult to control.

The WHO describes pneumonic plague as “the deadliest and most rapid form of plague”.

Nearly 1.2million doses of antibiotics and £11.4million ($15million) worth of emergency funding have been sent by WHO to fight the plague.

Dr Charlotte Ndiaye, a WHO Representative in Madagascar, said: “Plague is curable if detected in time.

“Our teams are working to ensure that everyone at risk has access to protection and treatment. The faster we move, the more lives we save.”

In response to the threat, Madagascar’s government has closed public institutions, including schools and universities, and deployed teams to spray buildings to ward off fleas and rodents.

Large public gatherings, including concerts and sporting events, have also been banned.

People infected with plague usually develop “flu-like” symptoms after an incubation period of three to seven days, according to WHO and typical symptoms include the sudden onset of fever, chills, head and body-aches and weakness, vomiting and nausea.

Copy from Your News Wire