Jihad Watch –  “A Christian teenager in Pakistan was recently abducted and forcefully converted to Islam. And now her abductors are using the country’s legal system to keep her from returning home.”

Pakistan is a jihad-supporting country that implements Sharia and persecutes Christians. The suffering of women and girls there is mostly ignored by feminists. No one sees placards at the Women’s March pleading on behalf of women living under Sharia oppression.

“An estimated 1,000 women from Pakistan’s Christian and Hindu communities are abducted, raped, and forcefully converted to Islam each year. Pakistan ranks as the fifth worst nation in the world when it comes to Christian persecution.” 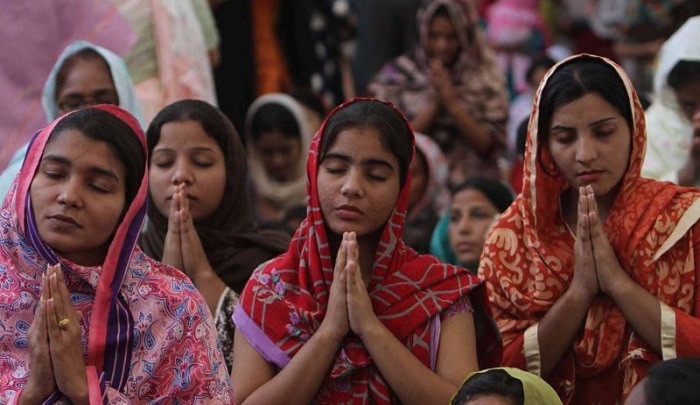 A Christian teenager in Pakistan was recently abducted and forcefully converted to Islam. And now her abductors are using the country’s legal system to keep her from returning home.

When Masih’s family became aware of the Christian girl’s abduction, they reached out to the family of the abductors who told them that she would be returned to them.

However, after eight days, the abductors told the Christian family that Masih was married and had converted to Islam. They then showed the family a marriage certificate which falsely claimed she was 18, an age old enough to get legally married in Pakistan.

When her family protested, the abductors threatened them and warned that if they tried to contact the teen, there would be “consequences of the law.”

ICC notes that abductions and forced conversions to Islam are common for religious minorities in Pakistan, as an estimated 1,000 women from Pakistan’s Christian and Hindu communities are abducted, raped, and forcefully converted to Islam each year. Pakistan ranks as the fifth worst nation in the world when it comes to Christian persecution, according to Open Doors USA’s World Watch List.

William Stark, regional manager for South Asia at ICC, commented to CP, “What is most disturbing in many of these cases is how rape is used as a weapon to entrap victims. For many women in Pakistan, securing a good marriage is the only way to secure a good life. When these victimized women are raped, they feel trapped because it takes away their ability to secure a good marriage due to the shame associated with being a rape victim.

“Another disturbing element of forced conversion cases is the issue of custody. When abductors claim a victim has been married to them, especially when the victim is a woman, they maintain custody over their victim. This makes it especially difficult for Christian women who have been abducted, forcefully converted to Islam, and forcefully married to their abductors to provide testimony against their abductors.”

In recent years, numerous reports have emerged of Christian women in Pakistan being abducted, raped and forced to marry their rapists. Oftentimes, the abducted girls are forced to convert to Islam, which makes their subsequent marriages legal under Pakistani law.

Additionally, Muslims who have abducted Christian girls and women and forced them into marriages have often been treated a level of impunity by local authorities.

Last year, a 12-year-old Pakistani Christian girl was abducted and forced to convert to Islam and marry her abductor, according to World Watch Monitor. When her father attempted to seek legal assistance, he was detained by police for “filing false charges” against her captor.

Eventually, the girl was returned home after she was unable to convince the court that she had willingly converted to Islam……..